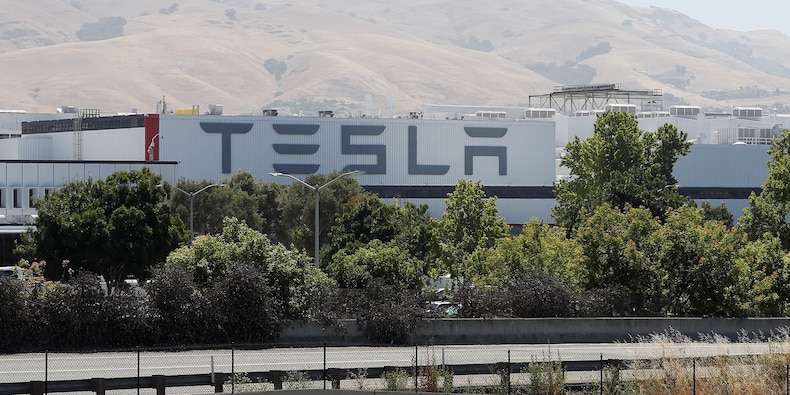 Shares of Tesla slipped as much as 4% on Thursday after a report said the EV maker will idle the Model 3 line at its Freemont, California factory for two weeks.

Staff on the Model 3 line in Fremont were told production would be shut down until March 7 without an explanation, according to unnamed Bloomberg sources.

Analyst Dan Ives of Wedbush Securities said the shutdown is most likely “chip shortage driven” in a note to clients Thursday morning. Ives said he was “not overly concerned” with the supply chain and factory disruption and argued it won’t change “the overall delivery trajectory for 1Q and 2021” for Tesla.

Automobile manufacturers have been facing a severe semiconductor shortage over the past few months.

Semiconductors, also known as chips, are used in everything from cell phones to fighter jets, and rising demand caused by a 5G explosion, cryptocurrencies’ rise, the EV boom, and a number of other factors are leading to serious supply constraints.

Earlier this month the supply issues forced GM to shut down three of its plants, and Ford and GM are expected to lose roughly $4.5 billion due to the shortage.

Despite the shortage, Dan Ives said he still believes the “$5 trillion EV market over the next decade will have many winners around the globe especially with a Biden-driven green tidal wave on the horizon in the US.” Ives sees unit sales out of China driving the Tesla story going forward, instead of bitcoin or a chip shortage.

Still, Wedbush’s Chief Technology Strategist Brad Gastwirth said in a note to institutional investors that he believes the chip shortage will “last longer than what some may believe,” even with a $37 billion relief bill that could come out of Congress.

On Wednesday President Joe Biden said he would seek $37 billion in funding to help supercharge the US semiconductor supply.

“I’m directing senior officials in my administration to work with industrial leaders to identify solutions to the semiconductor shortfall,” Biden said. “Congress has authorized a bill but they need $37 billion to make sure that we have this capacity. I’ll push for that as well.”

Despite this push, Wedbush said they “do not see these actions improving near-term shortages or even creating an environment less susceptible to the current supply/demand imbalance.”

This bearish news for Tesla comes as the company continues to cut prices on vehicles across its lineup and around the globe (1) (2).