BESSEMER, Ala. ― The union election taking place at an Amazon warehouse in Alabama is exceptional in many ways. With nearly 6,000 workers, a victory for the union at this facility would mark the biggest win for organized labor in more than a decade, while creating the first unionized workforce among all of Amazon’s sprawling U.S. operations.

The election is more ordinary in one important respect: Amazon’s aggressive anti-union campaign.

After the Retail, Wholesale and Department Store Union filed an election petition last November, Amazon hired what are known as “union-avoidance consultants” ― members of a specialized industry whom employers tap to help discourage unionization. The company has held what are known as “captive audience” meetings, where workers are forced to listen to lectures about the bad things that could come from organizing a union. Supervisors continue to stop by workstations to urge staff to vote “no.” And workers are on the receiving end of anti-union literature in the mail, on the internet and even in the warehouse bathrooms.

Amazon’s campaign has drawn nationwide criticism from Democratic politicians. It even prompted an unprecedented rebuke from President Joe Biden, who delivered a speech last week condemning “anti-union propaganda” ― a clear reference to Amazon.

Those who follow the labor movement know that Amazon is merely using a scaled-up version of corporate America’s blueprint for fending off union drives: Bring in pricy lawyers and consultants, often paid thousands of dollars a day, to push the boundaries of what’s legal under America’s anemic labor laws.

The tactics are “so typical that it’s truly sad,” said Celine McNicholas, general counsel at the Economic Policy Institute and a former special counsel at the National Labor Relations Board, the federal agency that oversees private-sector union elections.

“It isn’t just Amazon ― this is the standard playbook,” McNicholas explained. Employers collectively spend hundreds of millions of dollars on outside firms “because unions do improve workers’ lives,” she said. “These firms feed off that.” 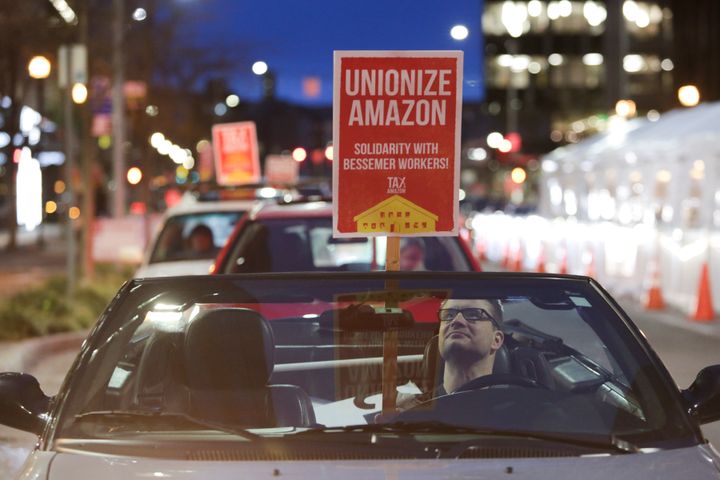 Union-avoidance specialists, and the employers that hire them, must disclose their arrangements to the Labor Department. The full picture of Amazon’s spending isn’t expected to come to light until well after the election has ended, but two union-avoidance consultants have already filed forms describing some of the work their firms are doing for Amazon.

One of them, Russell Brown of Florida, has filed a report noting that Amazon is paying his firm $3,200 a day for each consultant under the contract. The form names two consultants in addition to Brown, suggesting Amazon may be paying Brown’s firm more than $9,000 a day for the work.

Another consultant, David Burke of California, noted in a separate disclosure form that his firm was holding meetings “to discuss the realities of signing authorization cards and voting in the upcoming election.” Burke’s forms did not specify a fee, saying only that the hours would be billed monthly with no cap: “There is no written agreement as to a maximum billing amount.”

Amazon has also used the well-known and high-priced law firm Morgan Lewis, which specializes in dealing with unions. The firm engineered Amazon’s attempt to force in-person balloting during a pandemic. NLRB officials ultimately rejected the company’s arguments, but even failed litigation has its benefits, since it buys a company like Amazon more time to develop and ramp up its counter-campaign.

John Logan, a professor at San Francisco State University who has studied the union-avoidance industry for years, recently wrote that Amazon is “almost certainly” running up a tab on lawyers and consultants in the millions of dollars, based on his research of campaigns in the past.

An Amazon spokesperson declined to comment when asked how much the company has spent so far on the effort.

‘Everyone Needs A Job’

The strategy is so common that union organizers have a term for the preparation that must be done: “inoculation.” It involves explaining in detail to workers what they can expect to see from employers once their campaign goes public, then trying to dispel the spin as it happens in real time.

Joshua Brewer, the union’s lead organizer on the ground in Bessemer, said they’ve encountered the same tactics Amazon is using while organizing poultry workers at other workplaces. What’s different here is the scope of the campaign and the amount of money Amazon has at its disposal. He called the company’s ground game “sophisticated.”

“We all operate in a world where money matters. They don’t,” Brewer said. “For them, it’s power and the ability to manipulate. The money part of this, there is no end to that.”

There are legal limits to what an employer can do. It is illegal under the National Labor Relations Act for employers to discipline workers for their support of a union, to threaten their jobs if they want to unionize, to make promises if they agree not to unionize, or to surveil them. But anti-union lawyers and consultants advise companies on how to walk right up to these lines. They also know the penalties for breaking the law are notoriously weak, and recourse for workers can take years.

These campaigns tend to portray union dues as burdensome and emphasize scary situations involving strikes, suggesting workers could find themselves out of work. (Alabama is a right-to-work state, so workers would not have to pay any union fees if they didn’t want to, while strikes require authorization from the workers themselves through a vote.) Supervisors and consultants cannot explicitly threaten to take away pay or benefits, but they will often suggest that voting for a union will cause workers to lose what they already have.

Those meetings carry a lot of weight if the worker hasn’t heard about the benefits a union could bring, according to Richardson. “They get to some of them,” he said. “Some of them don’t understand what the union can do … They’re scared because everybody needs a job.” 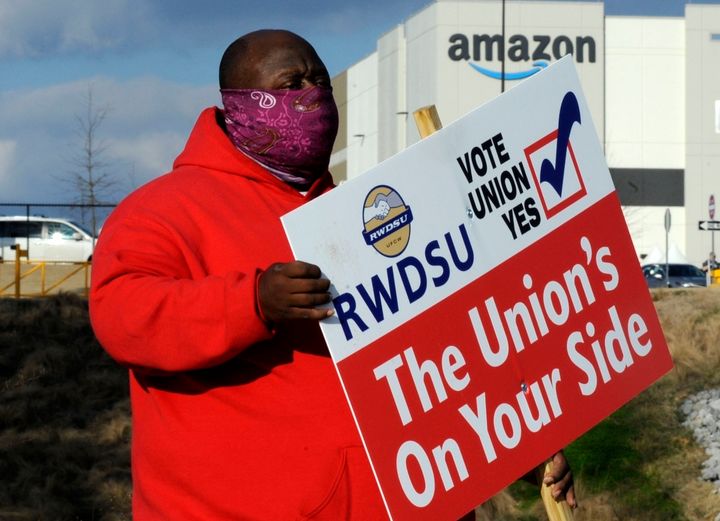 At the Bessemer warehouse, the NLRB’s election rules forced the company to end its captive-audience meetings earlier than it probably would have liked. These meetings must stop within 24 hours of the start of voting, under what’s known as the 24-hour rule. Because the Bessemer plant’s election is happening by mail, that deadline arrived when ballots went out in early February. But it is still legal for supervisors to talk about the union with employees one-on-one. Workers involved in the Amazon drive say those meetings have continued.

Democrats in Congress have been pushing for comprehensive labor law reform that, among other things, would ban captive-audience meetings and increase disclosure requirements on employers and consultants. The Protecting the Right to Organize Act, or PRO Act, passed the Democratic-controlled House on Tuesday, but is almost certain to face a Republican filibuster in the Senate, making it unlikely the reforms would become law any time soon.

The union-avoidance industry caters to employers in both blue-collar and white-collar industries. As labor writer C.M. Lewis recently wrote, the University of Pittsburgh has spent more than $2 million fighting unionization attempts by graduate students and faculty led by the United Steelworkers. One doctoral student told Lewis they received 50 emails about unionization in the month leading up to an election, and it wasn’t always clear who was sending them.

In-person meetings are a fixture of the union-avoidance industry, and even the pandemic may not have slowed the business much. A Maine hospital recently brought in consultants from out of state and vaccinated them in violation of state guidelines, just so they could hold meetings to discourage nurses from unionizing.

Union organizers do not enjoy the same unfettered access to workers that the employer does.

The RWDSU, the union undertaking the Bessemer effort, has the phone numbers of workers in the potential bargaining unit, and has launched a robust phone campaign to reach out to everyone individually, with roughly 100 organizers making calls. But the union cannot require workers to join seminars or even listen to their pitch at all.

While the union has been passing out fliers at the entrance of the warehouse every day for months, some workers worry about being seen talking to an organizer.

One worker, who spoke on condition of anonymity to protect her job, said many colleagues have ignored calls from the union because they were coming from unfamiliar numbers and appeared to be spam. Although she is sympathetic to the union, she didn’t initially answer the calls herself, either.

“I know a lot of people who are misinformed,” she said. “Amazon has grilled them every week.”

Adam Obernauer, an RWDSU organizer spearheading the union’s phone campaign, said the information war is difficult for unions to win. He said the union has succeeded in getting many workers on the phone, but the union can’t pull workers off the floor for a discussion the way Amazon can.

“One thing we hear on the phone is, ‘Why didn’t you guys do classes? Where’s the union? You have to pick your game up,’” Obernauer said. “We would love to be in the room. We would love to be talking to you all. But at the end of day, Amazon has access to you.”

The extent of Amazon’s union avoidance campaign won’t be clear until more disclosures are filed with the government. And while the union has accused Amazon of playing dirty, it has not filed any specific charges with the NLRB alleging Amazon has broken the law. If a union does have viable charges to file against a company, it often waits until after the election to file them in the event it loses the vote.

For now, the union is focused on trying to win the election with less than three weeks to go.

Richardson has been talking one-on-one with his colleagues, trying to rebut what they’re hearing from supervisors who walk the floors and talk to workers about the union. He said the supervisors tend to focus on workers they think can still be swayed.

“They’re coming around the workstations,” he said. “But they skip over me.”