WASHINGTON — The Federal Reserve is poised to cut interest rates for a second time on Wednesday as policymakers try to get ahead of economic risks emanating from a global slowdown, President Trump’s trade war and uncertainty about the road ahead.

Investors largely expect a rate cut, but the decision could be contentious as Fed officials wrestle with mixed economic signals and try to gauge whether Mr. Trump’s sometimes-hot, sometimes-cold trade war is creating economic uncertainty that can and should be offset by central bank action.

Two members of the policy-setting Federal Open Market Committee voted against the Fed’s July rate cut — its first cut in more than a decade — and may dissent against any further reduction at this meeting, given that the economy is growing and unemployment remains near a 50-year low. Another committee member has voiced support for a larger-than-expected cut in the face of global risks.

That discord could make it more difficult for Jerome H. Powell, the Fed chair, to clearly communicate what comes next. The central bank leadership is already under immense political pressure from Mr. Trump, who denounces its reluctance to slash rates more aggressively on Twitter almost daily. The Fed is expected to cut rates just slightly to a range between 1.75 and 2 percent — far above Mr. Trump’s stated desire for zero or negative interest rates.

The Fed operates independently of the White House, and officials say they are cutting rates because uncertainty is mounting and inflation is running below the Fed’s goal. But consumer spending and the job market remain strong, putting the onus on Mr. Powell to explain why the Fed is acting now and whether it plans further moves.

Many investors expect another cut in October and will hang on Mr. Powell’s every word for any hint at timing. But Mr. Powell will probably try to keep the Fed’s options open. He has so far avoided committing the Fed to movement, saying only that it will do what is needed to sustain the economic expansion.

The big question facing the Fed is whether the expansion will need additional support from the central bank.

Inflation has shown signs of moving back toward the Fed’s 2 percent goal, and growth has remained resilient so far. But it is unclear how — or whether — Mr. Trump’s trade war will be resolved. The United States and China are expected to meet again next month, and both sides have taken steps before that meeting to ease their trade fight. But a deal is not guaranteed, and Mr. Trump plans to impose tariffs on nearly all Chinese imports by the end of the year if one is not reached. 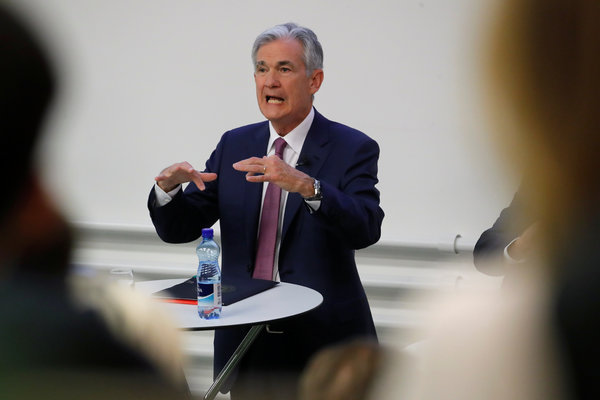 Adding to the mixed economic picture: Household confidence is wobbling, and the global economic picture is tenuous. Germany, Europe’s largest economy, is on the brink of recession, and Britain is grappling with its contentious exit from the European Union.

“The consumer is doing well, but there are other parts of the economy that aren’t doing well: manufacturing being the obvious one, but business investment is weak, and foreign demand is weak,” said Michael Feroli, the chief United States economist at J. P. Morgan, who expects policymakers to cut rates one more time this year. “I don’t necessarily think they have a plan to go again, but I think the economy will continue to look a little soft.”

Heightening Mr. Powell’s communications challenge, the Fed will release new economic projections after the meeting for the first time since June. That means the Fed chair will have to knit his 16 colleagues’ interest rate projections into one comprehensive narrative.

While the Fed is closely monitoring short-term risks, its long-term challenges may be even more daunting. Interest rates will stand below 2 percent if the central bank lowers them this week, leaving policymakers with limited room to cut come the next recession. For context, they lowered rates by more than five percentage points in reaction to the 2007 to 2009 downturn.

“The Fed simply doesn’t have enough firefighting capability at its disposal to fight even an average next recession, let alone a financial crisis — anything that history would later label a Great Recession,” said David Wilcox, who directed research and statistics at the Fed until last year and is now a senior fellow at the Peterson Institute for International Economics. “We run the risk that the next recession will therefore be that much deeper, that much more prolonged — because the Fed won’t be in a good position to arrest downward momentum once it begins.”

Fed officials often say that they have tools left to bolster the economy. Still, they plan to discuss options for conducting monetary policy amid lower interest rates at their upcoming meetings. The conversations so far seems to center on keeping inflation from getting stuck in low gear.

The Fed aims for 2 percent annual price increases, but has not hit that target sustainably since formally adopting it in 2012. That matters in part because inflation gives the central bank headroom to cut interest rates, which do not strip out price gains. Lower inflation makes for even less room to maneuver.

One short-term fix, supported in a recent editorial by Neel Kashkari, the president of the Federal Reserve Bank of Minneapolis, is to promise to keep rates low until inflation moves back to, or even just above, the central bank’s 2 percent goal. In theory, such a commitment would prove the Fed’s seriousness and help to keep consumers’ and investors’ inflation expectations, which have been slipping, from sinking lower. It could provide extra stimulus by making investors expect low rates for longer.

President Mario Draghi of the European Central Bank, which is also facing stubbornly low inflation, made a softened version of that commitment last week.

At the Fed, other ideas up for discussion include aiming for 2 percent inflation on average over a period of time or targeting a price level, rather than a rate of change. Either plan would probably leave interest rates lower for longer after recessions as officials tried to make up for inflation shortfalls.

Some central bank watchers worry that tweaks to the framework could prove inadequate to restock the monetary arsenal, especially because Mr. Powell and his vice chair, Richard H. Clarida, often characterize the rethinking as “evolution, not revolution.”

“I hope that the Fed leadership will not feel constrained from adopting a new inflation control framework, merely because they have said that they’ll be evolutionary,” said Mr. Wilcox, who favors a higher inflation target. He said he also hoped for “an acknowledgment” that “there is a serious risk that our tools will not be adequate for fighting the next recession.”

“They need to give Congress the opportunity to pre-position a fiscal response to the next recession,” Mr. Wilcox said, indicating that the Fed should be transparent about its lack of monetary policy options so lawmakers can start to think of solutions.

The Fed does have more wiggle room than its counterparts in Europe, Japan and the United Kingdom, which have very low or even negative interest rates.

If the global economy tips into outright recession, “the Fed has monetary policy room to address all of that,” Mark Carney, the head of the Bank of England, said in New York last week. “The Bank of England, with various tools, is close, but not all the way there, and the E.C.B. is farther away.”

Mr. Draghi said Europe’s central bankers are unanimous on one point: Fiscal policymakers, the elected officials who make tax and spending decisions, need to step up their game.

But the Fed’s comparatively better position is hardly a bright side, because the American economy could feel the fallout if major global trading partners struggle to combat domestic slowdowns.

“We are carefully watching developments as we assess their implications for the U.S. outlook and the path of monetary policy,” Mr. Powell said last month, noting that “further evidence of a global slowdown” ranked among those risks.