Home » Business » The frackers are back: but will there ever be a British shale gas boom?

Fracking is due to return to the UK this week, as the shale gas company Cuadrilla prepares to start operations at a well in Lancashire – provided it can see off a last-minute legal challenge.

It will be the first horizontal shale well to be fracked in the UK. The drills have penetrated two kilometres deep and later this week Cuadrilla will pump in water, sand and chemicals at high pressure to fracture the rock and release the gas.

It will be the first time since 2011 that fracking has taken place in the UK. This is not a commercial well, and the gas will be flared rather than captured. But could it mark the start of a new fossil fuel boom in the UK?

Who are Britain’s frackers?

Cuadrilla is at the forefront of the exploration drive, with several locations in Lancashire. It was the first company to win a government fracking permit under the UK’s new regulatory regime, for a well at its Preston New Road site, in a farmer’s field between Blackpool and Preston. It has the green light for a second well there too. The firm is also awaiting a government decision on its appeal over another Lancashire site that was turned down on traffic grounds.

Based on an industrial estate outside Preston, Cuadrilla is backed by British private equity group Riverstone, Australian firm AJ Lucas and a subsidiary of British Gas’s parent company, Centrica.

Ineos, a privately owned petrochemicals giant with deep pockets, is the biggest company in UK fracking but is further behind Cuadrilla due to planning battles. Run by Jim Ratcliffe, the country’s richest person, the London-headquartered firm is focused on three prospective shale gas sites in Derbyshire and South Yorkshire, though it holds licences for other areas too.

Then there is iGas, which is developing four sites across Cheshire and Nottinghamshire, some of which Ineos also holds a stake in. Lastly, there is Barclays-backed Third Energy, which has suffered delays and financial setbacks in North Yorkshire, and Aberdeen-based Aurora Resources, which is seeking to drill and frack not far from Cuadrilla’s main site.

So far, Cuadrilla is the only company to have applied for and received permission for fracking.

Is it commercially viable?

Industry figures think anything resembling commercial production is several years off. Ken Cronin, chief executive of industry body UK Onshore Oil and Gas (Ukoog), said: “I’ve said I’d like to see first commercial production site by 2020. I think that is still possible.” That would be incredibly fast for a sector that has been promising to deliver for years, but has been beset by delays. Cuadrilla’s former chairman, Lord Browne, has previously said it would take up to five years and 20-40 wells to ascertain if the UK has a viable shale industry.

Cronin would not be drawn on how many wells would be fracked by the end of the year. But it’s likely that the total could be counted on one hand, given the speed at which companies are progressing. Cuadrilla has planning permission to drill another two wells at Preston New Road, so could in theory have fracked four wells by the end of 2019. Whether others could drill and get permission to frack by then remains to be seen. 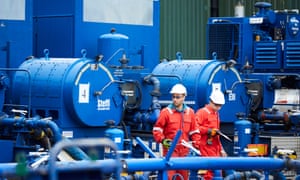 Is fracking a ‘new North Sea’?

Most experts think it unlikely that a shale industry across northern England and the Midlands would match the scale of the North Sea fields, which still supply around half the country’s gas despite declines in recent years.

The British Geological Survey believes there is more than 3.7 trillion cubic metres of gas in the Bowland shale – a formation that runs across most of the north and centre of England. Today the UK consumes about 85 billion cubic metres a year, suggesting shale gas could supply the country’s needs for decades.

But – and this is a huge but – no one knows how much of the gas will make economic sense to extract. Until a number of wells have been tested to see how fast the gas flows out, as Cuadrilla is about to do, fracking’s potential contribution to UK energy security remains unknown.

An industry-commissioned report by EY claimed in 2014 that the sector would create around 64,000 jobs, based on 4,000 horizontal wells being drilled by 2032. So far, just one company has drilled one horizontal well.

There is a debate over how much gas the UK needs in the future, and whether it matters if the UK is increasingly reliant on imports. Around half the UK’s gas today arrives via pipelines or ships.

Cronin said: “If you look at all the forecasts … they all have a significant amount of gas in the system and therefore significant imports. Our view is there is an economic incentive for producing your own gas supply.”

But gas demand has been falling in recent years as homes get better insulated, products become more energy-efficient and renewable sources grow. The government projects gas demand will decline by a tenth by 2020.

Where do the public stand?

Controversially, the government has temporarily stopped asking the public how they feel about fracking, just as it is about to begin. The latest official polling found 32% opposed, 18% in support, with the rest neither for or against, or saying they don’t know. The number opposing shale gas extraction have outweighed those in favour since 2015.

That in part explains why Labour now has a policy of banning fracking, the Scottish government has a shale gas moratorium and the Welsh government has promised to block any applications. Some Conservative MPs have also begun to voice concerns over fracking, in particular the government’s plans to fast-track shale wells through the planning system.

Kate Blagojevic, head of energy campaigns at Greenpeace, said: “The industry have overstated any kind of fracking boom on the scale predicted a few years ago. People used to like to compare us to America: that seems absolutely ridiculous now. The government should see the economics aren’t lining up on fracking.” 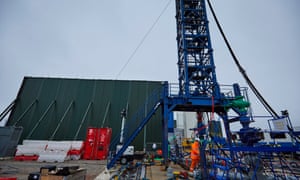 Do the economics work?

This is the key question. The industry not only has to prove it can produce shale gas safely and without local environmental harm; it needs to show it can do so at a competitive price. “Ultimately we will have to compete with pipeline gas and liquefied natural gas [LNG],” said Cronin.

The truth is that because no exploratory fracking has taken place for seven years, no one really knows if it can compete.

Countries including the US and Qatar are ramping up their LNG exports, which are transported via huge tankers, and could theoretically make up the shortfall in North Sea production.

Despite David Cameron’s claim that fracking would bring down gas prices, few expect the industry to grow to a scale where it has any significant impact on pricing.

Oil prices have continued to climb in recent weeks, after concerns US sanctions were hitting Iran’s crude exports in November. With Brent now at a four-year high of $84 a barrel, experts say that it could soon hit $100. Jarand Rystad of Norwegian consultancy Rystad Energy told the Observer he expects $100 oil by Christmas.

High oil prices have helped drag up the price of gas. Natural gas prices have risen in response to stronger than usual demand over the summer as stores were replenished after the cold snap at the end of the last winter.

The shale gas industry says it examines all scenarios and would be resilient with low gas prices as well as high. Ukoog’s Ken Cronin said fracking firms were looking at much longer timescales, but admitted: “Higher prices make it an easier discussion to have [about competing against pipeline and LNG gas]”.