The scale of the downturn hitting the coffee industry is reflected in figures from the countries with the biggest markets.

The world’s biggest cafe market, the US, expects sales at specialist tea and coffee shops fall nearly 11% in 2020 after years of strong growth, according to Euromonitor International.

In China, now the world’s second-biggest market for coffee, sales growth is expected to slump from just over 40% to just 1.6%.

The rise of international chains such as Starbucks and the UK’s Costa, which now operates in more than 30 countries, had spurred strong growth in Thailand, Malaysia, Indonesia and across eastern Europe. But that is set to go into reverse this year.

Southern Europe, especially Italy and Spain, with its traditional coffee culture and a busy tourist industry, has also recorded a big drop in consumption.

As the market has contracted, net imports by coffee-buying countries were down nearly 6% in the three months to the end of June compared with the same period last year, with figures for the US and Japan particularly poor, according to Rabobank, a leading financial services provider for the food sector.

Its analyst Carlos Mera said the market was “not the bloodbath it could have been” with major chains hopeful of a rebound in trade while sales of coffee capsules have grown.

But the pandemic has sent an already volatile coffee market on a rollercoaster ride.

Prices on the global commodity market climbed steeply in February and March as the world stockpiled under the threat of coronavirus. Prices then plummeted by more than a quarter in mid June, when many of the world’s coffee shops closed, before rising sharply again.

The price changes are not only affected by changing demand and fluctuations in the dollar in which coffee is usually traded, according to Mera, but also as a result of investment funds piling into commodities as an alternative to plunging equity markets.

Those changes are likely to have a wide-ranging impact on producers who are already struggling to cope with depressed coffee prices and the effects of climate change which has made growing crops more difficult by, for example, increasing incidence of disease in some regions. 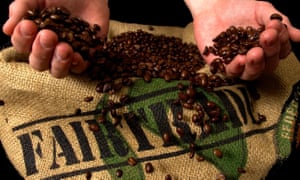 Becky Forecast, supply chain manager at ethical trading group Fairtrade, said: “Volatility of coffee prices has been a big problem and the Covid crisis has exacerbated that.”

She said the changes in price made it difficult to plan ahead and cover costs, making the Fairtrade way of doing business, which guarantees a minimum price for producers, more important than ever.

“That safety is not only crucial for farmer but for the long term sustainability of coffee. If they are not covering the cost of production there is little incentive to carry on [farming].”

The good news for producer countries is that most of the world’s biggest coffee growers, including Brazil, were able to harvest their crops despite the crisis which slowed up transport links.

The effect on roasters has been mixed with those supplying retailers or selling direct online faring much better than those more reliant on the hospitality industry.

Small roasters such as Grind and Ozone often buy beans direct, rather than relying on commodity markets, so these relationships have protected their supply chains during the crisis.

But Forecast says: “There is a big concern that demand won’t pick up again or what people are consuming domestically won’t balance out what they were buying out of home.”