Home » Business » The Growing Fallout From the Super League Fight 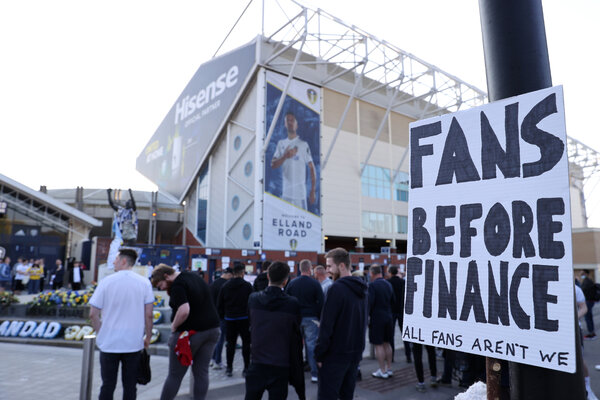 The fallout from the Super League is spreading

The biggest business and policy story in the world at the moment isn’t about taxes or infrastructure. It’s about the fate of European soccer, as the fight over the Super League draws in everyone from Jamie Dimon of JPMorgan Chase to President Emmanuel Macron of France to the N.B.A. star LeBron James.

Critics have denounced the proposed league, which would guarantee 15 of Europe’s top teams a spot, as a cash grab by the richest clubs. We’ve also heard from sports executives who argue that the plan could hurt the economies of cities whose teams are excluded.

JPMorgan, which is backing the plan, faces a backlash. Irate soccer fans denounced the bank for providing over $4 billion to finance the creation of the league. (“#JPMorgan” was a trending topic on Twitter yesterday, and not in a good way.) The bank was brought into the deal through its relationship with the Super League’s chief architect, Florentino Pérez, the billionaire president of Real Madrid. Its bet is that supporting a star-studded competition, in a sport with a gigantic worldwide fandom will pay off in the long run, not least through broadcast rights.

JPMorgan’s involvement was vetted by its internal reputation committee, which assesses high-profile and potentially controversial assignments, according to people briefed on the decision. But that committee didn’t fully expect the emotional reaction from sports fans that has flooded the airwaves around the world, these people added.

Big media and tech companies could get entangled. Many are expected to bid on the broadcast rights for the Super League, with speculation surrounding Amazon, Apple and Facebook. But they may have to worry about more than ratings. Political leaders like Mr. Macron and Prime Minister Boris Johnson of Britain (and even Prince William) have spoken out against the league; is that a fight they want? And do they want to run afoul of FIFA, the sport’s global governing body, or UEFA, its European counterpart, and risk losing out on rights to the World Cup or other high-profile competitions?

Others in the sports world tied to the proposal may get caught in the middle. Mr. James, for instance, is a part-owner of Liverpool, a founding member of the Super League, through his partnership with the Fenway Sports Group. But he wasn’t involved in the club’s decision to join the league, a person briefed on the matter said. Nevertheless, there is growing concern that athletes outside European soccer and minority owners of teams could get pulled into the global debate over the league, potentially putting them at odds with fans of the world’s most popular sport.

The White House seeks to exploit a rift between big business and Republicans. The Biden administration is courting corporate America to support its infrastructure initiative, taking advantage of a rift with Republicans over political and social issues like restrictions on voting rights. But opposition to higher taxes and more regulation may yet reunite the estranged allies.

Exxon Mobil unveils a $100 billion plan to profit from carbon capture. The oil giant said it would make a business based on trapping the carbon emissions of industrial plants around Houston. But the strategy would require government support, including a new carbon tax — which has little political backing.

Amazon is accused of corrupting the recent warehouse unionization election. The union, which lost the vote 2-to-1, said the e-commerce giant had intimidated and surveilled workers. If the National Labor Relations Board agrees with the claims, it could order a new election.

Xi Jinping warns against economic decoupling. In a speech today, the Chinese president called for greater global economic integration and made thinly veiled critiques of America’s efforts to reduce its dependence on Chinese exports like computer chips. “Bossing others around or meddling in others’ internal affairs will not get one any support,” Mr. Xi said.

Oatly files for an I.P.O. The oat milk company — whose backers include Oprah Winfrey, Blackstone and the state-owned Chinese conglomerate China Resources — disclosed in its prospectus that sales more than doubled last year, to $421 million, though it lost about $60 million. It’s reportedly aiming for a $10 billion valuation, betting on the plant-based food trend.

More than 140 racial justice leaders published an open letter in The Financial Times urging asset managers to match their pledges on social and political issues with their votes at coming shareholder meetings. Of top importance: votes on board diversity, racial equity and political spending disclosures.

The top three asset managers have significant power to influence corporate decisions. BlackRock, Vanguard and State Street control about 80 percent of all indexed money, making them a dominant force in the governance of public companies. The activists behind today’s letter — including Rashad Robinson, the president of Color Of Change; Alicia Garza, the principal of Black to the Future; and Derrick Johnson, the president of the N.A.A.C.P. — argue that the money managers are not sufficiently exercising their power:

In 2020, BlackRock voted against all 48 resolutions to expand policy-influence disclosures that received more than 20 percent shareholder support at S&P 500 companies.

Of the 178 S&P 500 companies that had no Black directors as of their 2020 annual shareholder meetings, BlackRock voted to support the entire board at 163 and Vanguard did the same at 166.

The “big three” asset managers made commitments to racial justice after the killing of George Floyd last year. They’ve incorporated that focus into their voting guidelines: BlackRock has said it may vote against directors when it considers a board to be “insufficiently diverse.” State Street said it would vote against certain directors at firms that do not disclose diversity data this year and firms that do not have at least one director from an underrepresented community next year. When it comes to voting rights, BlackRock and Vanguard signed a recent letter opposing “any discriminatory legislation” that would make voting more difficult.

The activists are asking funds to do more, including:

Oppose directors in charge of political spending at corporations that “failed to address their role in funding elected officials” in the Jan. 6 Capitol riots.

The letter sets the stage for a potentially contentious proxy season, targeting specific shareholder resolutions at a host of S&P 500 companies in its “voting guide” for investors. Neuberger Berman, which manages $429 billion in assets, said yesterday it plans to vote against management at Berkshire Hathaway on topics including diversity reporting, which also features in the activists’ guide. “We’re trying to behave like owners and shareholders and help make the company better,” Neuberger’s C.E.O., George Walker, told CNBC.

“Software, data, electronics and biology are changing the world. But they won’t reach every American or ensure national competitiveness without public investment.”

— Brad Smith, Microsoft’s president, on his support for the Biden Administration’s proposed $2 trillion infrastructure plan in a USA Today op-ed. (He did not address the increase in corporate taxes that would pay for it.)

What can public companies reveal through private channels like Discord and Substack?

Yesterday, Mark Zuckerberg announced that Facebook is expanding into audio, including Clubhouse-style chat rooms, podcasting and more. An interesting wrinkle about the announcement was that it was made in a private Discord chat with Casey Newton, a reporter who writes a Substack subscription newsletter.

Facebook sent a message that the traditional gatekeepers are gone. The private channel chat was just one sign; another was Mr. Zuckerberg saying so explicitly. “If you look at the grand arc here, what’s really happening is individuals are getting more power and more opportunity to create the lives and the jobs that they want,” he said of the new media age.

What about fair disclosure? Mr. Zuckerberg was speaking on social media but using a restricted channel. Companies can’t selectively disclose material information but the S.E.C. has said that “most social media are perfectly suitable methods for communicating with investors.” Still, the rules were designed to ensure that no one can get a jump on other investors, so channels don’t qualify “if the access is restricted or if investors don’t know that’s where they need to turn to get the latest news.”

Dan Primack of Axios asked, “So how does revealing big new product news on a private Discord server fit into that?” Assuming Facebook’s product announcement qualifies as material — which given the company’s size it may not — past rulings can help answer this question, which will arise more often as the media splinters into niche networks.

“Issuers must take steps” to let investors know the news channels they’ll use, the S.E.C. wrote in a 2013 investigation of Netflix after its C.E.O., Reed Hastings, posted data about the company on his private Facebook page. The S.E.C. didn’t take action, noting “market uncertainty” about how fair-disclosure rules applied to social media at the time, and said it would consider each case individually.

The co-heads of Credit Suisse’s prime brokerage unit are resigning, after the Swiss bank lost nearly $5 billion from the meltdown of Archegos. (WSJ)

How much sway does the N.R.A. still have? (NYT)

The House approved a bill that would let banks work with cannabis companies where cannabis is legal. (Reuters)

The Treasury Department named John Morton to lead a climate hub, meant to coordinate work on finance, tax and other issues. (Treasury)

Elon Musk asserted that Autopilot hadn’t been activated in the Tesla involved in a fatal car crash in Texas, though he offered little evidence to back his claim. (CNN)

China appeared to shift its tone on Bitcoin by calling it an “investment alternative,” in what industry experts said may represent greater acceptance of crypto. (CNBC)

The downside of missing out on office gossip. (WSJ)

“My whole life, I worked on the idea that government can be an instrument for social progress.” Walter Mondale, the former vice president and champion of liberal politics, died on Monday at 93. (NYT)