Home » Business » The House voted to decriminalize cannabis just a month after 5 states passed cannabis reform measures. Here's the ultimate guide to marijuana legalization: the key dates to know, and which stocks could benefit the most.

The bill, the Marijuana Opportunity Reinvestment and Expungement Act, or MORE Act, would end criminal penalties for anyone who sells cannabis in states where that's legal, decriminalize the use of cannabis throughout the US, and formally allow states to chart their own course in establishing commercial marijuana sales if it becomes law.

The legislation is expected to face an uphill battle in the Senate if Republicans hold on to their majority after the Georgia runoffs in January.

The passage of the bill in the House comes just two days after the United Nations voted to reschedule cannabis and acknowledged the plant has therapeutic value and is not "liable to produce ill-effects." In the US elections on November 3, five states voted to legalize cannabis in some form, meaning that every single cannabis initiative up for a vote passed.

New Jersey, Arizona, South Dakota, and Montana voted in favor of legalizing cannabis for all adults over the age of 21. South Dakota also passed a medical cannabis measure, as did deep-red Mississippi.

To the cannabis industry, New Jersey presents the biggest opportunity. Companies are racing to take advantage of the New Jersey market, which has millions of prospective consumers within the state, as well as easy access to New York City and Philadelphia.

Since Colorado and Washington broke ground in 2012 as the first US states to legalize recreational cannabis, 13 states and Washington D.C., have joined them. Medical marijuana will be legal in 36 states, meaning that a majority of Americans now have some form of access to legal marijuana.

Ballot initiatives like the ones voters considered on November 3 have played a major role in the spread of legal cannabis. The vast majority of states that legalized recreational marijuana did so through referendums.

Though Canada legalized cannabis federally in 2018, the US has not followed suit, and marijuana is considered a Schedule I drug by the US federal government despite the fact that more than two-thirds of Americans have some form of legal access to marijuana.

A historic vote in the House, but a slim chance in a Republican-controlled Senate

The MORE Act's passage in the House, though historic, is largely seen as a symbolic move reflective of changing attitudes in the way that politicians see cannabis.

It's still not clear which party will control the Senate, though the two Democrats up for runoff elections in Georgia during a January 5 special election have voiced support for cannabis decriminalization. Even if both Democrats cinch victories, however, it's not clear their buy-in would be enough to win the 50 votes needed in the next Congress to clear the MORE Act in the upper chamber.

Jeffries analyst Owen Bennett says that at this point, legal cannabis is so widespread that the federal government should be aware of the risks associated with not overseeing the market, as well as the tax revenue from legal marijuana sales it's leaving on the table.

"What's more, this is an area which clearly has bi-partisan support among all voters," Bennett continued. "Of the five states that voted in favor of rec and/or medical legalization, Mississippi, South Dakota and Montana were all Republican wins."

A recent Gallup poll shows that 68% of Americans, including 79% of 18-29-year-olds, support legalizing marijuana.

To put together this ballot tracker, Business Insider tapped a variety of sources to explain the nuances of each state's ballot measures and where polling stood prior to the votes. We've also included market-size projections to give a sense of how important each state could become for businesses and investors.

Here's everything you need to know about the cannabis ballot measures that are set to propel a new wave of legalization:

This article was published on October 9. It has been updated with election results and the results of the House vote on the MORE Act on December 4. 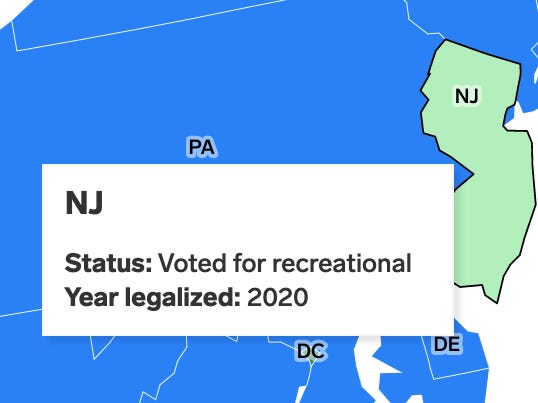 What's in the law: New Jersey residents voted on Public Question 1. Under the amendment, cannabis will be taxed and regulated for adults over the age of 21.

Gov. Phil Murphy has long called on the state to legalize cannabis, though previous efforts to do so through the legislature have fallen flat.

It's not likely that people in New Jersey will be able to legally purchase marijuana for some time. At the very earliest, the constitutional amendment would take effect on January 1, and state lawmakers will need to pass new rules for cannabis markets.

Cresco CEO Charlie Bachtell told Business Insider that he expects New Jersey will have "a lot of wood to chop" when it comes to setting up its recreational program because of a lack of specific detail included in the ballot measure.

The ballot subjects recreational cannabis products to a 6.65% sales tax. Local municipalities with dispensaries will also be able to put their own taxes on marijuana — capped at 2%.

Why it matters: New Jersey is a big market itself. But cannabis legalization in the state has long been seen as a catalyst that could also spur its neighbors — including New York, an economic powerhouse, and Pennsylvania, a swing state — to legalize as well.

The Philadelphia Inquirer published an editorial the Monday after New Jersey's vote, urging the state to move forward with legalization; New York Governor Andrew Cuomo, who has been vocal about the desire to legalize a recreational cannabis program in the past, reiterated in recent weeks the benefits that an adult-use market would have on New York's state deficit following the coronavirus pandemic. 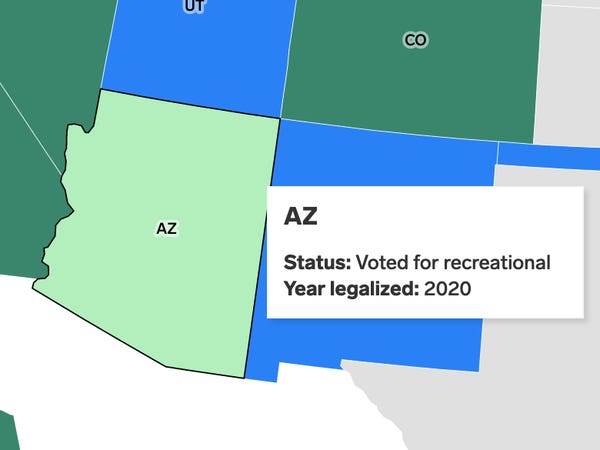 What's in the law: Arizona residents voted to pass Proposition 207, which sets up a regulatory system for the commercial cultivation and sale of marijuana. Adults over the age of 21 will be able to possess up to 1 ounce of cannabis.

The program will be headed by the Arizona Department of Health Services (ADHS), which currently oversees the state's medical marijuana program. ADHS is required to lay out the state's adult-use cannabis regulations by April 5, 2021.

Qualified early applicants, namely medical dispensaries currently operating in Arizona, will be given the opportunity to submit early applications for recreational licenses between January and March of 2021, after which remaining licenses will be distributed by random selection.

At the earliest, a company will be able to submit their application on Jan 19. From there, ADHS has 60 days to make a decision on applications, meaning that sales could begin as early as late March or early April.

Harvest Health & Recreation CEO Steve White told Business Insider that the company plans to follow that timeline. With more than a dozen stores in the state, White says that the passage of the ballot marks "the most significant law change that we could hope for as an organization."

Which companies will benefit: Cresco Labs and Curaleaf, Cowen says. Harvest Health & Recreation also has significant operations in the state.

Why it matters: A 2016 vote to legalize marijuana was narrowly defeated in Arizona after a deep-pocketed opposition campaign. While the opposition was less organized in 2020 than in 2016, the state's Republican governor, Doug Ducey, and the Arizona Chamber of Commerce did not support the measure.

Prospective market size: Up to $790 million in annual sales by 2024, according to Marijuana Business Daily. 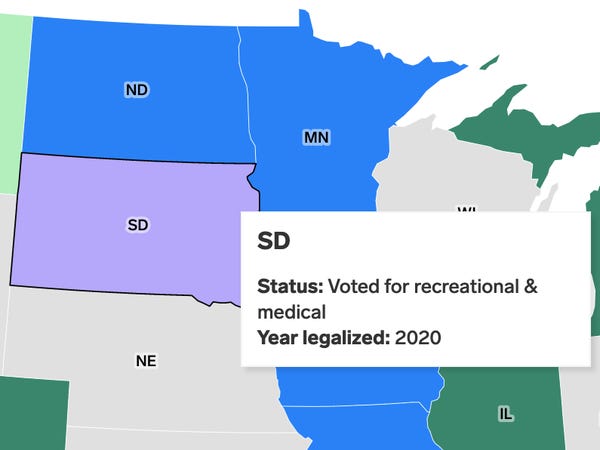 What's in the law: South Dakota passed both medical and adult-use cannabis bills, marking the first time a state has voted in favor of medical and recreational cannabis at the same time.

Measure 26 legalizes medical cannabis and sets up a system to let patients with qualifying conditions get the drug. Amendment A legalizes the consumption and possession of up to 1 ounce of cannabis for adults over the age of 21 and also automatically incorporates Measure 26 as the state's medical program.

It could take some time before South Dakotans can purchase marijuana in the state. State lawmakers and regulators have until April 2022 to craft cannabis rules, such as for dispensaries.

People will be allowed to possess up to 1 ounce of cannabis for recreational use under Amendment A. Under the state's new medical program, patients with "debilitating medical conditions" will be allowed access to cannabis after receiving registration cards from the Department of Health.

Which companies will benefit: While a new market is beneficial to US cannabis companies, South Dakota is likely too small to be of central importance, Cowen says.

Why it matters: South Dakota is the first state to pass a medical and recreational cannabis at the same time. Normally, states have robust medical programs in place before putting the recreational-legalization question in front of voters or the legislature.

Prospective market size: $100 million across medical and recreational by 2025, according to Cowen. 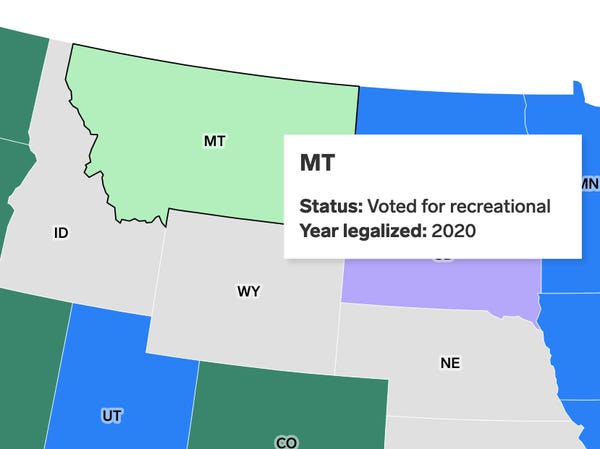 What's in the law: Montana residents voted in favor of two separate cannabis measures to legalize recreational marijuana in the state.

Ballot issue I-190 allows adults over the age of 21 to purchase, possess, and consume cannabis while CI-118 allows the state to set a minimum age for cannabis possession. I-190 also sets up a strict residency requirement for Montana's cannabis industry, meaning local operators will benefit most.

While marijuana will officially be legal on January 1, 2021 for adults over 21 to possess and consume, the state will not start accepting dispensary applications until a year after that, meaning the rollout will take some time.

Which companies will benefit: Montana's law favors local operators over multistate companies. Plus, Montana only has about 1 million residents, meaning that it won't be a large market for any multistate operators.

Why it matters: Montana is a small Western state with a libertarian streak. Though it has voted for Republicans in federal elections since 2008, cannabis legalization is not a highly controversial issue in the state.

Prospective market size: A University of Montana study found that legalizing cannabis could generate $260 million in sales by 2026. 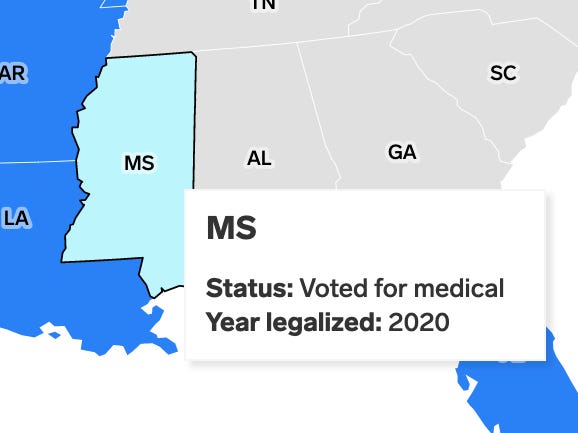 What's in the law: Mississippi residents voted on two competing medical-cannabis measures. Initiative 65, which ultimately won, allows doctors to recommend medical cannabis to patients with qualifying conditions, including post-traumatic stress disorder, cancer, and multiple sclerosis. The measure also allows for the cultivation and sale of medical cannabis in the state.

The competing measure proposed by the state's legislature, Initiative 65A, was more restrictive, and failed to garner support.

Mississippi's new program will be headed by the state Department of Health. The agency has until August 15, 2021, to issue medical marijuana cards.

Qualifying Mississippians will be allowed to possess up to 2.5 ounces of marijuana at one time if they receive a recommendation from a doctor. The state will tax medical cannabis sales at a rate of 7%.

Which companies will benefit: Not specified

Why it matters: Mississippi is the latest deep-red state after Oklahoma to legalize medical cannabis. While it's not likely the state will push for recreational cannabis anytime soon, the move is another clear sign that even strongly Republican states are in favor of increasing access to medical marijuana.