New York (CNN Business)Automatic braking, once a feature available exclusively to high-end cars, is becoming common across the industry, according to analysis from Consumer Reports and the Insurance Institute for Highway Safety.

But the industry has some notable exceptions, including General Motors (GM) and Fiat Chrysler (FCAU), which badly trail rivals in offering automatic braking as standard equipment, according to the safety groups.
Automatic braking uses sensors to apply brakes when a vehicle ahead is stopped, and the car’s onboard computer can avoid or lessen the impact of an accident. It’s an increasingly popular feature with car buyers. Many automakers are emphasizing the feature in their advertising and sales pitches.

Four higher-end brands already had the feature on 99% or better of their vehicles before this past year: Audi, Mercedes-Benz, Volvo and Tesla (TSLA).
Six more have the feature on at least 96% of the vehicles they sold in the United States between September 2019 and September 2020: BMW, Hyundai, Mazda, Subaru, Toyota (TM) and Volkswagen (VLKAF). Three more automakers — Ford (F), Honda (HMC) and Nissan (NSANF), had automatic braking on more than 90% of their US vehicles.

“This voluntary effort is succeeding in getting an important crash prevention technology into vehicles quickly,” said IIHS President David Harkey. “It’s great to see [automatic braking] become a main stream safety feature…not just on luxury cars and SUVs but on affordable models as well.”
Ten automakers promised IIHS and the National Highway Traffic Safety Administration in early 2015 they would make automatic braking a standard feature. That was expanded to 20 automakers in early 2016. That agreement called for automatic braking to appear on almost all of the automakers’ US vehicles by fall 2022.
The voluntary agreement to include automatic braking as a standard feature was designed to introduce the safety systems faster than through a regulatory process.
Ford has made the biggest improvement, putting it on 91% of its vehicles, up from 65% 2018-2019 and just 6% the year before. Another mass market brand, Kia, had automatic braking on 75% of its vehicles, up from 59% the previous year.
By comparison, only 47% of the vehicles that GM sold in the United States in the most recent 12-month period had automatic braking as a standard feature, although that was a large improvement from the 27% of vehicles sold with the feature in the previous 12 months. 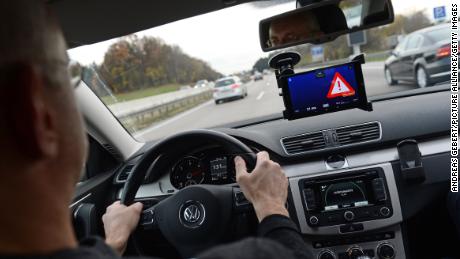 Fiat Chrysler had only 14% of the vehicles sold with automatic braking standard in the most recent 12-month period, according to the analysis from the two safety groups.
GM did not respond to a request for comment. Fiat Chrysler said that it remains committed to comply with the agreement by the 2022 deadline. It said it has automatic breaking on 20 different models already.
Four other smaller brands also trail the other automakers — Jaguar Land Rover, Maserati, Porsche and Mitsubishi.
Mitsubishi had the braking feature standard on 39% of its cars in the past year, but its 2021 models will all have automatic braking according to the analysis. Porsche and Maserati had the feature on 55% and 48% of their US cars, respectively.