There's no doubt about it, major league pitchers are incredible athletes who do amazing things on a daily (or nightly) basis. Most of the time it involves throwing a baseball close to 100 miles per hour and making opposing hitters look extremely foolish.

The record pace for strikeouts and a historically low overall batting average in April are just two examples of how great most pitchers are at their primary job.

But occasionally, pitchers can surprise us with other things we don't expect them to do. That was the case Tuesday night, both at the plate and on the mound.

Shohei Ohtani isn't the only pitcher who's swinging a potent bat this season. Presenting … Huascar Ynoa of the Atlanta Braves.

With the bases loaded and two outs, Ynoa stepped to the plate in the top of the sixth inning in Washington.

Ynoa turned around a 95 mph fastball from the Nationals' Tanner Rainey and launched it 427 feet over the wall in dead center field. It was his second homer of the season and it gave him an impressive .385/.385/.923 slash line in 13 at-bats.

Oh yeah, and he was pretty good at his other job, too. Ynoa (3-1) shut out the Nationals for six innings before giving up an unearned run in the seventh. The Braves went on to win 6-1. 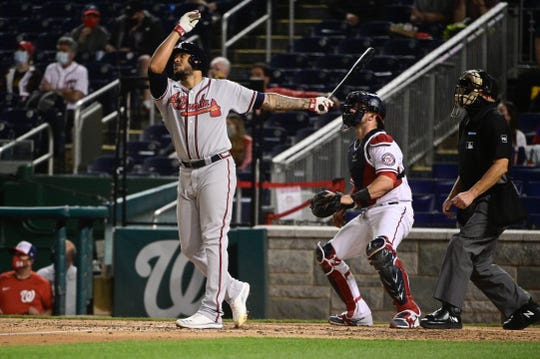