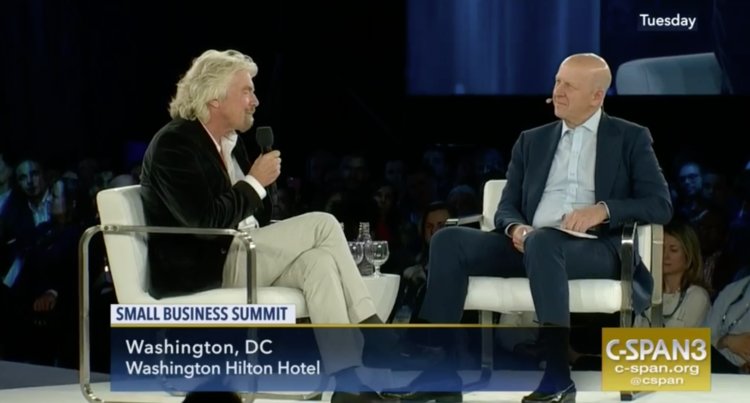 
In mid-February, one month before he became the heir apparent to Goldman Sachs CEO Lloyd Blankfein, co-COO David Solomon was on a stage, cracking jokes with the billionaire playboy Richard Branson, a man whose large, blond mane and puckish, freewheeling demeanor seemed at odds with that of a stodgy white-shoe investment bank.

The contrast was lost on few, least of all the two men sharing the stage at Goldman Sachs’ small-business summit.

“This is a Goldman Sachs conference, sorry,” Branson quipped after drifting into a tangent about his ineptitude at rolling joints despite learning from the Rolling Stones’ Keith Richards, leaving Solomon and the lively audience in stitches.

Two sex jokes later, the founder of the Virgin business empire asked whether they wanted to “change the Goldman Sachs brand quickly and put something else up.”

“It’s an interesting marriage of brands,” Solomon said amid chuckles, before wryly suggesting that Goldman “could move in your direction a little bit.”

Though Solomon’s comment seemingly was said in jest, his desire to make Goldman Sachs a bit more Branson-esque most likely contained a kernel of truth.

If you thought the bank was starting to let its hair down in recent years as Blankfein took a shine to Twitter, prepare for further departures when Solomon, an unorthodox bank executive who famously moonlights as a DJ, takes the helm.

That announcement could come as soon as Tuesday, according to people familiar with the matter.

But given where Goldman’s businesses and its culture are headed, the decision makes sense.

Not only is Solomon an admirer of Branson’s and an occasional guest at the billionaire’s private island — he’s of a similar mold, too.

“He’s a respected manager there — he’s certainly a capable leader,” KBW analyst Brian Kleinhanzl said of Solomon. “It lines up with the direction that they’re moving in that a lot of their growth areas tend to be away from the trading business.”

The CEO for Goldman’s next chapter

Goldman Sachs hasn’t hidden its aspirations of becoming the Google of Wall Street, and Solomon is well-suited for navigating that transition.

Before taking the co-COO role, Solomon was the co-head of investment banking in New York for a decade. In recent years, though, he’s had an intimate role in some of the bank’s less traditional projects, such as its efforts to build the ultimate financial destination for the masses under its Marcus brand.

Key to growing its tech-intensive businesses — which are central to the $5 billion in new revenue Goldman is chasing — will be landing young talent with a skill set different from the classes of traders and investment bankers of years past.

Even a revered brand like Goldman Sachs must compete aggressively to land tech-savvy millennials amid the temptations of a liberated corporate lifestyle offered by Silicon Valley’s top companies.

Solomon could provide a strategic advantage in appealing to young candidates, Kleinhanzl said.

Going with Solomon would show that Goldman Sachs likes to “think of themselves as a tech company — and you have to have some bit of irreverence at the top of management in that kind of company,” Kleinhanzl said. “And David kind of fits that M.O., given his background and given some of his interests.”

Solomon’s trajectory to Goldman Sachs stardom was less than typical— he skipped the Ivy League and studied political science at Hamilton College in upstate New York.

And his presence since becoming a Wall Street exec has been unconventional, and increasingly public.

He has partied with the likes of Diddy and once gave life-changing career advice to the Philadelphia 76ers guard J.J. Redick.

The divorcé and lifelong audiophile has also been spinning records in Manhattan clubs known for being “millionaire playpens” and at beach parties in the Bahamas overrun with bikini-clad millennials.

The Wall Street veteran says that finding and exploring a passion is crucial to longevity in a career known for grinding people down and burning them out.

“If you can’t find a way to have passions and pursue those passions and mix them into your professional life and your personal life in some way, shape, or form, it’s just harder to have the energy to keep on doing this and to keep moving forward professionally,” Solomon said on a Goldman Sachs podcast.

On that front, Solomon has experience making the notoriously grueling entry-level job at Goldman a bit more millennial-friendly. He helped revamp the investment bank’s junior-banker policies, including speeding up promotions and expanding tech platforms that can handle some of the grunt work associated with junior-level banking.

Goldman’s image has been morphing for several years now, and Solomon has played a key role in the initiatives driving the change.

Now that Solomon’s succession of Blankfein is all but certain, expect the 150-year-old investment bank’s transformation into the Google of Wall Street to accelerate.