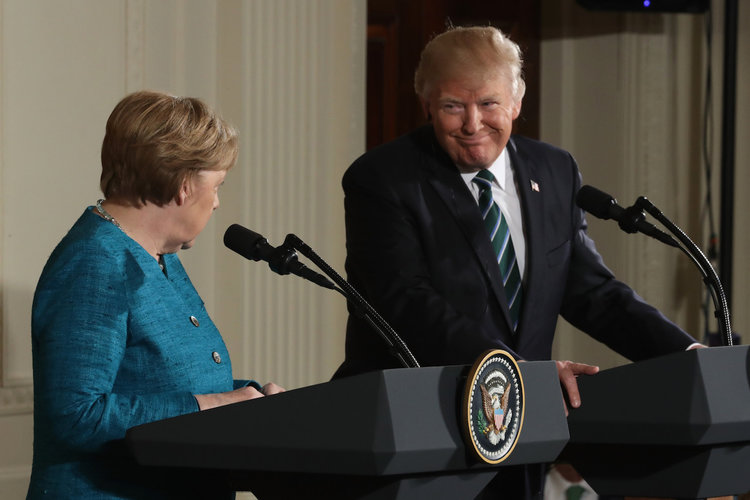 
President Donald Trump followed up on a week of bashing NATO allies on Twitter with an in-person tirade against Germany’s planned energy cooperation with Russia.

In a heated meeting in Brussels with the leaders of NATO, Trump claimed that Moscow now basically controls Berlin because of their dependence on it for energy.

“It’s very sad when Germany makes a massive oil and gas deal with Russia where we’re supposed to be guarding against Russia, and Germany goes out and pays billions and billions of dollars a year from Russia,” Trump told NATO Secretary General Jens Stoltenberg at a working breakfast to open the summit.

“Germany is totally controlled by Russia,” said Trump. “Because they’re getting between 60 to 70% of their energy from Russia and a new pipeline.

A Reuters review of Germany’s official data showed that 35.3% of imports of oil and gas come from Russia.

While Trump has routinely misrepresented the nature of NATO’s funding and how the alliance works to share the burden of mutual defense, he’s correct that energy dependence on Russia from Germany, and all of Europe, gives Moscow influence.

Jorge Benitez, a NATO expert at the Atlantic Council previously told Business Insider: “Russia is so dependent on Europeans buying their energy, that if Europe did even a partial embargo and cut its energy purchases from Russia in half, it would have a crippling impact on the Russian economy and make it impossible for Putin to pay for his foreign aggression.”

Russia’s main source of income is energy exports. As oil prices plummeted over the last few years, Russia’s economy has suffered greatly. But its increasing exports to Europe have helped fund the type of foreign military interventions that NATO was designed to stop.

In 2014, when Russia illegally annexed Crimea, Europe, Russia’s main client, bought almost 30% of their oil from Russia. In January, Russian gas exports to Europe hit an all-time high, with Russia controlling about 40% of Europe’s supply.

The Trump administration has tried to compete with Russia in the energy sector in Europe, but relies on shipping tankers of natural gas and oil, which a pipeline like the German-Russian Nord Stream 2 would likely undercut.

Germany has a big target on its back

A German air force Eurofighter Typhoon taxis toward the runway at Eielson Air Force Base in Alaska before departing for a combat-training mission, June 11, 2012.
Tech Sgt. Michael Holzworth


Trump’s attack comes at a time when Germany, Europe’s biggest economy, spends little on defense and has a woefully unprepared and inoperable military.

Around 35,000 active-duty US troops were stationed in Germany last year.

Germany currently spends 1.24% of its GDP on defense, and has committed to hitting 2% by 2024, something that Trump, and other US leaders before him, have tried to hasten.

But defense spending is unpopular in Germany, and Trump may only make that problem worse. Currently, Merkel is struggling to hold together a weak coalition government.

“I think the president is right,” Mark D. Simakovsky, former Europe/NATO chief of staff in the Office of the Secretary of Defense for Policy, and an Atlantic Council expert, told Business Insider.

“He does need to call for more burden sharing. Allies are not doing enough to provide adequate security. He’s right to go to Europe criticizing and complaining to NATO allies, but he’s not right in using that as the only issue he’s focused on.”

“Germans need to do more and can afford to do more,” on defense spending, said Simakovsky, but “you can make it harder to meet that threshold when Trump is so unpopular.”