(CNN)United Airlines has achieved a high level of compliance with the strict vaccine mandate it set for its 67,000 US employees. But the airline’s CEO doesn’t believe expanding that requirement to passengers is a good idea.

United (UAL) CEO Scott Kirby told CNN that about 90% of the company’s employees have shown proof of their vaccination to the airline. He believes most of the rest have gotten the vaccine but just haven’t gotten around to the uploading their verifications. And so far, very few employees have resigned rather than get vaccinated, he added.
“In a large company, it’s a handful,” he said in an appearance on CNN’s New Day Thursday. “The ones I’m aware of are in the single digit number of people. We’re going to have more by the time it finishes, but it’s going to be a very low number of people.”

Concerns about losing vaccine hesitant employees in a very tight labor market is one of the factors keeping some employers from imposing a vaccine mandate. But last week President Joe Biden announced a federal mandate for companies with 100 or more employees to either require their workers get a vaccine or submit to weekly testing.

Kirby said it’s important to get as many people as possible vaccinated in order to end the pandemic and get the economy — and air travel — fully functioning again. But while travel between some countries requires proof of vaccination, Kirby isn’t endorsing a vaccine mandate on domestic air travel or other forms of transportation.

“I don’t think [mandating vaccination for] air travel on its own will drive a huge increase in vaccination rates,” he said. “I think this employer mandate will drive a really big increase.”
Kirby said the administration’s policy requiring employer vaccine or testing mandates “is probably the most efficient way, as opposed to creating friction in airports, friction in subways, friction across the board.”
Airlines have insisted that federal rules requiring passengers to wear masks, enhanced air filtration and the frequent exchange of fresh air for cabin air during flights make flying safe, even during the pandemic.
United and other US airlines enjoyed a strong summer as leisure travelers filled planes. The rise of the Delta variant and the delay in reopening many offices has slowed the return of business travel that airlines were hoping to see this fall. A vaccine requirement for domestic air travel could keep some additional customers off of planes. 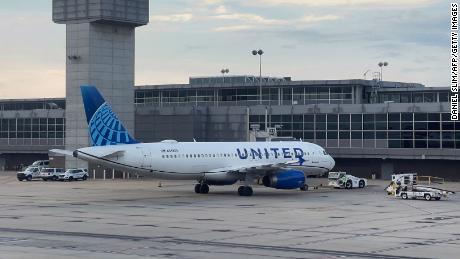 About 20,000 United employees have provided proof of vaccination to the company since the policy was announced August 6, according to a memo sent to United employees Thursday. Workers who upload their proof of vaccination by Sept 20 will be eligible for an additional day of pay.
United employees have until Sept. 27 to comply with the mandate or face being put on leave. Other airlines have not followed suit with their own vaccine mandates, although Delta (DAL) announced that those who do not get the vaccine will have to pay more for their medical insurance and will not be eligible for as much paid sick leave should they come down with Covid.
A projection from Goldman Sachs this week estimates that the Biden administration’s policy, which also requires vaccines for most health care workers, federal employees and contractors and some pre-school workers, will lead to 12 million additional adults getting the vaccine. That’s roughly half of the 25 million unvaccinated workers covered by the rule.

Unlike the federal policy announced last week, United does not allow workers who don’t want to get the vaccine avoid it through weekly Covid testing.
But United employees can apply for a medical or religious exemption from the rules. Anyone whose request for a religious exemption is accepted by the company will be placed on unpaid leave, while those with accepted medical reasons for not getting vaccinated will be placed on medical leave, which may or may not include pay, depending on their union contract.
Source: Read Full Article