Hong Kong (CNN Business)President Joe Biden’s top trade negotiator spoke for the first time with her Chinese counterpart by phone on Wednesday. It’s a sign that Washington and Beijing may be ready to pick trade talks back up, even as relations between the two remain tense.

US Trade Representative Katherine Tai had a “candid” virtual meeting with Chinese Vice Premier Liu He to discuss “the importance of the trade relationship” between the two nations, according to Tai’s office. 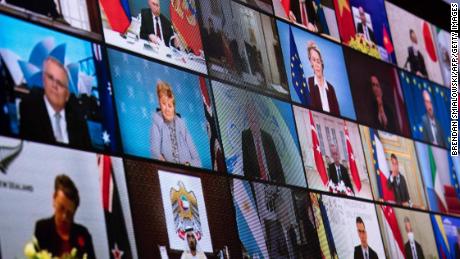 The phone call didn’t mark an official resumption of US-China trade talks, but Tai did discuss “her ongoing review of the US-China trade relationship, while also raising issues of concern,” according to her office.

China’s Ministry of Commerce called the conversation between Liu and Tai “honest, pragmatic, and constructive.”

The phone call was the first of its kind since Biden took office earlier this year. Relations soured under former President Donald Trump, who in 2018 kicked off a trade war with China and accused the latter of unfair trade practices and intellectual property theft. Trump also punished some of China’s most prominent tech companies with crippling sanctions, largely over concerns that they pose a threat to the US national security. 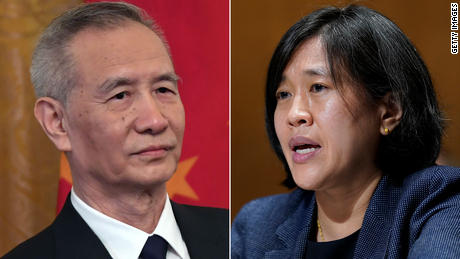 But resetting trade may not be easy just because there’s a change in leadership in Washington.
“The underlying disagreements between the United States and China go well beyond trade,” wrote Morningstar analysts in a research report on Thursday. They pointed out that the US government “has a number of objections to fundamental characteristics of China’s political and economic system,” including the extensive support the government provides Chinese firms.
The two sides have also clashed in recent months on some issues, including alleged human rights abuses in Xinjiang and the origins of Covid-19.
Biden hasn’t reversed Trump administration moves to block certain kinds of shipments from Xinjiang. And on Wednesday, Biden said he has directed US intelligence to redouble efforts in investigating the origins of the pandemic, including whether it might have escaped from a Chinese laboratory. Chinese Foreign Ministry spokesperson Zhao Lijian blasted the US focus on the virus’ origins, saying Thursday that Washington wants “to use the pandemic to engage in stigmatization and political manipulation, and shift blame.”
One meeting between senior US and Chinese officials earlier this year was already contentious. A March summit in Alaska ended with an unusual diplomatic clash.
The US-China relationship still requires collaboration on many fronts, though, the Morningstar analysts wrote. They pointed out that the Chinese economy “is deeply integrated into global value chains and is also a major source of demand for US products and services.” Cooperation on climate is also needed from China, the world’s largest emitter of carbon, to address environmental goals.

China faces headwinds in meeting its trade commitment to the United States.
As part of a preliminary trade agreement reached in January 2020 under Trump, China promised to buy an additional $200 billion of US goods and services through the end of this year. In exchange, Washington agreed to reduce tariffs on roughly $120 billion worth of Chinese imports, though tariffs on $250 billion worth of Chinese goods were left in place.
China is still behind on its trade targets, according to estimates from the Peterson Institute for International Economics in Washington, DC. 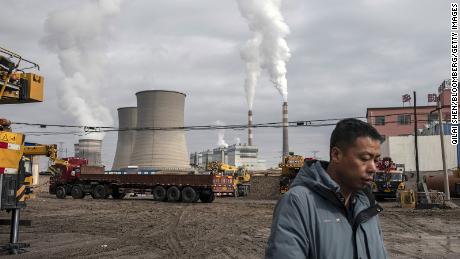 Chinese imports of US goods for this year through April only reached 73% of the year-to-date target, the institute calculated, using data from US and Chinese customs agencies.
A recent surge in commodities prices might also weigh on those goals, too.
Bloomberg reported Thursday, citing anonymous sources, that China is restricting corn imports amid concerns that overseas purchases have spiraled out of control. Corn futures recently hit multi-year highs on the Chicago Board of Trade, leading to surging import costs for international buyers and sparking inflation fears.

China is already worried about soaring commodities prices, which could spell trouble for its economic recovery. Top regulators recently escalated their crackdown on the price surge and summoned major companies in the iron ore, steel, copper and aluminum sectors, warning them that the government has “zero tolerance” for excessive speculation or market price manipulation.
— CNN’s Beijing bureau contributed to this report.
Source: Read Full Article