Just two months after it was tested at Eglin Air Force Base, the F-15Es of the US Air Force used for the first time the new “bomb truck” configuration during an operational mission in the US Central Command theater.

More precisely, six Strike Eagles of the 494th Expeditionary Fighter Squadron relocated to Al Dhafra Air Base (United Arab Emirates) on April 25 as part of an Agile Combat Employment (ACE) operation, bringing with them a heavy load of munitions to sustain combat missions from the new base.

The six F-15Es in “bomb truck” configuration are part of a larger deployment of 18 Strike Eagles of the 494th Fighter Squadron “Panthers,” which deployed from their homebase at RAF Lakenheath to an “undisclosed location” earlier this month.

This location is likely Muwaffaq Salti/Al-Azraq Air Base in Jordan, where Lakenheath’s other F-15E squadron, the 492nd Fighter Squadron “Bolars,” was deployed in 2020. 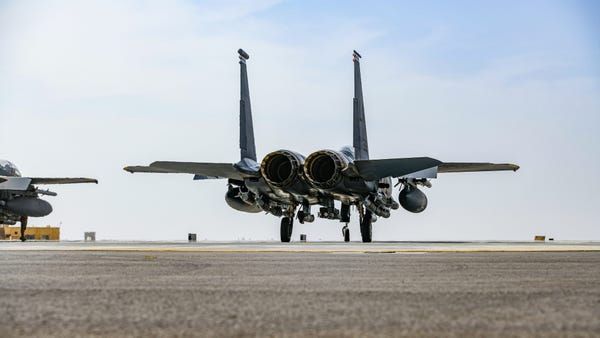 “These F-15Es are carrying what is called a ‘tac-ferry’ load out. What that means is we can maneuver using Agile Combat Employment, and be postured to go forward from a main operating base,” said Lt. Col. Curtis Culver, 494th EFS Director of Operations. “This is the next step for the Air Force in Agile Combat Employment. So instead of having multi-capable airmen that are exercising maneuver and logistics, now we’re doing that with sustained munitions to project power.”

Each of the six F-15Es in “bomb truck” configuration was carrying 12 500-kg-class JDAMs (Joint Direct Attack Munition), both the base GBU-38 and laser-guided variant GBU-54, and four GBU-39 SDBs (Small Diameter Bomb).

In this configuration, the Strike Eagle is actually carrying twice its standard bomb load, as testing at Eglin AFB allowed to clear for use all six attachment points on each “Fast Pack,” instead of just three.

Back then, the USAF noted that not all the JDAMs carried can be employed in a single mission, so it is possible that the six bombs mounted on the upper hardpoints of the “Fast Packs” may not be cleared for release in combat, but only for ferry flights. 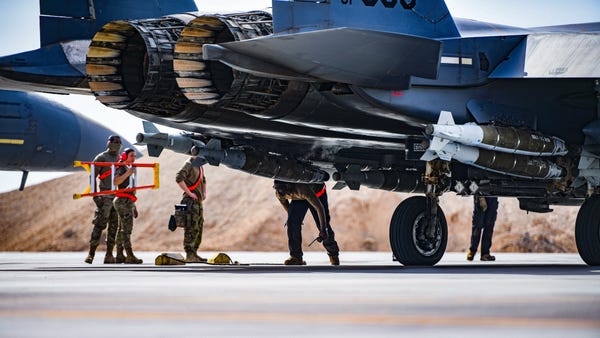 “We were asked to come out and support combat missions with a very short turnaround, and with the bombs not being built previously here for us. By carrying more bombs than we’d actually carry to drop, we’re setting up the initial days of combat,” said Capt. Jessica Niswonger, 494th EFS Weapon System Officer (WSO) and mission planner. After witnessing the arrival of the six F-15Es in “Bomb Truck” configuration, Capt. Niswonger added: “It was a great moment. I’m just glad to have the team here and now we’re going to get ready for combat ops.”

The forward-deployed 494th EFS with its F-15E “bomb truck” aircraft will begin flying air tasking orders immediately to support US Central Command priorities, according to the USAF press release.

It is not clear if the relocation of the six F-15Es to Al Dhafra Air Base is related to the flux of support fires that will protect US troops during the Afghanistan drawdown. Among those we can find four B-52H Stratofortress bombers of the 5th Bomb Wing from Minot Air Force Base (North Dakota) that were deployed last week to Al Udeid Air Base (Qatar).

Training for ACE operations has become routine for US Air Forces Europe units with the goal of being strategically predictable but operationally unpredictable, as it was originally mentioned in the 2018 National Defense Strategy, and capable of operating everywhere with minimal support. 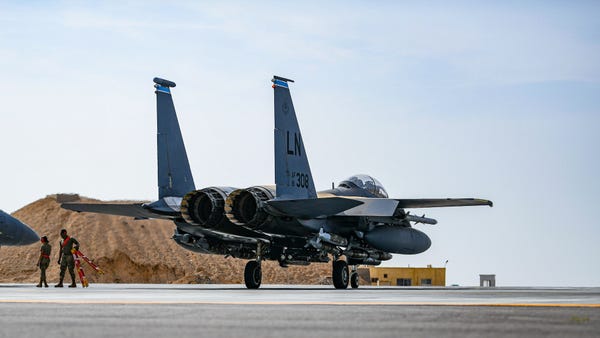 This concept can also be found in the new Air Force mission statement released earlier this month: “To fly, fight, and win … airpower anytime, anywhere”. The ability to fight and win with airpower is considered, in fact, the key factor to facing emerging competitors and near-peer adversaries.

According to the US Air Force, the ACE concept envisions the ability to generate airpower from austere airfields with varying levels of capacity and support in a contested environment, dispersing forces across different or remote airports and support their operations with fewer specialists.

The purpose is “to become more agile in our execution, more strategic in our deterrence, and more resilient in our capability. Agility, Deterrence, and Resiliency are essential to defense and operational capability in a contested environment,” the US Air Force in Europe website says when explaining the ACE Concept of Operations.

The latest ACE training operation is currently in progress in Poland, where 20 F-15s, both E and C variants, and four F-16s deployed from their homebases RAF Lakenheath and Spangdahlem Air Base (Germany), respectively, as part of Aviation Detachment Rotation (AvRot) 21-2.