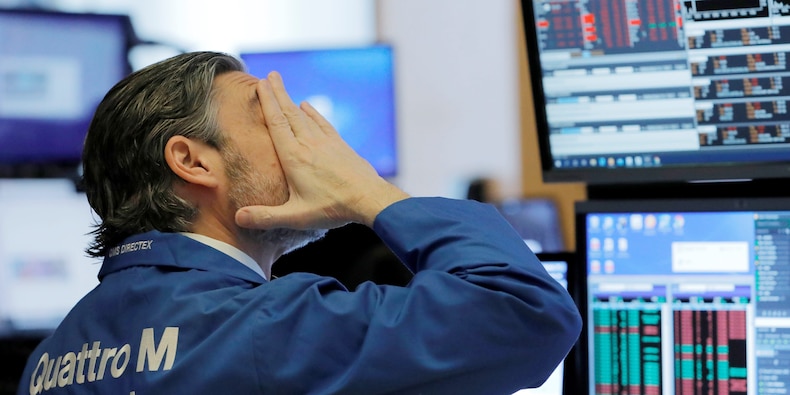 At least 142,755 new COVID-19 cases were reported in the US on Wednesday, according to The New York Times, marking the second straight day of record increases. US cases spiked above 10 million for the first time earlier in the week, and some cities including New York and San Francisco have already implemented new restrictions to slow the virus’s spread.

While hopes for Pfizer’s experimental vaccine boosted investor sentiments earlier in the week, continually soaring case counts have shifted focus back to the virus and potential lockdowns.

Here’s where US indexes stood shortly after the 9:30 ET market open on Wednesday:

Read more: Goldman Sachs says investors should make these 3 trades now ahead of an anticipated 20% stock-market rally over the next year

Rising tech stocks eked out minor gains for the Nasdaq composite. The index trailed its peers earlier in the week as investors dumped mega-caps for cyclical stocks, but it’s since swung higher and largely moved in-line with the broader market.

Thursday’s mild open comes after tech stocks led most of the market higher on Wednesday. The Dow closed just 0.07% lower, and the S&P 500 ended the session just below record highs.

Indexes pared some early losses after new US jobless claims beat estimates and pointed to a steady pace of labor-market improvement. New filings for unemployment benefits fell to 709,000 for the week that ended on Saturday, according to the Labor Department. The reading marks a significant decline from the prior week’s total and handily beats the consensus economist estimate of 731,000. Initial claims have declined for four weeks straight but still remain at relatively elevated levels.

Continuing claims, which track the aggregate total of Americans receiving unemployment benefits, fell to roughly 6.8 million for the week that ended October 31. The reading came in slightly below economist forecasts.

Read more: The CEO of a $3.5 billion investing firm recounts how he went from working in GM’s treasurer’s office to hedging for high-net-worth investors on Wall Street – and shares 2 options strategies that investors can take advantage of now

“Continuing claims for regular benefits extended their decline, but that positive trend continues to be partly offset by the rise in the number of unemployed individuals who have exhausted those benefits, evidence of more long-lasting labor market scarring,” Nancy Vanden Houten, lead US economist at Oxford Economics, said.

Moderna gained after announcing it has enough data to begin the first interim analysis of its coronavirus vaccine’s effectiveness. Separately, Anthony Fauci, the US’s leading infectious-disease expert, said he was optimistic about Moderna’s upcoming trial data.

Bitcoin surged above $16,000 for the first time since January 2018 as the cryptocurrency’s rally resumed. The token has broken above several key resistance levels in recent weeks but remains a ways away from retaking its all-time high of nearly $20,000.

Spot gold gained as much as 0.8%, to $1,879.85, at intraday highs. The US dollar edged higher against a basket of peer currencies and Treasury yields dipped.

ETF investing is exploding globally. But to get more than market returns, a Fidelity International ETF expert says investors might need to leverage this secret ingredient