New York (CNN Business)Peloton is estimating its treadmill recall will cost the company about $165 million in lost revenue during the the current quarter, and result in a $16 million hit to its profits.

After weeks of fighting a call by federal safety regulators to recall its Tread and Tread+ treadmills tied to one infant death and reports of 70 injuries, the company admitted Wednesday it had made a mistake and would recall the product. On Thursday evening, it told investors how much it would cost its top and bottom line.
CEO John Foley again apologized for not moving sooner to agree to the recall, and admitted that the company’s reputation had been damaged by the recall dispute.

“We feel like we have some work to do to get back on the right side of the line with trust and safety, and let people know what we stand for,” he told analysts. “I think yesterday was a big day in mending trust and telling the market and our consumers and our members that we’re going to prioritize safety…. to say we’re going to take some short-term financial pain to be able to invest in building something that’s built to last for decades where our brand is pristine.”

The company said $50 million in lost revenue would come from refunds to owners of the treadmill who want to return them, roughly 10% of the units that are already in the hands of customers. CFO Jill Woodworth admitted it is difficult to estimate the number of units that will be returned.

Another $105 million of lost revenue will come from lost sales in the quarter, and $10 million from lost subscription revenue. Beyond the lost revenue, the company said its costs will increase from paying to ship the returns. The company will even pay to have someone move the treadmills from one room of an owner’s house to another if they would prefer that option instead of having it returned to the company.
Last month the US Consumer Product Safety Commission released a video showing a small child playing with a powered-on treadmill while it lifts off the ground and the child becomes pinned under it. The federal safety agency urged people to stop using the treadmill, but it did not have the power to unilaterally order a recall.
The CPSC released details of other incidents, including a child being injured when an adult was using it and “pets and objects” also being pulled under the treadmill by the belt that people walk or run on.
The company said it is working on some hardware fixes to stop anything from being pulled underneath. It said it will issue a software update within days that would be a lock-out feature to stop anyone but the owner from being able to turn on the treadmill. 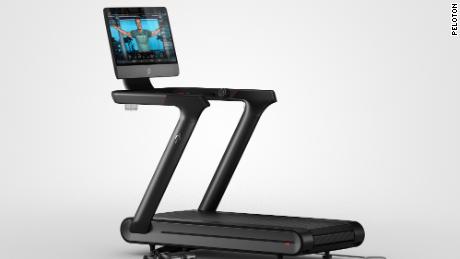 “Bear in mind that hardware features take time to develop, test and manufacture, and in this case, the CPSC will need to approve our proposed enhancements,” said Foley. “While this process typically takes 6 to 8 weeks, it could take longer, so we can’t offer an on sale or revised launch date at this time.”
The company achieved rapid growth during the last year as people limited to being at home purchased its equipment subscriptions. The company’s revenue in the first three months of the year more than doubled to $1.3 billion from $525 million a year ago. During the nine months ending March 31, revenue rose to $3.1 billion from $1.2 billion.
Some of that growth is starting to slow as normal activities begin to return, said Woodworth.
“As anticipated, global [exercise bike models] have been tapering from covid highs,” she said. “However, our unit sales remain significantly higher than pre-covid levels.” She said the company expects the number of exercise bikes it sells from April through June this year to be three times higher than there were in the same months of 2019 — a year before the pandemic.
The explosive growth has come with rapid increases in costs. And even with the increased sales, the company reported a net loss Thursday of $8.6 million for the first three months of 2021. That was down from $55.6 million it lost in that period last year.
Part of the loss is due to seasonal, post-holiday factors, as it has posted a net income of $124.2 million over the last nine months, compared to a net loss of $160.7 million in the year-earlier period.