In just a few years, Vikram built a giant quality-driven automobile manufacturing system that had percolated to the supply chain and the automotive ecosystem in southern India, says Venu Srinivasan. 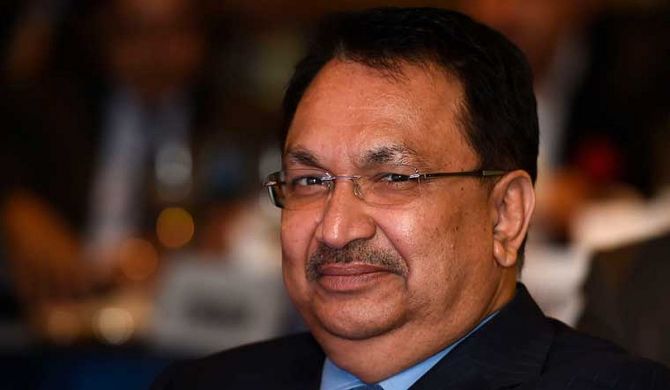 With much sadness, so many of us woke up to the news that Vikram Kirloskar, vice-chairperson of Toyota Kirloskar Motor, had passed away late Tuesday.

As I reminisce on the nearly 40 years I have known him, I can unequivocally say that he had such a rare and deep understanding and passion for automotive manufacturing that it would make Toyota, which pioneered the Toyota Way, proud.

Many of us know Vikram as the man who brought the iconic Japanese carmaker Toyota to India.

But few know the back story and hard work that went into creating a system of manufacturing that was everything Toyota could have hoped for and then some more because it was perfectly calibrated for manufacturing in India.

A mechanical engineer from the Massachusetts Institute of Technology, Vikram put his degree to work.

Vikram didn’t leave it to his battery of engineers to create the blueprint for Japanese manufacturing in India.

Instead, he spent weeks and months shadowing the general manager of Toyota on it’s shop floor, learning every nuance, understanding every machine function, absorbing it, and thinking of how it could be better.

His philosophy was that if it had to be done, it should be in the best possible way, and if that meant he had to get his hands dirty on the shop floor and ask a million questions, he would do it.

His lineage and family wealth never got in the way of the engineer and learner in him.

When he returned to India after learning on the Toyota shop floor and got to work, he very nearly erased all signs of manufacturing that the Indian automotive units were used to.

He redesigned the shop floor to amplify the lean manufacturing methods he learned at Toyota.

I still remember him showing me the manufacturing design and taking me around the factory floor, and it was a remarkable change — with the unmistakable attention to detail that was Vikram’s hallmark.

Even more interesting was that he had gotten rid of excessive automation that would be important in Japan but unnecessary in India.

He knew he had to create jobs and livelihoods in his country, but that quality and process could not be sacrificed.

And so, in just a few years, Vikram built a giant quality-driven automobile manufacturing system that had percolated to the supply chain and the automotive ecosystem in southern India.

Behind the face of the solid engineer was also an affable man who was immensely easy to be with and well-liked.

In a rare acknowledgement of how personable he was, those who knew him closely knew that he had a very deep friendship with the founding family of Toyota.

They regarded him as one of their own.

With his commitment to excellence, he had made his way into their minds and hearts.

He was also a great captain of industry, and he led both the Confederation of Indian Industry and SIAM (Society of Indian Automobile Manufacturers) with great empathy and presence.

His love of people shone through when the Covid pandemic kicked in, and Vikram ensured his suppliers got the help they needed to tide over the challenges they were facing.

He worked with the state to get the local communities the help they needed for hygiene kits or food.

Vikram, with his humility, immense goodwill and warmth, will always be missed.

But he will stay with us through his lasting legacy of world-class processes and manufacturing systems that help power millions of vehicles on our roads, not just in India but elsewhere in the world.