One of the most visible trends in 2019 has been that more and more brands are getting ‘human’ as the circle of trust on social media tightens.

It was in fact a crisis year… the Cambridge Analytica scandal and the subsequent Facebook Congressional hearings led to greater demand for improved confidentiality, greater data security, better ethics, and enhanced transparency.

Twitter too faced a lot of heat because of the huge number of bots on its platform and was forced to purge millions of fake accounts; as a result, over 60 per cent of users no longer trust social media.

This has forced smart brands globally to focus less on maximising reach, and more on generating transparent, quality engagements that are immersive.

As a result, more than 64% of the top brands in a Hootsuite survey in the US said they have either implemented Instagram Stories into their social strategies or plan to do so in the next 12 months.

Today over a billion users on social media use Stories as the primary way to share things with friends and family.

In India, however, very few brands and their creative partners understand the true meaning or intent of social media Stories.

Currently, for Indian digital agencies and most clients, Stories are really, and actually, visual stories seen on a smart-screen as opposed to television… cheaper, digitally shot, long narrations, mostly with a societal twist, and released first on YouTube.

So, based on this understanding and interpretation of digital ‘stories’ the highly controversial HUL Brooke Bond Kumbh Mela film and the Surf Excel Ramzan ad which too generated a maelstrom, were created.

Both touted as Stories but actually just long duration videos that told a story.

The nuance and the differentiation in the digital ideation and execution is still not being fully comprehended by content creators and their clients in India.

The much acclaimed Gillette ad with the daughters as barbers or the PregaNews ad with the transgender protagonist are in the same mode: Good, engaging stories, great creative renditions; but not really Stories as social media actually understands them.

There are brands around the world that have excelled at Stories. J Crew, the clothing company, for example, created an exclusive pre-sale of its new rose-coloured Jane-in-Pink sunglasses, through a pink-themed photo-shoot which promoted the limited availability of the new range.

The sunglasses were a sell-out because of the differentiated handling of the product narration which had curiosity, intrigue, envy, and even a bit of greed built into the communication.

However, rather than just display the pictures of beautiful travel destinations around the world, the company transforms each photograph into an interactive quiz.

Viewers are asked to identify the specific destination shown in the story through a poll feature.

And after the reveal, viewers are prompted to ‘swipe up’ in order to activate the incorporated link that directs them to the company’s Web site.

Nike cleverly weaves Instagram Stories around the lives of not only famous athletes but also shares the journeys of inspiring customers — the most famous being the one about the 700-pound man working to drop his extra weight.

It is a fascinating portrayal that engages, excites, and entertains, all while showcasing the Nike product being used.

Indian creative and digital agencies seem to be completely missing the mark with using social platforms like Instagram, Snapchat, and even Facebook in quite the way they should be used.

Most clients don’t understand the medium, its apertures or its opportunities.

At basics, most creatives even today are shot in horizontal format with 99% art directors not understanding (or appreciating) that the content will eventually be viewed and consumed in a vertical format.

Hence needs to be shot vertically.

Now, that needs reconditioning of the mind.

And adjusting to new realities.

Which, to say the least is difficult to do.

Similarly, most new social media offers combinations of video, text, pictures, blurbs, emojis, doodles, animations all possible to use concurrently in the same set of Stories.

In India we have minimal use of anything but video.

Similarly, there are features like ‘highlight’, ‘swipe-up’, and ‘UTM codes’, each designed for greater interactivity and brand-push.

Most digital designers are still unfamiliar with all these.

In essence, story-telling is passé.

In India we have a lot of learning ahead. 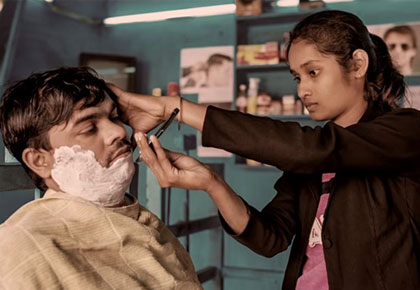