SINGAPORE (Reuters) – Asian shares rose, China’s yuan jumped and safe-harbor assets slipped on Tuesday, amid signs of goodwill between China and the United States, as the world’s two biggest economies prepared to sign a truce in their bitter trade war. 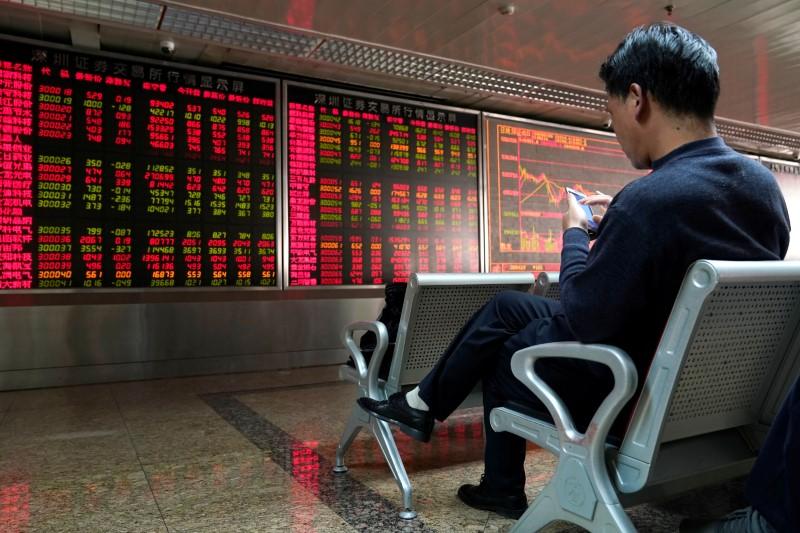 The U.S. Treasury Department on Monday said China should no longer be designated a currency manipulator – a label it applied as the yuan dropped in August.

Beijing, meanwhile, allowed the tightly managed currency to climb to its highest point since July, after fixing the yuan’s trading-band midpoint at its firmest in more than five months.

China has also pledged to buy an additional almost $80 billion of U.S. manufactured goods over the next two years, plus more than $50 billion extra in energy supplies, according to a source briefed on a trade deal.

By afternoon the yuan was 0.3% firmer at 6.8740 per dollar, world stocks sat at a record high and the Japanese yen languished at an almost eight-month low.

Futures pointed to a positive start to Europe’s trading day and for Wall Street to hold on to Monday’s record highs.

The moves come as a Chinese delegation arrived in Washington ahead of Wednesday’s signing of the Phase 1 trade agreement, seen as calming a dispute that has upended the world economy.

“There have been a number of false starts,” said Vishnu Varathan, head of economics at Mizuho Bank in Singapore.

“The fact that this is really coming to the moment when the rubber hits the road is the most tangible evidence of traction in starting to resolve issues, that’s what’s driving optimism.”

Japan’s Nikkei added 0.7% to hit its highest in a month. Australian shares rose by the same margin to close at a record.

Still, some said stocks could be exposed should the signing process offer any surprises on the downside.

“It’s buy the rumor, sell the fact … Even a delay could see an extremely negative reaction,” he said.

“We’re going to make it public on Wednesday before the signing,” he said.

In tandem with the rally, safe-harbor assets slid lower on Tuesday. Gold extended Monday’s fall to trade 0.7% weaker at $1538.02 per ounce, its lowest in two weeks.

In currency markets, the yen weakened past the 110 yen-per-dollar mark while the yuan’s strength helped lift trade-exposed currencies across Asia.

Besides the trade deal, investors are also looking to U.S. inflation data due at 1330 GMT – with consensus expectations for it to hold steady at 0.2% in December – and the beginning of the fourth-quarter U.S. company results season.