Dividend-stock strategies have long been popular because of the correlation between steady increases of payouts and investment growth. But the low-and-declining interest-rate environment is setting the stage for attractive returns, especially for dividend stocks with value characteristics, according to John Buckingham, the editor of The Prudent Speculator.

Buckingham did a special screen of stocks held within Prudent Speculator portfolios to narrow the group to 25 that meet additional criteria, as listed below. He also provided three- to five-year price targets for the group. That is in contrast to the 12-month targets and ratings used by most Wall Street analysts.

The Prudent Speculator is published by AFAM Capital, a division of Kovitz Investment Group of Chicago. AFAM Capital merged with Kovitz in October. AFAM manages about $700 million, mostly for private clients, while Kovitz’s total assets under management exceed $5 billion.

The Prudent Speculator has the top 30-year performance ranking among newsletters tracked by the Hulbert Financial Digest, with an average annualized return of 13.15% through July 30, compared with an average return of 9.66% for the S&P 500 Index SPX, +0.82% (including reinvested dividends), according to FactSet.

In an interview on Aug. 21, Buckingham said investors may have overreacted to the barrage of alarming reports saying the temporary inversion of the two-year and 10-year Treasury yield curve last week. Those comments are below.

Here’s the list of 25 dividend stocks, in alphabetical order, screened from the 120 stocks held within Prudent Speculator portfolios:

The Prudent Speculator holds 120 stocks, selected using AMAT Capital’s proprietary value methodology from a universe of about 2,700 stocks, including the 2,500 in the Russell 3000 RUA, +0.83% that have sufficient liquidity to hold trading costs down, and another 200 American depositary receipts (ADRs) of non-U.S. companies.

Buckingham screened the stocks among those in Prudent Speculator portfolios that have dividend yields above the yields on 30-year U.S. Treasury bonds TMUBMUSD30Y, -0.56% using these criteria:

• Forward price-to-earnings ratio less than two-thirds of the current ratio of 17.7 for the S&P 500.

• Negative total return over the past 12 months.

• Pass additional proprietary “quality” screening to ensure all of the following:

Looking at the dividend-stock list, there are four with dividend yields higher than 5%, with nine higher than 4% and 17 higher than 3.5%. The price-to-earnings ratios are low. In comparison, the S&P 500’s trailing P/E is 18.5, and the forward P/E is 16.5, based on weighted aggregate consensus earnings estimates for the next 12 months among analysts polled by FactSet.

The yield on 30-year Treasury paper is slightly lower than the weighted aggregate dividend yield for the S&P 500 Index, which is 2.01% according to FactSet. Consider that for a moment: Treasury yields may slide even further if the Federal Reserve continues to decrease the target range for the federal funds rate and the European Central Bank makes even more aggressive moves to prop up eurozone economies. Meanwhile, if you look to stocks for dividend income, you not only have competitive yields, you are also likely to see dividends increase over the years, with the added gravy of long-term growth potential.

Back in May 2017, Buckingham said millennials were crazy not to be 100% invested in stocks. He may be even more enthusiastic about the stock market now: “Low interest rates are extraordinarily supportive of equity prices. So I love it,” he said.

When discussing stock valuations, Buckingham said it is very important to consider the interest-rate environment. The current forward P/E ratio of 16.5 for the S&P 500 compares to a ratio of 14.3 on Aug. 21, 2007. Comparisons of other valuations, including Robert Shiller’s CAPE ratio, may also appear alarming. But 12 years ago the federal funds rate was 5.25%. Many investors were perfectly satisfied with that level of risk-free return.

Buckingham said investors (and, of course, the financial media) overreacted to the temporary inversion of yields for two-year and 10-year U.S. Treasury notes.

“The 2/10 inversion has not been the biggest predictor of recession. The three-month and 10-year, which have been inverted since March, have been a better predictor,” he said.

Buckingham provided two charts showing how well the stock market has performed after the past eight yield inversions, before 2019:

Here’s how the S&P 500 has performed over various periods following an inversion of the three-month and 10-year yields: 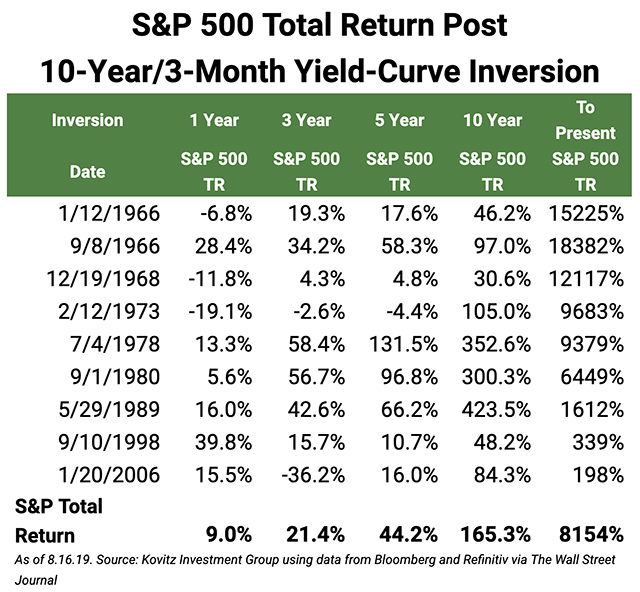 Here’s how the index has performed following the past eight inversions of the two-year and 10-year Treasury yields: 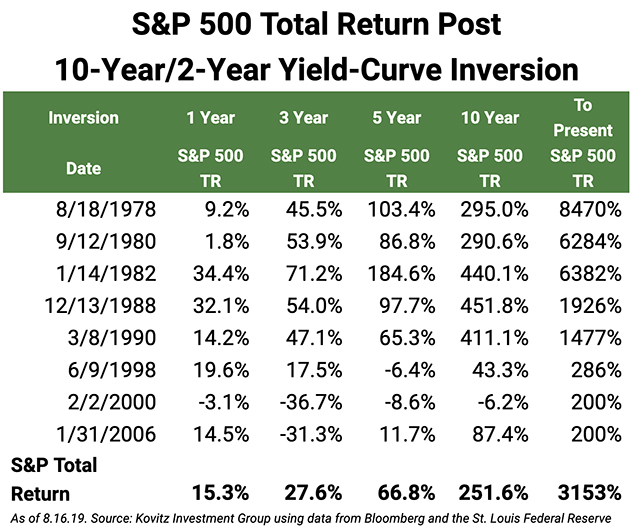 For the two-year/10-year inversion, the market was higher 12 months later in all cases but one.

When asked if he was worried about the world already being awash with cash, with negative yields on so many trillions of dollars worth of European government bonds and interest rates heading lower in the U.S., even when these economies aren’t in recession, Buckingham looked on the bright side.

”The world does not care about the federal budget deficit and sees the U.S. as a safe haven. And the cost of debt has gone down. This is why Uncle Sam should issue 50- to 100-year debt,” he said.

No matter how alarming central banks’ policies may be, or how frightening the media headlines can be, as writers wonder when inflation will cause a major policy reversal or lament yield-curve inversions, “everything has been positive for stocks,” Buckingham said.