China is slipping back into deflation. Factory gate prices rolled over in the spring and have been falling in absolute terms for the last three months. Annual core inflation has dropped to 0.6 per cent.

The workshop of the world will again be exporting goods disinflation to Europe and America within months, undercutting Western industries on a large scale. This is likely to deepen the industrial and manufacturing downturn in the West and has powerful implications for interest rates and the trajectory of inflation. The Bank of England may be vindicated for refusing to join other central banks heading for monetary overkill.

All circumstances are aligned for another long wave of cheap imports from China and East Asia. The supply chain disruptions following COVID have largely dissipated, and oceanic shipping costs have returned to levels that restore the commercial arbitrage advantage to the Far East. 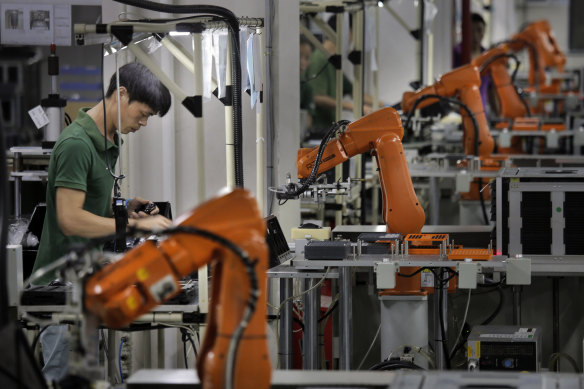 The workshop of the world will again be exporting cheap goods to Western countries within months.Credit:AP

Consultants Drewry say container freight rates from Shanghai to Los Angeles have dropped to $US2,400 ($3,690) from $US11,000 ($16,912) since February. Chinese exports fell last month as sales of ventilators, masks and COVID kit faded from the picture, but volumes remain eye-watering.

China’s trade surplus has been running at more than 5 per cent of GDP this year and is approaching $US1 trillion, more than double the structural level a decade ago when the Chinese economy was that much smaller but still large enough to suppress global inflation.

Furthermore, the South Korean won and the Japanese yen have fallen to multi-decade lows in trade-weighted terms. The effects on east Asian export competitiveness will feed through with a lag. Powerful disinflationary shock waves will hit next year.

The imponderable is Vladimir Putin’s war, but ultimately energy supply shocks are not fundamentally inflationary.

They are a change in relative prices, with deflationary effects for the rest of the economy unless accommodated by monetary stimulus.

Xi Jinping’s China is in an economic trap with no easy way out. Debt saturation has passed the point of diminishing returns and the growth model built on construction and heavy industry is beyond exhaustion. “They know they can’t keep putting their foot on the credit accelerator and wasting money on useless infrastructure,” said George Magnus from Oxford University’s China Centre.

Youth unemployment has doubled to 20 per cent over the last four years and this is a red flag for the Communist Party, still haunted by the student defiance of Tiananmen Square in 1989. Political stability depends on finding a way to draw 11 million graduates each year safely into the Leninist bourgeoisie.

The path of least resistance is to export China’s unemployment to the rest of the world with a beggar-thy-neighbour trade strategy, boosting exports through a stealth devaluation of the yuan or covert subsidies. China’s tightly controlled currency basket has already fallen 7 per cent since March.

We do not know what Xi has in mind. “The whole economic elite is being replaced from top to bottom,” said Magnus. What we do know is that the outgoing head of the central bank, Yi Gang, was a determined defender of a stable exchange rate against other factions in favour of rescuing exporters.

Since Xi refuses to modify his zero-COVID strategy, there are few tools left to engineer an economic recovery. There are even fewer now that Washington is going for the jugular, choking access to advanced semiconductor chips to thwart China’s bid for hi-tech supremacy.

The economic trade-off from property bubbles has turned negative. Price-to-income ratios have reached socially destructive levels in the great cities of the eastern seaboard, topping 46 in Beijing and 47 in Shanghai. This is delaying the formation of families. The fertility rate has dropped to 0.7 in Shanghai. That is what a demographic death spiral looks like.

Harvard professor Ken Rogoff said property makes up 23 per cent of Chinese production in different ways, and 26 per cent of final demand. This is three times the intensity of the US sub-prime bubble.

“If income growth stalls, China’s residential and commercial real-estate prices could collapse like a house of cards, taking down the banks and the local governments,” he said.

This does not imply the sort of banking crash that afflicts Western capitalism. The Communist Party retains control of the banking system and can therefore almost always prevent a disorderly collapse. But it cannot prevent stagnation.

‘The recession is going to be so deep that deflation will be a big theme again, and central banks will soon be slashing rates.’

Albert Edwards, from Société Générale, said the world will not revisit the ice age of the last decade when interest rates were pinned to the floor and debt was trading at negative yields.

“The recession is going to be so deep that deflation will be a big theme again, and central banks will soon be slashing rates and resuming QE [quantitative easing]. There is going to be a huge bond rally,” he said.

Markets have so far interpreted the Fed’s “slow and stretch” decision last week as a hawkish move. I view it as dovish. The Fed has got off the hamster wheel of jumbo 75-percentage-point rate rises at every meeting and opened the door to a “pivot”.

There are lag effects, but all key measures of the money supply have been flashing red for long enough to smother the economy in 2023. A tsunami of cut-price imports from Asia will clinch the argument.

The Bank of England’s Andrew Bailey was right to rebuke markets last week for betting on implausible levels of inflation next year and for pricing in a Bank Rate well above 5 per cent – a tightening shock that would set off a housing crash, turn the coming downturn into a full-blown depression and amount to a criminal policy error.

It was a brave decision to break ranks with the Fed and other central banks in the current febrile mood. It implies a temporary fall in the British pound that will inevitably be misunderstood.

But a year from now, the Bank of England may look like the one major central bank that refused to lose its head when all around were losing theirs.