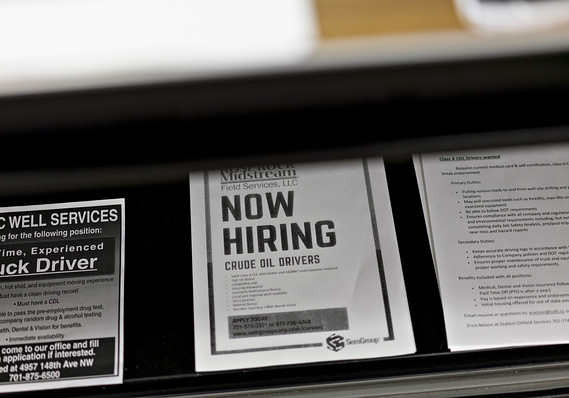 The numbers: Americans quit their jobs in May at the fastest rate since 2001, showing that workers feel so good about the economy they are willing to leave one company for another.

The percentage of people in the private sector who left their jobs by choice rose to 2.7% from 2.5%, the government said Tuesday. The so-called quite rate among all workers edged up to 2.4% from 2.3%. Both hit the highest levels since 2001. 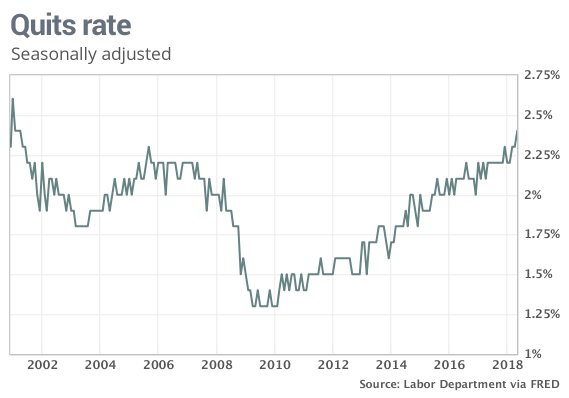 Most workers who leave jobs voluntarily end up getting better pay or benefits elsewhere. More people are willing to make the switch when the economy is booming.

Job openings, meanwhile, fell to 6.64 million in May from a record 6.84 million as companies filled more open positions.

About 5.46 million people lost their jobs in May, the Labor Department reported Tuesday.

Most the decline in job openings was concentrated in the highly populated Northeast. Opening for information-services such as media and public relations fell by 60,000. Arts and entertainment-related job openings also declined.

Big picture: The economy is surging. Companies are hiring rapidly to keep up with demand for their goods and services and soon the unemployment rate could fall to levels not seen since the 1960s.

As the rising quit rate shows, more workers are striking out for better jobs or better-paying jobs, confident they’ll succeed. If more workers do that, it could force companies to raise wages faster to retain their best employees or to attract new ones.

Read: Harley-Davidson isn’t riding off to Europe simply because of the Trump tariffs

While better pay is great for workers, it would also set off alarm bells at the Federal Reserve. Senior officials are watching closely to see if higher wages spur inflation, an outcome that would force the central bank to raise interest rates more aggressively.

Market reaction: The Dow Jones Industrial Average DJIA, +0.64% and the S&P 500 SPX, +0.36% rose in Monday trades to extend a recent rally. Both indexes have receded from record highs set earlier in the year, however, because of the threat of a potential trade war.

The 10-year Treasury yield TMUBMUSD10Y, +0.03% was little changed at 2.86%. After reaching 3.1% last month, the yield has also fallen in response to growing trade tensions.