Do cash machines ever make mistakes or “go rogue”? A retired GP’s wife says she feels as if she has been “mugged” by an ATM after it left her £130 out of pocket. She had attempted to withdraw £150, but says she received only two £10 notes in her hand.

Val Davies says she has been battling for weeks to get the matter sorted out, but – as is so often the case with this type of dispute – she was told an investigation had shown there was nothing wrong with the ATM in question. Needless to say, £150 was debited from her bank account.

“In effect, they are calling my husband and myself liars,” says Davies, who intends to take her complaint to the Financial Ombudsman Service.

She is the latest in a line of people to claim they have been short-changed or defrauded by an ATM. Six months ago, Guardian Money featured Nationwide customer Steve McQueen, who attempted to withdraw £300 but got an error message and no cash – only to later discover the money had been debited from his account.

We have featured other cases, too, and they pop up elsewhere. Often the complaint is that the ATM failed to dispense any of the money the person asked for, or that their account was debited with more than they actually withdrew. Or, maybe, the individual’s bank statement listed one or more withdrawals apparently made when they were in bed or in another part of the country – dubbed “phantom withdrawals”.

The banks almost always say there is no error with the ATM. But with banks’ IT systems seemingly having meltdowns on a regular basis, and fraudsters often targeting ATMs, is the technology really infallible?

Both the Davies and McQueen cases involved a Santander cash machine. In April 2016, Lancashire police tweeted “security at Santander ATMs in Lancs has been compromised. Advice is not to use them”, so there clearly are sometimes problems.

On 11 August, Davies attempted to withdraw £150 from an ATM inside the Santander branch in the market town of Stokesley, North Yorkshire. She used her NatWest debit card (the town’s NatWest branch had shut a few weeks earlier), but says the machine dispensed just two £10 notes. She walked straight over to a member of staff to report the matter, but was told that NatWest would have to deal with it.

Less than an hour later, Davies was on the phone to NatWest, which advised her to wait 48 hours and, if the money was not returned to her account, to phone again. She did, and was advised to wait a further 48 hours. Four days later, she phoned again and was told that it could be up to 14 days before her money was returned. When she called two weeks later, she was then told she would have to wait a little longer. 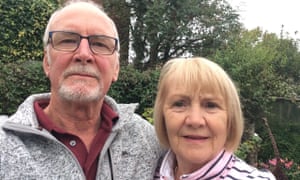 On 17 September, she says the bank’s complaints department accepted that the way her problem had been handled was inadequate, and she was offered £30 as compensation for the time spent on the phone. Then, on 25 September, she received a letter from NatWest stating that “having conducted a full investigation it was found that there was no error with the relevant cash machine and that we are unable to request a refund to your account”.

“I feel I have been mugged by the ATM,” Davies, 72, told the bank in a letter. “My husband, who was by my side during the failed transaction, is a well-respected retired local GP. Why anyone would think it was in our interests to try to defraud NatWest of £130 is a mystery.”

Her husband John, 73, says: “It’s very much the principle … it just seemed strange they are not prepared to accept our word for it. I’d have thought that, at the end of the day, the amounts wouldn’t have tallied.” He adds that if the bank had CCTV footage, it would show them reporting the matter to a bank teller.

Unfortunately for those who encounter this type of problem, it appears to be extraordinarily difficult to prove that your version of events is the correct one.

McQueen, a Nationwide customer for more than 30 years, used his debit card at a Santander ATM in Liverpool in February. He says he entered his pin but, instead of producing his cash and receipt, the machine displayed a transaction error and nothing came out. Thinking the transaction had failed, he took £200 out of a Lloyds ATM along the street. But both amounts were later debited from his account.

Santander said a thorough check of the ATM had shown no discrepancies. McQueen took his case to the financial ombudsman, which rejected his complaint. He then requested a final decision by the ombudsman, who upheld the initial decision. “I couldn’t prove I didn’t take the cash,” says McQueen, who used to work in IT. He says his best guess is that a criminal fitted a device that stopped the machine dispensing cash.

Things can be complicated by the fact that – as in these two cases – the complaint will often involve a transaction made at a cash machine owned by a different bank from the one where the person holds their account.

The ombudsman service told us that it “occasionally” receives complaints of this nature. It says that in some cases the customer does not recognise the transaction, while with others, people say they have tried to withdraw cash but the money was not dispensed.

It is fair to say that in the past the ombudsman service has rejected many complaints about phantom withdrawals.

Commenting on Davies’s case, Santander says: “We have reviewed records from the ATM … this included reviewing error messages displayed, and reconciling the amount of cash stored against what should be in there, based on the transactions that have taken place. Unfortunately, none of the information we have indicates an error with the cash machine … As this account is not with us, we are unable to offer a full review of her account, and would encourage the customer to speak to her bank if she remains unhappy.”

NatWest adds: “We respect the investigation carried out by Santander, who found no evidence to support this claim. We appreciate that this will be a disappointing outcome for our customer.”