Trump spars with California governor over $77B bullet train project

President Trump and Gavin Newsom are sparring over the state’s scaling back its $77B bullet train.

The high-speed bullet train that is set to be built between Los Angeles and San Francisco is going to cost even more than the Golden State originally anticipated.

The California High-Speed Rail Authority this week pegged the cost of completing the project at $80.3 billion in its draft 2020 business plan – $1.3 billion more than previously expected.

The Authority mainly attributes the price hike to a delay in the projected completion of a line between Silicon Valley and the Central Valley, by about 1.5 years. It also names inflation and more accurate estimates as reasons for the adjustment. 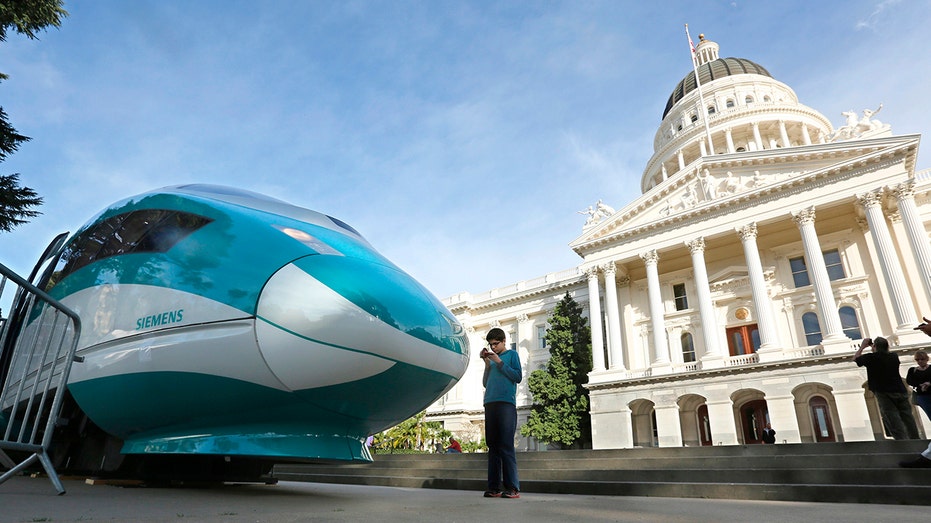 A full-scale mock-up of a high-speed train is displayed at the Capitol in Sacramento, California, in 2015. (AP Photo/Rich Pedroncelli, File)

With the funding currently available, the Authority will move forward with a line from Merced to Bakersfield.

The controversial project has a deadline of 2022 for finishing the tracks for the first section, which it says is on schedule.

Lawmakers in the state have been putting pressure on the Authority to shift billions of dollars from the Central Valley to rail projects in other parts of the state, as reported by the Los Angeles Times. Kelly, however, has pushed back on those proposals.

"In 2020, there will be 350 miles of electrified high-speed rail in development," Kelly said in the draft proposal. "In the next 18 to 24 months, we will work to environmentally clear the full Phase 1 system between San Francisco and Los Angeles/Anaheim. This transformation is well underway in California. Now is not the time to turn back."

CALIFORNIA'S $77 BILLION BULLET TRAIN WILL BE ONE OF THE STATE'S GREAT EMBARRASSMENTS: LARRY ELLISON

Meanwhile, the project has been mired with delays and other cost-related challenges. In May, the Federal Rail Authority announced it would end an agreement with the Authority, withholding nearly $1 billion in federal funds after the project "failed to make reasonable progress." The state then sued the Trump administration in return.

Trump has been highly critical of the plan, claiming "many billions of dollars" had been wasted on it. The project is among the most expensive infrastructure projects in the U.S.

According to the draft plan, testing of electrified trains will begin in 2025, with the goal of putting trains in service by 2029-2029.

So far, the Authority has dispatched more than 3,500 construction workers to work on the project – and has 36 active or completed construction sites.

The Rail Authority estimates that by 2040, the system will carry 40 million riders per year, generating $4.5 billion in revenue.

Oracle co-founder Larry Ellison previously said the initiative could become one of the state's "great embarrassments" during an interview with FOX Business. In his opinion, in the future people are going to be taking autonomous electric cars from Los Angeles to San Francisco "at a tiny fraction of the cost," affording them the leisure to leave whenever they please.