Home » Economy » Charts Suggest That Financials Sector Will Be in Focus

The financials sector has struggled to rebound from the March lows, unlike most others in the broader North American markets. However, based on the chart patterns discussed below, it appears as though the financials sector is now capturing the attention of active traders, and prices could be poised to head higher. As we will note in the examples below, price action over the past few trading sessions has been able to move beyond key levels of resistance, which is now indicating that the bulls are in control of the longer-term trend.

Most active traders who are interested in niche sectors such as financials often turn to exchange-traded products such as the Financial Select Sector SPDR Fund (XLF). As you can see from the chart below, the price of the fund has recently moved above the resistance of the 200-day moving average, which has previously shown to be a strong barrier to moves higher.

The recent increased amount of buying interesting also suggests that the 50-day moving average will soon rise above the 200-day moving average, which could act as a catalyst to a continued move higher. Should the 50-day moving average be able to close above $24.63, traders would likely use this as the starting position of a prolonged uptrend and use the newly formed levels of support as guides for determining the placement of stop-loss orders in case of a sudden shit in market sentiment. 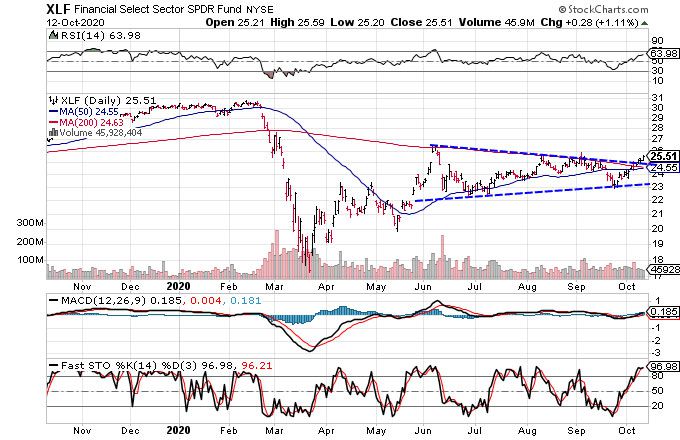 Exchange-traded funds (ETFs) provide lower average costs since it would be expensive for an investor to buy all the stocks held in an ETF portfolio individually. Investors need to execute only one transaction to buy and one transaction to sell, which leads to fewer broker commissions since there are only a few trades being done by investors.

Warren Buffett is one of the most closely followed investors in the world, and so is Berkshire Hathaway Inc. (BRK.B), which as you'll see below looks like it could be in the early stages of a major move higher. Looking at the chart, you will notice that the move in the latter part of summer was strong enough to push the price beyond the resistance of the 200-day moving average. The successful bounce from the psychological $200 mark in August was a clear indication that the bulls were back in control of the momentum.

In a similar fashion, many traders are now looking at the consolidation near the 50-day moving average to suggest that bullish traders are readying to push the price higher again. From a risk-management perspective, traders will most likely maintain a bullish outlook on the stock until the price moves back below the 200-day moving average, which would also likely coincide with a shift in underlying fundamentals. 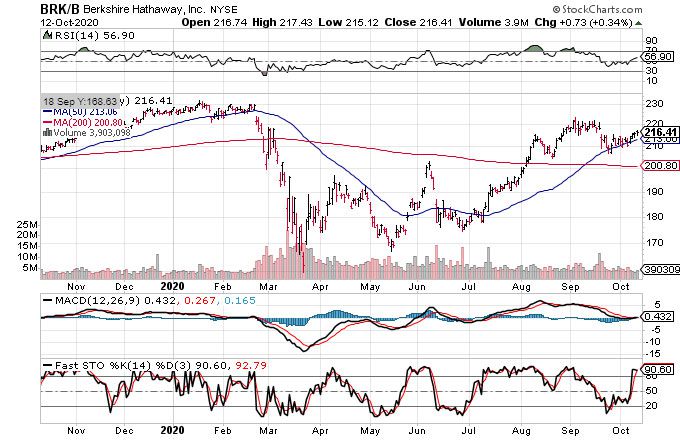 Another top holding of the XLF ETF that could capture the attention of active traders over the weeks ahead is Blackrock, Inc. (BLK). As you can see below, the price has slowed trended higher over the summer and was successfully able to remain above the 200-day moving average when tested back in September.

The bounce from the 200-day moving average is a technical indication that the bulls are in control of the momentum, and many are now watching for several consecutive closes above $615 to trigger the next leg of the uptrend. Stop-loss orders will most likely be placed below $573.86 or $520.19, depending on risk tolerance and investment horizon. 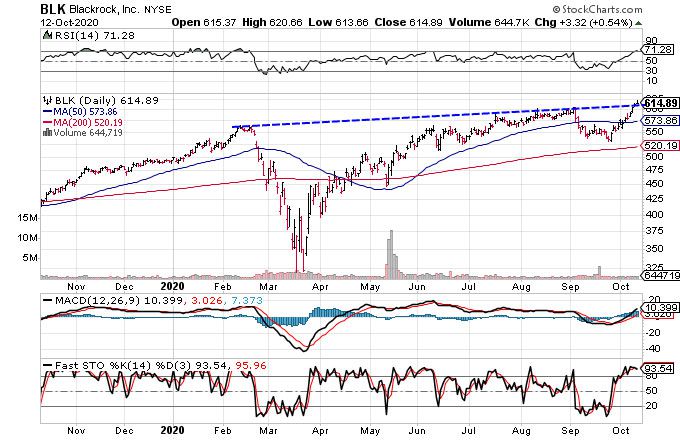 The financials sector has lagged others in the market since notching swing lows back in March. However, recent price action and nearby support levels suggest that the financials sector is now in the control of the bulls and that it could be well positioned heading into the final months of 2020.

At the time of writing, Casey Murphy did not own a position in any of the assets mentioned.