Oil ended the past week down 4.4%, despite a brave rally on Friday that resulted in oil closing the week at just over $71 per barrel. Wednesday marked the brunt of the downward price action, with oil prices closing nearly 5% lower for the day after Libya indicated that it would resume export activities at its Eastern ports, helping allay fears over tight global supplies.

Working against the downward price pressure was news that U.S. stocks of crude oil declined by 12.633 million barrels in the week ended July 6, 2018, following a 1.245 million rise in the previous week. It is the most significant drop in crude inventories since the week ended Sept. 2, 2016. The sharp decline in the level of inventories came as a shock to oil traders and analysts who had forecast a drop of 4.489 million barrels.

Despite the appearance of strong oil demand from the larger-than-expected inventory draw, concerns about a growing trade dispute between China and the U.S. related to a 10% tariff on $200 billion worth of Chinese goods plus an end to oil supply disruptions in Libya took precedence in the market and pushed oil lower for the week.

Oil price volatility could pick up next week as supply and demand themes continue to play out in the market. For example, Russia has indicated that OPEC+ could increase oil production by more than 1.0 million barrels per day (mb/d) if required. Russia has long advocated higher oil output in a rising price environment to shore up its funding coffers. Increased production from Russia could put downward pressure on prices.

Elsewhere, U.S. Secretary of State Mike Pompeo indicated that the U.S. might consider providing waivers to countries that import Iranian oil. The U.S. has given various importers until November to comply with U.S. sanctions on Iranian oil but now seems willing to be flexible on a case-by-case basis. Supply waivers from the U.S. mean that market concerns about a sharp reduction in Iranian-supplied oil could be dismissed, for the time being, also putting downward pressure on prices.

Oil’s drop on Wednesday largely negated the bullish picture that took shape at the end of June. Out of 10 technical indicators on the daily price chart, five now signal an outright sell signal, two are neutral and three remain a buy. Moving averages are evenly split between buy and sell, with short-term indicators now pointing to a sell signal.

Last week’s adverse price action was enough to push oil into an engulfing bearish price pattern on the weekly price chart. It is a significant reversal signal and usually appears after a protracted or swift price move. This pattern is characterized by a large down candle whose price action completely engulfs the previous upward closing candle. The engulfing typically signifies that the uptrend has been hurt and that the bears may be gaining strength.

Near-term price momentum also seems to be working against oil, with the fast line of the moving average convergence divergence (MACD) indicator crossing below the slow line on the daily price chart. The cross is an early indication that the previous upward price momentum is slowing. The signal is typically confirmed when the fast line crosses the zero line on the MACD chart, indicating that momentum has shifted to the downside.

For the time being, oil found some support at the 55-day exponential moving average of $69.06 per barrel and ended the week above the psychological price level of $70. 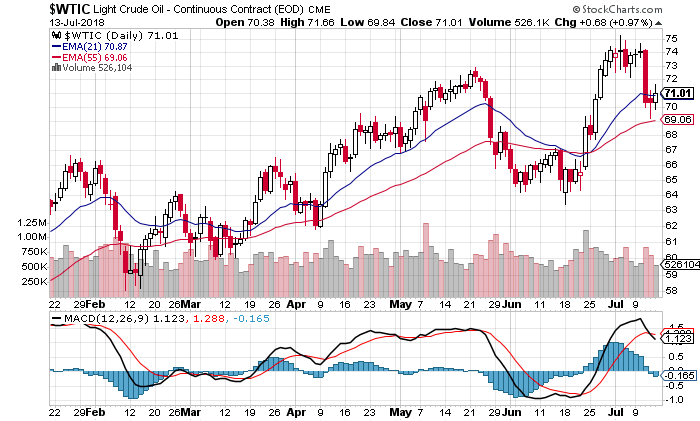 Disclaimer: Gary Ashton is an oil and gas financial consultant who writes for Investopedia. The observations he makes are his own and are not intended as investment or trading advice. Price chart courtesy StockCharts.com.