Home » Economy » Despite the photo-op, the RBA knows the economy needs more stimulus

Never fear, Reserve Bank governor Dr Philip Lowe may have stumbled on the optics of agreeing to a photo-op with Treasurer Josh Frydenberg the other week, but the Reserve’s independence remains intact and our weak economy remains in need of budgetary stimulus.

Politicians have damaged our trust so badly that they like having respected econocrats appearing beside them to bolster their credibility. But central bank governors who wish to preserve the authority of their office don’t oblige, just as Lowe’s predecessor, Glenn Stevens, declined to be used as a prop by Kevin Rudd. 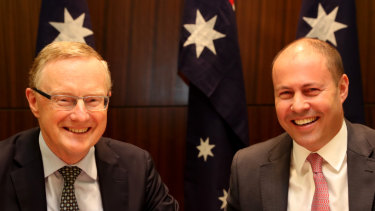 That’s the trouble, of course. There’s nothing wrong with treasurers and governors having private meetings – the more the better – but once the media are invited in the pollies will always be playing their own game, and it’s always one that puts their political standing ahead of the economy’s interests.

I suspect the message Frydenberg wanted to convey to viewers was that the economy was going fine and he had no intention of allowing fiscal stimulus to jeopardise the budget’s predicted and glorious return to surplus, which would make his name as a treasurer.

He and his Treasury officers had spent two hours explaining this to Lowe, and Lowe had accepted their arguments.

I very much doubt that’s what really happened. Nor do I except the media interpretation that, pressured by Frydenberg, Lowe went on to repudiate all he’d been saying about the economy’s weakness and why he’d needed to cut the official interest rate two months in a row.

Central bankers see it as an important part of their job to exude calm and confidence. No matter how worried they are, they take pride in never showing it.

Why then did Lowe say “I agree 100 per cent with you [Frydenberg] that the Australian economy is growing and the fundamentals are strong”?

Well, for a start, no one denies that the economy is still growing. And “the fundamentals” is such a vague concept it could be taken to mean lots of things. Presumably, Lowe doesn’t include wages among the fundamentals, because annual growth of 2.3 per cent is not what I’d call strong.

I think all he was trying to say was that he was confident we aren’t heading into recession.

But there’s a deeper point to understand: central bankers see it as an important part of their job to exude calm and confidence. No matter how worried they are, they take pride in never showing it.

They’re like a duck: moving serenely above the water, paddling furiously underneath. Lowe has spoken several times recently about the need to preserve stability and confidence.

So never hold your breath waiting for a Reserve governor, Treasury secretary or, let’s hope, treasurer  to be the first to warn that recession is possible. They’ll be the last to admit it.

Like Paul Keating on the day he tried to conceal his failure by bulldusting about “the recession we had to have”, they don’t use the R word until the figures make it impossible to deny.

And that is just as it should be. Why? Because – particularly when it’s negative, and when sentiment is wavering – what they say has too much influence over what the rest of us think and do. Too much risk of their prophesies becoming self-fulfilling.

That’s why, as a mere media commentator, it’s my job to be brutally frank, and theirs to be circumspect.

And that’s why it’s wrong to claim Lowe has suddenly changed his tune about the economy’s prospects. Those who think otherwise are like the people in the famous psych experiment who were so busy counting points in a basketball match they didn’t notice a gorilla run across the court.

In his announcement of the second rate cut – as in almost all his recent public utterances – Lowe insisted that “the central scenario for the Australian economy remains reasonable, with growth around trend expected”.

The significant change has been the Reserve’s revised judgement that the “non-accelerating-inflation rate of unemployment” has fallen from about 5 per cent to 4.5 per cent or lower. Lowe has used this as his justification for cutting interest rates.

“Today’s decision to lower the cash rate will help make further inroads into the spare capacity in the economy” and “will assist with faster progress in reducing unemployment . . .”, he said in the announcement.

It’s a lovely thought, but I fear the immediate challenge is not to get unemployment lower, but to stop it continuing to rise. And the latter risk fits better with Lowe’s repeated calls for more help from the budget – for it to be pointing in the same direction as monetary policy (interest rates), not the opposite direction, as at present.

Frydenberg’s photo-op made it clear his answer is no. Perhaps at their next two-hour meeting Lowe should explain to him how the budget’s “automatic stabilisers” work, and may well wash away his promised budget surplus.