Home » Economy » Economy seen busting out with 4% GDP, but it won’t mean squat without an encore 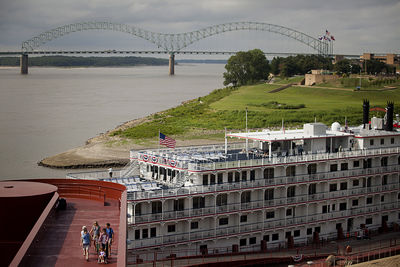 The economy hit the gas pedal in the spring and may have ripped off one of the fastest growth spurts since the U.S. exited the Great Recession nine years ago. Great news, all right, but it won’t mean much without a few encores.

Gross domestic product — the official yardstick for the economy — likely grew 4% in the second quarter, economists polled by MarketWatch say. Such an increase would double up on the 2% gain in the first three months of 2018. 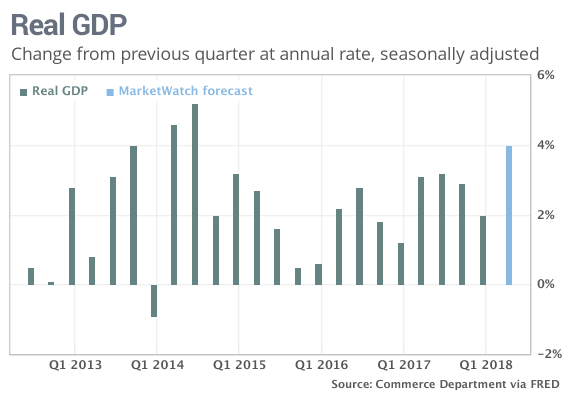 The spring bloom could be even brighter. The Atlanta Federal Reserve’s GDPNow forecast pegs growth at 4.5% and some Wall Street firms such as Macroeconomic Advisers estimate 5% GDP.

“After taking a brief pit-stop at the start of the year, the economy is firing on all cylinders again,” said economists Michael Gregory and Sal Guatieri of BMO Capital Markets.

No kidding. Consumers boosted spending, hiring surged again and businesses lifted investment and production. Exploding growth has sparked growing shortages of skilled labor and even some raw materials, a problem exacerbated by recent tariffs on foreign steel and lumber.

Now let’s be clear. No one should ever take one quarter’s worth of evidence to make a long-term prognosis on the economy’s health. Onetime events could giveth to GDP in one period and taketh from another.

The better way to look at the economy is over a broad span. If second-quarter GDP meets forecasts, the U.S. would have expanded at a 3% rate or higher in the first half of 2018. And it would put the economy on track to achieve 3% GDP for the full year.

How big a deal is that? Well, the last time the U.S. grew 3% in a calendar year was 2005. The past 12 years mark the longest stretch in the nation’s history in which GDP has failed to break the 3% mark.

Slow growth has been a problem in the U.S. for a decade now and it’s far from clear that a broader upswing is coming. The pro-business Trump administration has tried to get the economy on a faster plane with big tax cuts and deregulation, but it’s also causing lots of anxiety with brewing trade spats.

And now the president has complained publicly about the Federal Reserve raising interest rates, breaking another Washington taboo. For decades the White House has refrained from over actions that could appear to threaten the independent of the central bank.

The upheaval in the White House is forcing Wall Street to pay closer attention to the Washington.

The government will release the advanced trade figures for June a day before the GDP report on Friday, but it’s still too early to fathom the fallout from the first wave of U.S. and retaliatory tariffs.

Many U.S. firms appear to have stock up on foreign supplies or shipped more goods overseas ahead of the tariffs. Foreign buyers and sellers appear to have done likewise. That may be causing some strange doings in recent trade reports.

Another key signpost for the economy might also be less than helpful in June.

Orders for durable goods — big-ticket items designed to last at least three years — probably surged. Orders for passenger planes soared and auto makers were able to boost production after re-establishing a key supply line that was disrupted by a major fire at a parts maker.

The big number in the report is a category that tracks U.S. business investment excluding the Pentagon and commercial aviation. So-called core orders reveal whether companies are increasing investment, the magic elixir for future economic growth.

Investment surged after Trump was elected in November 2016 in anticipation of the biggest corporate tax cuts in 31 years. Yet there are growing signs the threat of a tariff war is causing firms to delay some future spending plans until they get a better sense of the outcome.