Home » Economy » Enough of the gobbledegook, here’s how super funds should report holdings

This week, a relatively small superannuation fund demonstrated to its larger rivals it is possible to show portfolio holdings in a way that is easy to understand, rather than the usual gobbledegook that members are served up.

Active Super, formerly known as Local Government Super, has an online tool called Super View, that allows funds members – and anyone else – to see, visually, where and how its funds are invested. 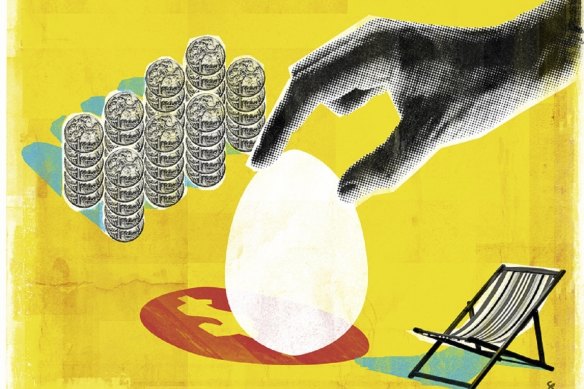 Super fund members want to easily see the industries and companies their fund invests in and not be bamboozled by reams of numbers.Credit:AFR

The tool allows anyone to see the value and weightings of Active Super’s investments across a range of asset classes. It puts the big funds’ disclosure efforts to shame.

Take the fund’s “balanced” option: users are presented with a pie chart showing each asset class, whereby hovering over each segment you are provided with information about the nature and size of the investment. For example, you can see that the fund had 24 per cent of its pooled funds invested in Australian shares as at July 31.

Clicking on the Australian share section of the pie chart takes you to another, showing that the fund’s biggest investment, at 2 per cent of the Australian equities’ exposure, is in BHP, followed by CSL at 1.5 per cent, and so on.

The disclosures by Active Super – a not-for-profit fund that manages about $13 billion in retirement savings for about 80,000 members – goes well beyond what is required by law. They also show how the fund voted at the annual general meeting of the companies in which it invests.

The numbers are updated monthly, rather than every six months, as legislation requires.

Chantal Walker, chief of member experience at Active Super, says it all comes down to transparency. “I believe members deserve to know how their money is invested,” she says.

Portfolio disclosure rules came into effect at the start of the year that compel super funds to report their holdings online.

Disclosure is important, as some fund members want their super to be invested ethically. User-friendly disclosure tells members and others if a fund is investing in a way that aligns with their interests and objectives.

Under the rules, funds must show the identity, value and weighting of most investments, although some – such as some types of directly held assets and where a fund hires external fund managers – do not have to be disclosed.

Most of the biggest and best-resourced super funds have disclosures that simply follow the letter of the law. They are often provided in spreadsheets that are downloadable from their websites.

Some also have their investments listed on their websites, contained in reams of pages. Some have a basic level of filtering, but it is difficult for consumers to easily understand.

Big funds have stated that it is too expensive to produce disclosure that is easy to navigate and user-friendly; though some assured this columnist earlier this year after the new rules came into effect that they were working on it. So far, there has been little progress.

Active Super asked some of its members what investment data they wanted, and they said they wanted to easily see the industries and companies in which the fund invests. The fund also sought the help of external companies to bring the tool to life.

If other funds do not have the expertise in-house, they should call for some external assistance, too.