Australia’s coal miners are fielding requests to ship spare cargoes of the fossil fuel to Europe and in some cases have been asked to strike longer-term supply deals as energy utilities scramble to reduce their reliance on Russia. 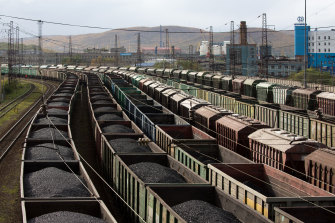 European energy suppliers are racing to find alternatives to Russian coal amid mounting sanctions against Moscow for invading Ukraine.Credit:Bloomberg

“European traders are desperately looking for tonnes, both on a spot basis as well as a term basis for the duration of the year,” Wood Mackenzie principal coal analyst Viktor Tanevski said.

“The feedback we’ve heard from Australian producers is there are inquiries coming in, decent inquiries in terms of tonnage – in some instances it might be 2 million tonnes per annum.”

Whitehaven Coal and New Hope, two of the largest Australian coal miners, confirmed they had been approached about supplying coal cargoes to Europe.

“New Hope Group’s high-quality coals are in high demand in existing markets, however, the group will examine the opportunities for supply to European markets,” a spokesman for New Hope said.

Russia supplies nearly 40 per cent of Europe’s natural gas needs, and 60 per cent of its thermal coal. While European economic sanctions applied to Russia have so far excluded energy exports, financial restrictions on Russian banks are preventing some buyers from trading with Russian suppliers, and concerns are intensifying about deteriorating rail transport availability.

The incremental increase in demand from countries seeking alternatives to Russia is adding pressure to an already-tight coal market globally. Benchmark prices for high-quality thermal coal at the Port of Newcastle have risen more than 100 per cent in the past three months and are trading around $US346 a tonne this week.

However, few Australian thermal coal miners have much spare capacity to ship additional cargoes to Europe after battling wet weather and labour shortages across New South Wales and Queensland.

There are also no major coal projects under construction in Australia to bring more volume to the market in the short term.

Federal Resources Minister Keith Pitt said he had arranged for Polish trade officials to engage with Australian coal producers to make up a shortfall in the country’s coal supply.

“Those discussions are ongoing,” he said. “While there are some logistical challenges, including high demand and pre-existing long-term contracts, our coal producers have indicated they will assist where they can.”

Although the Ukraine invasion is opening up new near-term opportunities for Australian coal, experts believe it could ultimately accelerate the transition away from carbon-intensive fossil fuels to cleaner sources of energy. Coal’s long-term future will largely be determined by how aggressively countries invest in decarbonisation and seek to meet their international commitments to help avert catastrophic climate change.

“If we see a faster energy transition, that might offset any incremental demand offered to Australia by way of Russia out of the market,” Mr Tanevski said.