The lowest common denominator prevails again in European diplomacy. Germany cannot yet bring itself to forgo Russian fossil energy until the end of the decade, seemingly whatever Vladimir Putin does to Mariupol, Sumy, or Kyiv today.

The EU policy towards Russia fails the test of statecraft on every count. It smacks of business as usual and underestimates the intensity of public outrage across Europe.

The measures agreed so far are disruptive without reaching the necessary shock and awe threshold for the Kremlin. They do not hurt enough to precipitate a revolt by the Russian high command or an internal coup by the kleptocracy as their world collapses. Europe is repeating the cardinal fallacy of calibrated sanctions through the ages. 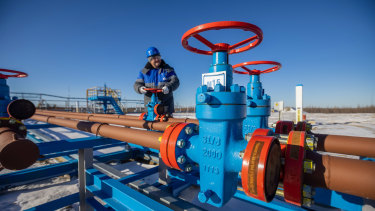 Germany’s extreme dependency on Russian gas is the result of a choice to accept a sweetheart deal by Moscow.Credit:Bloomberg

The European Commission’s sub-plan to dial down imports of Russian gas by two thirds before next winter is more to the point, but lacks the credibility of detail to make it fully authentic.

“Nobody believes they are serious. It is just a pretence that they are doing something,” said Andriy Kobolyev, former head of Ukraine’s energy nexus and now spearheading a push for comprehensive Western sanctions.

“The winter is already over and the EU risks nothing over the next seven months even if it cuts off all Russian gas today. As always, it is Germany that is procrastinating,” he said.

One can sympathise with the difficulties of the German coalition: some 54 per cent of the country’s gas supply comes from Russia, and it has no terminals of liquefied natural gas (LNG). The Anglo-Saxons are largely shielded from direct effect, though not from soaring prices.

But one would be more sympathetic had Germany not also decided this week to press ahead with the closure of three well-functioning nuclear reactors later this year, making matters even worse.

If Berlin is not willing to pick this low-hanging fruit – and even better, to push for an emergency revival of three other reactors closed in January – one has to doubt whether it is willing to confront the Putin regime in earnest. “We have the feeling that Germany is just waiting for Ukraine to go down,” said Kobolyev.

Let us not forget that Germany’s extreme dependency on Russian gas is the result of a choice, unlike the legacy dependency of the former captive states of eastern and central Europe. Berlin chose to increase the Russian share of its primary energy after the annexation of Crime.

It did so because it was offered a sweetheart deal by Moscow. It tied the ribbons with the Nord Stream 2 pipeline, a mercantilist arrangement dressed up by the Social Democrats as high-minded Ostpolitik.

‘We are financing the very war that we are otherwise denouncing. We must put a stop to these deliveries.’

Berlin brushed aside warnings from critics within Germany, and ignored pleas from Poland and the Baltic states that it was undermining European energy solidarity. Western policy should not now be bent to Berlin’s particular sensitivities.

Former French president François Hollande, who learned his lesson negotiating with Putin over the Minsk accords, has called for a total and immediate embargo of Russian gas, coal, and above all crude, the Kremlin’s primary source of revenue. “We are financing the very war that we are otherwise denouncing. We must put a stop to these deliveries,” he said.

Kobolyev said the EU should at least cut off sales of Russian LNG, which hits the Yamal project, with ties to the Kremlin’s siloviki mafia [the strong men around Putin]. Better yet, it should insist that revenues from Gazprom’s pipeline gas go into an Iran-style escrow account that will be released only once Russia calls off the invasion, with sums deducted to pay for the reconstruction of Ukraine.

“They cannot stop their gas flows without severely damaging their own wells. And would take months to shut them down in any case. Putin’s threat to cut off Nord Stream 1 is just bluff,” he said.

The EU imports 155 billion cubic metres (bcm) of Russian gas. It aims to reduce this by over 100bcm before the end of December, a task described by commission vice-president Frans Timmermans as “hard, bloody hard”.

It is also bloody vague. “They have just picked a round number, but they don’t explain how they are going to do it. They are relying on the same magic maths we’ve seen for the last 15 years in EU energy policy,” said Thierry Bros, former head of energy security at France’s economy ministry.

The EU plan is to find 14bcm by lowering home heating by 1 degree Celsius, 20bcm from extra wind and solar beyond what is already in the works – with much pious talk about faster planning that leaves you rolling your eyes if you have ever dealt with French or Italian bureaucracy.

There will be 10bcm through other pipelines from places such as Algeria or Azerbaijan, and 50bcm from global LNG from US, Qatar, or Africa, with a few heat pumps thrown in. All storage sites will be required to raise depleted gas inventories to 90 per cent of capacity by the end of October, with 100 per cent rebates for utilities to cover the extra cost.

The Bruegel think tank in Brussels has crafted a credible plan that cuts off all Russian gas. It argues that there is enough spare LNG capacity through the low-season months to replenish stocks before the winter frosts, and extra capacity currently under construction could plug part of the gap. The LNG fleet gained 50 new tankers last year, and there will be 30 more this year. “LNG vessels do not appear to be a limiting factor,” it said.

But buying in an extremely tight market would cost an estimated €370 billion ($552 billion), compared to €60 billion in the last normal year before the pandemic. It would also require slashing demand by 10 per cent to 15 per cent.

Rationing on this scale is precisely what the EU is not yet prepared to face, although the experience of Japan after Fukushima shows that it can be done in extremis.

Energy-intensive industries are already in trouble. The commission says half of the bloc’s aluminium and zinc smelters have temporarily closed or are operating at restricted volumes. The EU has shut in 30 per cent of its primary aluminium capacity.

“There is going to be a massive economic downturn, but we are in a war situation and the only choice is to get out of Russian coal, gas, and oil completely. It is time the EU acted instead of reacting all the time,” said Bros.

Western policy is a work in rapid progress. Perhaps EU leaders rose to the occasion at a dinner on Wednesday night in the Hall of Mirrors, the same room at Versailles where Georges Clemenceau, David Lloyd George, and Woodrow Wilson grappled with intractable ethnic problems left by the collapse of four empires – and were unjustly caricatured by a bumptious John Maynard Keynes.

I reserve judgment. There has been too much self-congratulation by Brussels insiders over the “unity” of the EU’s response, as if unity rather than substance is what matters, and as if it were the EU rather than NATO that is helping to hold back 90 Russian battalion tactical groups.

Some seem more interested in using this “beneficial crisis” as a federalysing catalyst, a chance to force the pace towards EU fiscal and defence union, whether or not these architectural ambitions have any relevance to the slaughter before the world’s eyes.

The Chinese briefings after Xi Jinping’s video meeting this week with Germany’s Olaf Scholz and France’s Emmanuel Macron are revealing and unsettling. The state-controlled media said the talks showed that “Chinese and European leaders share similar stances and interests on the Ukraine situation”.

This is a remarkable claim. The evidence – rather than platitudes – is that the Chinese communist regime is supporting Vladimir Putin to the hilt.

What Beijing seems to be telling us is that the Franco-German couple signalled an unhealthy level of distance from both the US and the EU’s front-line states at a critical moment for the Western democratic alliance.

Let us be clear: European and Chinese interests in Ukraine are not remotely “similar”.