Forbes released its ninth annual “30 Under 30” list Tuesday, which features 600 young entrepreneurs who are innovating their respective industries.

“Every year we are more and more inspired by the growing number of young people who have made it their mission to change the world through innovation, entrepreneurialism, and drive, and this year’s class is no exception,” said Randall Lane, chief content officer of Forbes.

He added, “The Forbes ‘30 Under 30’ list has become the preeminent recognition for the most up-and-coming visionaries, game-changers and pioneers the world has to offer – and we can’t wait to see what they accomplish next.”

Full profiles for the honorees can be found on Forbes’ website.

The 2020 “30 Under 30” list is a diverse one, with 48 percent of the featured individuals identifying as either an immigrant or first generation.

In terms of which U.S. cities produced entrepreneurs that made the Forbes’ “30 Under 30” list, New York City was top dog with 21 percent of “honorees hailing from the Big Apple.” The tech hub of San Francisco had 17 percent in comparison, followed by Los Angeles, Boston and Chicago. 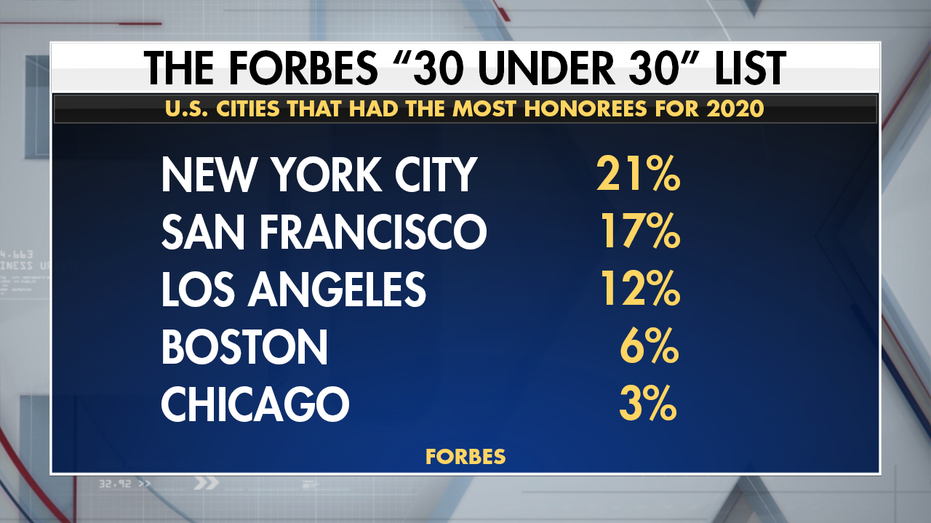 According to the publication, over 15,000 online submissions were sent in vying for the 600 available slots. Forbes collaborated with expert judges in each category to narrow down its entrepreneur list.

The Forbes “30 Under 30” alumni network has grown to include more than 5,000 individuals throughout the world in the last nine years. Honorees get to carry this title for a lifetime.