The S&P 500 is back at multimonth highs while the Nasdaq has returned to records, an uptrend that has spurred a resurgence in optimistic short-term sentiment, but hasn’t wiped out all caution.

In an environment marked by geopolitical tensions; a Federal Reserve that is becoming less accommodative, contributing to a flattening yield curve; and an earnings season that may not be strong enough to fuel further gains, expectations have fallen sharply. And the economy’s prospects may be bleaker due to what fund managers see as the biggest risk the stock market has faced in years: a global trade upheaval.

According to the July BofA Merrill Lynch survey of fund managers, the percentage of those polled who expect the global economy to be stronger a year from now is at its lowest reading since February 2016, and this reading has declined swiftly thus far this year. Currently, a net of negative 11% expect the global economy to be stronger in 12 months, down from positive 40% at the start of 2018. 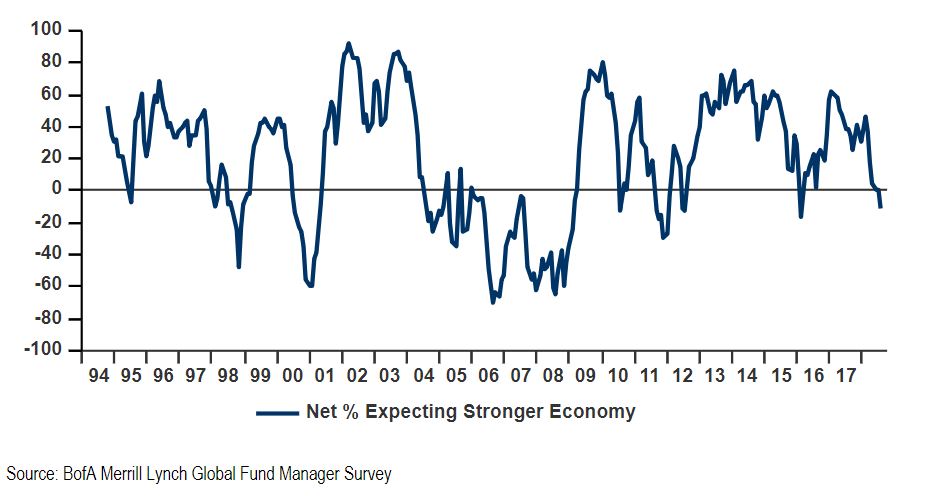 While there’s hardly an unanimous view that the bull market is in its last throes or that a recession is likely to occur soon, there seems to be a growing consensus that the economy is in the late stage of its cycle.

A primary factor behind the sentiment shift in the survey was the threat of a trade war, a factor that has dictated market activity in both directions for months. Tensions between the U.S. and its major trading partners have escalated throughout the year, with multiple tariffs announced or implemented, actions that have been met with retaliatory measures. According to the survey, 60% of those polled said that trade was the biggest tail risk facing markets; this issue had the highest investor conviction of any since the European Union debt crisis in 2012.

Such extreme bearishness could be a positive contrary indicator; BofA noted that European banks surged in the three months after that issue was cited as a major concern, and “tactically advise[d] contrarian bulls to position for overblown trade war concerns.”

The survey was the latest in a series of cautious signals. On Monday, the International Monetary Fund said that global growth rates for 2018 and 2019 were “less even, more fragile [and] under threat” than previously expected.

Separately, Minneapolis Federal Reserve President Neel Kashkari wrote a blog post discussing the prospect of an inverted yield curve, or an environment where short-term Treasury rates exceed their long-term counterparts. This is often viewed as one of the most reliable predictors of a recession.

“If the Fed continues raising rates, we risk not only inverting the yield curve, but also moving to a contractionary policy stance and putting the brakes on the economy, which the markets are indicating is at this point unnecessary,” he wrote.

On Tuesday, Federal Reserve Chairman Jerome Powell made clear the central bank plans to continue raising interest rate hikes at a pace of once every three months, at least “for now.”

In conjunction with this darker outlook, investors have been cutting their exposure to stocks, according to the BofA survey. Equity allocations fell by 14 percentage points to a net overweight reading of 19% overweight in July, their lowest level since November 2016.

This reallocation was a function of weaker views toward international stocks. Investor allocations to European equities fell by 8 percentage points to a net overweight level of 12%, the lowest since December 2016. Allocations to emerging markets tumbled by 23 percentage points in June — the largest monthly drop in two years — bringing holdings to a net underweight of 1%.

Exposure to U.S. stocks increased, on the other hand. Allocations rose by 8 percentage points to 9% overweight, the highest level since February 2017.

Particularly desired were technology stocks, a sector that has driven almost all of the S&P 500’s gains thus far in 2018. Allocation to tech rose by 10 percentage points to net 33% overweight, “making it the most favored sector this month,” according to the survey.