Home » Economy » If only we had a carbon price, we wouldn’t be trembling in our boots

If Scott Morrison fails to front for the Glasgow climate conference at the end of the month, his preference to stay home while we’re dismantling the lockdown will be only one reason. The other’s that the conference isn’t looking like it’ll be a roaring success. 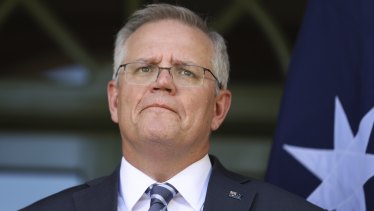 Scott Morrison has been lukewarm about attending the climate summit in Glasgow.Credit:Alex Ellinghausen

Unlike us, most of the big players have already put their revised commitments on the table. That’s the problem with Glasgow. So far, those commitments add up to much less than needed to hold the global average temperature rise to the “well under 2 degrees” agreed on at Paris in 2015, let alone the 1.5 degrees the poorer countries demand.

As many of us now realise, we wouldn’t be trembling in our boots over the enormity of getting our emissions down to net zero by 2050 – and making big strides long before then – had we not abolished after only two years the perfectly good carbon pricing scheme the Gillard government introduced in 2012.

By 2014, people had realised the carbon tax accounted for only a little of the huge increase in electricity prices we experienced, and that the Coalition’s talk of $100 legs of lamb was just a fairy story.

Of course, the carbon price would be higher by now, and we’d have had to extend it beyond electricity and gas to all other sources of emissions.

The series of studies the Grattan Institute’s Tony Wood is doing on how we can reduce emissions in other parts of the economy – transport, manufacturing, agriculture – shows that without the help of a carbon price it’s much harder going.

And it strikes me that insufficient reliance on a carbon price may explain much of the trouble the other parties to the Paris Agreement are having in making adequate progress. Indeed, it could be we won’t make it to net zero without the biggest emitters making greater use of emissions pricing.

In a recent paper, Ian Parry, of the International Monetary Fund, says more than 60 carbon tax or emissions trading schemes have been introduced at sub-national, national or multi-country levels. In recent months, China and Germany have launched major initiatives, the carbon price in the European Union has risen above €50 ($80) a tonne of carbon dioxide, and Canada announced its price would rise to the equivalent of $185 a tonne by 2030.

Even so, only about a fifth of all global emissions are covered by pricing schemes, and the global average price is only about $4 a tonne. Parry says that’s a far cry from the global price of about $US75 (more than $100) a tonne needed to reduce emissions sufficiently to keep global warming below 2 degrees.

To save face, Morrison has set his face against using the price mechanism to save the planet. But economic reality – or pressure from other, more sensible countries, or even voters – may yet change his tune.

Does $100 a tonne sound expensive? It is in the sense that the price increase built into the prices of emissions-intensive goods and services needs to be big enough to produce sufficient change in the behaviour of consumers and businesses.

But it’s cheap when you realise that the purpose of a carbon tax (or, equivalently, the proceeds from the government auctioning emissions permits to businesses who need them) is not to raise additional revenue but to change behaviour.

So the proceeds can be used to make equivalent reductions in other taxes, especially income tax. Thus people pay more for some of the goods and services they buy, but pay less income tax. People on welfare benefits have them indexed to cover their higher living costs.

As we discovered in 2012, introducing a carbon tax or emissions trading scheme (ours was the former that, after a few years, would become the latter) is a relatively simple business. You don’t tax emissions directly, but use scientific estimates of the average amount of carbon dioxide the production and use of that class of product emits.

But almost all economists recommend using a carbon price to decarbonise the economy also because they think it’s the policy instrument likely to achieve the objective with the least disruption to the economy and least loss of growth in the production of goods and services. 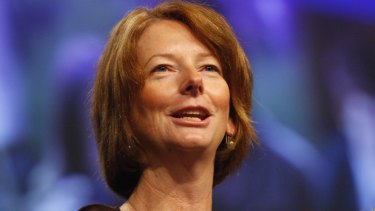 Julia Gillard’s carbon tax plan was abolished two years after it was introduced in 2012.Credit:Andrew Meares

That’s what economists really mean when they say a carbon price is the cheapest way to get to net zero. They know that sufficiently large changes in relative prices will change people’s use of fossil fuels.

Get this: a carbon tax is a tax the government actually wants people to find ways to avoid having to pay. It’s intended to discourage people from using fossil fuels. How? By using electricity, gas and petrol less wastefully. By switching to renewable energy (which is untaxed) because it’s relatively cheaper. By making sure that the next car or appliance or production machine people buy is more energy-efficient than the last. By increasing the monetary incentive for businesses to come up with less-polluting ways of doing things and inventing less-polluting machines.

To save face, Morrison has set his face against using the price mechanism to save the planet. But economic reality – or pressure from other, more sensible countries, or even voters – may yet change his tune.

One worry about putting a price on carbon is whether it would put our exporters at a disadvantage. A new and opposite worry is whether countries that have one when we don’t will protect their industries by slapping a “carbon tariff” on our exporters.

But the International Monetary Fund has come up with a solution to these worries that would also allow every country to use carbon pricing to make greater progress towards net zero. It proposes that the G20 countries (including us) phase in a uniform carbon minimum or “floor price” of $US75 a tonne of CO2 by 2030. Smart idea.

Ross Gittins is the economics editor.