Retirement savings have more than recovered from their losses during the worst of the pandemic, but rising inflation and volatile sharemarkets are putting even a small positive return for this financial year at risk.

“Growth-style” investment options, where most people still working have their retirement savings, returned an estimated 1.2 per cent between mid-last year to April 30, figures from Chant West show.

That is in stark contrast to the 18 per cent gain over the 2020-21 financial year – the strongest financial year in 24 years and the second-highest return since the start of compulsory super in 1992. 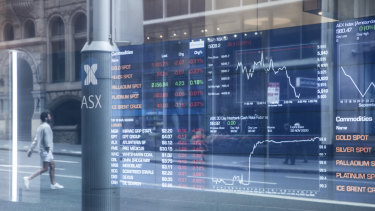 It was a dramatic turnaround from the 0.5 per cent loss recorded for the 2019-20 year, following major falls on stock markets around the world. The Australian sharemarket lost more than 30 per cent, peak-to-trough, during February and March 2020 as lockdowns and restrictions came into force.

All in all, super funds performed well during the worst of COVID-19. Since the start of 2020, just before the pandemic began, to April 30 this year the typical growth option produced a cumulative return of 12.5 per cent.

It is the performance of shares that mostly drives the returns of growth options, and the typical growth option has about 55 per cent of members’ money invested in Australian and global shares.

‘Super fund members should not allow themselves to be distracted by short-term noise.’

The Australian sharemarket is down about 7 per cent since the beginning of this year as central banks around the world start to increase interest rates to tame rising inflation. Australia’s headline inflation for the 12 months to March 31 surged to 5.1 per cent.

US inflation figures for April this week came in higher than expected by markets at an annualised rate of 8.3 per cent; though it was a little lower than for March (8.5 per cent). The US sharemarket traded lower on the news, led by technology stocks.

“With [US] inflation sitting at a 40-year high, equity markets are on edge as the US Fed moves into an aggressive monetary tightening cycle, unwinding the huge amount of monetary stimulus we’ve seen in recent times,” said Russel Chesler, head of investments and capital markets at VanEck.

“We could see shares weaken further with the risk that inflation keeps shooting higher,” Chesler said.

Growth options invest in other asset classes that help offset any losses from shares. Unlisted office, retail and industrial property and infrastructure, such as airports and toll roads, perform steadily through market cycles.

Short-term blips to performances need to be seen in context as fund members will spend 40 years-plus in the workforce, said Mano Mohankumar, senior investment research manager at Chant West.

For the three years to April 30, the average annual compound return is 6.6 per cent and over 10 years it is 8.4 per cent, Chant West figures show.

“You have to say that funds have navigated the worst of the pandemic period well, but there is a challenging period ahead,” he said. Growth options are well-diversified and there is no reason why they should not continue to produce good returns over the longer term, Mohankumar said.

“Super fund members should not allow themselves to be distracted by short-term noise,” he said.