That story about the young Alabama man whose boss gave him a car after he had to walk 20 miles to work was a heartwarming story about grit, determination and generosity.

But the story also lifted up the rock covering a festering economic and social problem that doesn’t get much attention, even in these days of heightened discussion about inequality and the lack of equal economic opportunity.

Or, like in my neighborhood starting tomorrow, the trains stop running for five weeks for repairs?

For many workers in low-paid jobs, missing work can mean losing a job. And finding a new one within an easy commute can be tough.

It’d be nice if everyone who needs a car could get a free one from the boss, like Walter Carr of Homewood, Ala., did last weekend, but that’s not the real world. In the real world, poor people are handicapped by geography. In a country where a car is almost a necessity but 10 million households have none, there are no simple answers.

Public transportation — the bus, the train, the trolley or the ferry — is the solution for some people — for about 6% of workers, mainly in large cities. But our mass-transit systems evolved during an era when the jobs were in the city and the workers were moving out to the suburbs.

But now the jobs have moved out too. Today, only a fifth of metro-area jobs are downtown. Most commuters go from one low-density suburb to another.

Most people without a car live in neighborhoods with at least some access to mass transit. The problem for them is that, too frequently, the bus won’t get them to work.

Carr, the man who got the boss’ Ford Escape SUV, lives in one suburb and works in another near Birmingham, Ala., which has one of the lowest accessibility ratings among the largest 100 metro areas. In the Birmingham metro area, the typical job is accessible by public transportation to only 14% of the workforce, according to an analysis by Adie Tomer, a fellow at the Brookings Institution’s Metropolitan Policy Program. For the typical suburban job on the outskirts of Birmingham, only 5% of the workforce could get there in 90 minutes or less by bus. 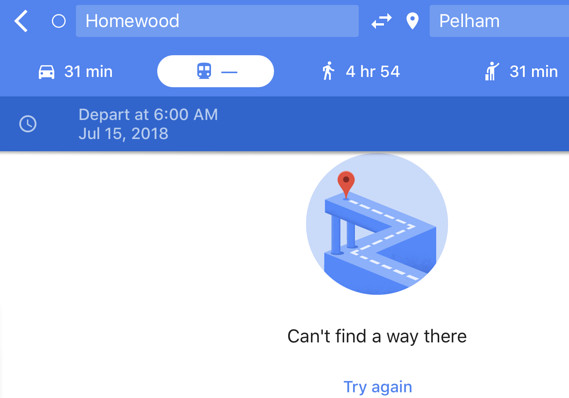 Accessibility to jobs isn’t just a problem in Birmingham and other low-density cities in the South. The New York Federal Reserve recently studied the impact of deteriorating subway performance on low- and high-income New Yorkers in neighborhoods with train service.

Not surprisingly, the New York Fed found that people with resources found ways around the inconveniences. They could afford to live closer to work, and closer to multiple train lines to get around delays. They could afford taxis or ride-sharing services on the days when trains were delayed too much. They could be late without consequences, or they could just “work from home” that day.

On the other hand, low-income workers had to build in more time into their commutes to account for the worst-case scenario, because being late or not showing up isn’t an option.

This isn’t only a problem for those poor unfortunate souls. It’s a problem for businesses, which are struggling to find qualified workers. We’ve been told it’s a “skills mismatch,” when really the problem might be getting the worker and the job in the same place at the same time. Their pool of candidates is much smaller than it would be if you could just be “beamed up” to your job, like Captain Kirk.

But that flexibility doesn’t work for every kind of business, especially those that employ low-skilled workers in retail, food service, personal services, construction, manufacturing, transportation, warehousing and agriculture.

Some efforts to move people off welfare and into work have foundered on these rocks. All the training and motivation seminars in the world won’t do any good if you can’t get from home to work cheaply and efficiently.

Lack of transportation can trap low-income Americans into a cycle of poverty. Their employment opportunities, and wages, are limited by geography. That’s why a lot of work is being done at the regional and local level to mitigate this handicap by thinking about housing, transportation and economic development policies together.

Some reformers have even suggested that it would be cost-efficient to subsidize car ownership or car-sharing for those in transition, or at the minimum allow people on welfare to keep their car without exceeding asset thresholds.

Ultimately, this problem is too big for easy answers. We can’t just have every CEO in America (or the public treasury) provide a car to every worker who needs one.

Most people who don’t have a car simply cannot afford the upkeep, gasoline, insurance, registration and inevitable tickets that car ownership brings. For the poorest 20% of Americans by income, the average spending on housing, utility bills and transportation actually exceeds their annual income, Tomer points out.

But more than that we need higher incomes for those at the very bottom. We can’t expect people to work their way up the ladder if it takes half their day and half their pay just to get to the bottom rung.