Home » Economy » One problem at a time: jobs first, inflation (much) later

It had to happen: at a time when inflation is the least of our problems, some have had to start worrying that prices could take off. Funny thing is, it’s not the usual suspects who are concerned.

As so often happens, the new concern is starting in America. But since so many people imagine globalisation means our economy is a carbon copy of America’s, don’t be surprised if some people here take up those concerns.

The new Biden administration is about to put to Congress a recovery support package of budget measures – a key election promise – worth a mind-boggling $US1.9 trillion ($2.5 trillion). 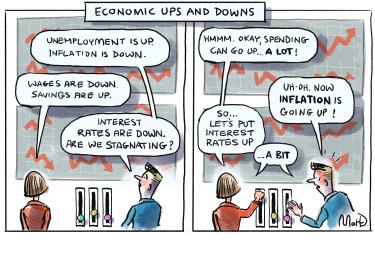 Particularly when you remember that, after the US election but before President Biden’s inauguration, Congress stopped stalling and put through another, smaller but still huge, package of spending measures, so it’s not surprising that some people are saying it’s all too much and will lead to problems with inflation.

What’s surprising is that the worries have come not from Republican-supporting and other conservative economists, but from an academic economist who’s been prominent on the Democrat side, Professor Larry Summers, of Harvard.

Summers, a former secretary of the Treasury in the Clinton administration, has been supported – on Twitter, naturally – by Professor Olivier Blanchard, of the Massachusetts Institute of Technology, a former chief economist at the International Monetary Fund. 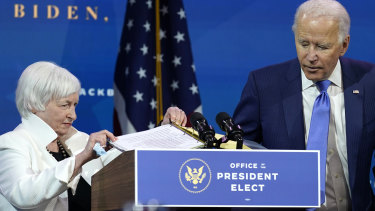 US Treasury Secretary Janet Yellen has been a big supporter of Joe Biden’s $US1.9 trillion spending package.Credit:AP

The Biden package has been vigorously defended by the new Treasury secretary and former US Federal Reserve chair Professor Janet Yellen, supported by Professor Paul Krugman, a Nobel prize-winning economist and columnist for the New York Times.

All four of these luminaries have long been advocates of vigorous use of fiscal policy (budget spending and tax cuts) whenever the economy is recessed.

As well, Summers is the leading exponent of the view that America and the other rich economies (including ours) have, at least since the global financial crisis in 2008, been caught in a low-growth trap he calls “secular stagnation”, because investment spending (on new housing, business equipment and structures, and public infrastructure) has fallen well short of the money being saved by households, businesses and governments.

This imbalance, Summers argues, explains why interest rates have fallen so close to zero. He’s long advocated that governments spend on big programs of infrastructure renewal and expansion (including on the cost of fighting climate change by moving from fossil fuels to renewables) to “absorb” much of the excess savings and, at the same time, lift the economy’s productivity.

All four of these economists would fear (as I do) that the structural problems that kept the economy stuck in a low-growth trap for years before the pandemic came along will reassert themselves once the world gets on top of the virus and we recover from the coronacession.

So why would Summers, of all people, fear that Joe Biden’s massive support package could lead to the return of something that hasn’t been a problem for several decades, rapidly rising prices of goods and services?

Because he fears the package’s spending is three times or more the size of the hole in demand that needs to be filled to get the US economy back to “full employment” – low unemployment and underemployment, and factories and offices operating at close to full capacity.

Economists believe that an economy’s “potential” rate of growth is set by the rate at which its population, workforce and physical capital investment are growing, plus its rate of improvement in productivity – the efficiency with which those “factors of production” are being combined.

For as long as an economy has idle production capacity – unemployed and underemployed workers, and offices, factories, farms and mines that aren’t flat-chat – its demand can safely grow at a rate that exceeds its potential annual rate of growth.

But once that idle production capacity – known as the “output gap” – has been eliminated and demand’s still growing faster than supply, the excess demand shows up as higher inflation.

Summers’ concern comes because the Congressional Budget Office’s estimate of the US economy’s output gap is several times less than $US1.9 trillion.

Roughly half of the package’s cost is accounted for by spending on virus testing, the vaccine and other health costs, spending to get schools open again, and income-support for victims of the coronacession, including a temporary increase in unemployment benefits.

A good reason we shouldn’t worry about inflation at a time like this is that, should it become a problem, we know exactly how to fix it: put interest rates up.

Summers has no objection to any of that. But much of the rest of the proposed spending is the cost of cash payments of $US1400 ($1800) a pop to most adults, regardless of their income. This is pure “stimulus” spending, and Summers worries that it may crowd out Biden’s plans for subsequent spending on infrastructure, to be spread over several years.

But calculations of the size of an economy’s output gap are rough and ready. Who’s to say the assumptions on which the budget office’s estimates are based are unaffected by the causes of secular stagnation, or by the unique nature of the coronacession?

And even if the spending of those cheques (much of which is more likely to be saved) did lead to price rises, this doesn’t mean we’d be straight back to the bad old days of spiralling wages and prices. (If we were, it would be a sign the era of secular stagnation had mysteriously disappeared.)

Remember, the Americans’ inflation rate (like ours) has long been below their target. Getting up to, or even a bit above, the target would be a good thing, not a bad one.

And, in any case, a good reason we shouldn’t worry about inflation at a time like this is that, should it become a problem, we know exactly how to fix it: put interest rates up. Australia’s households are so heavily indebted that, in our case, just a tiny increase would do the trick.

Ross Gittins is the economics editor