SINGAPORE – Private-sector analysts have raised their forecast for Singapore’s economic growth in 2021 for the third time this year, according to the latest quarterly survey released by the Monetary Authority of Singapore (MAS) on Wednesday (Sept 1).

They expect Singapore’s gross domestic product (GDP) to expand 6.6 per cent this year, slightly higher than the 6.5 per cent estimated in June.

The prospect of reopening borders to international travel was the main driver for optimism and was cited as an upside risk by 70 per cent of analysts surveyed, up from 44.4 per cent in the June survey.

The Republic’s effective containment of the Covid-19 outbreak and stronger-than-expected manufacturing growth amid robust global electronics demand were also cited as reasons for the increased optimism.

At the same time, a further deterioration in the Covid-19 situation and associated re-tightening of public health measures remains the most-cited downside risk to Singapore’s growth outlook, with 90 per cent of those surveyed identifying it as the biggest threat.

Respondents also flagged the downside risks from supply chain disruptions, amid a surge in Covid-19 cases due to the more infectious Delta variant, which could constrain manufacturing and trade activity.

And while the economists lifted their full-year growth projections for the manufacturing as well as finance and insurance sectors, they lowered their forecasts for the construction as well as accommodation and food services sectors that have been dogged by Covid-19 restrictions.

The economists’ raised forecast for the Singapore economy falls within the Government’s own upgraded projection. Last month, the Ministry of Trade and Industry lifted its 2021 growth forecast for Singapore to between 6 per cent and 7 per cent, from 4 per cent to 6 per cent previously.

CIMB Private Banking economist Song Seng Wun noted that the downside risks for supply disruptions have been factored into the forecasts for Singapore’s goods-producing sectors.

“If not for the supply disruptions, the forecasts for construction – which is affected by (manpower shortages due to Covid-19 infections in neighbouring countries) – and manufacturing would have been even higher,” he said.

OCBC Bank head of treasury research and strategy Selena Ling pointed out that the global supply chain disruptions do need “a fair bit of watching” as they may drive up costs beyond the short term.

“So far, manufacturing, especially electronics, have been one key pillar of growth. Barring a strong uptick in construction and domestic-oriented services from here, any electronics weakness, particularly during the run-up to the peak Christmas order season, would pose some downside risk,” she said.

The MAS survey report noted that economic growth in the second quarter came in at 14.7 per cent year on year, slightly below the expected 15 per cent.

Survey respondents are tipping Singapore’s economy to grow 7 per cent year on year in the third quarter.

The drop from the second quarter’s 14.7 per cent growth is largely due to the base effects a year ago with Singapore suffering its deepest economic slump in the second quarter of 2020 amid circuit breaker measures.

For the whole of this year, Singapore’s manufacturing sector is now expected to expand 11.4 per cent, higher than the 8.3 per cent growth tipped in June.

Analysts’ median forecast for non-oil domestic exports for the year was also raised to 9 per cent, up from 7.5 per cent tipped in June.

In the latest MAS survey, the economists’ predictions for overall unemployment rate remained the same as in June at 2.7 per cent.

Inflation, measured by the consumer price index for all items, is expected to come in at 1.7 per cent for the year, higher than the median forecast of 1.4 per cent in June.

The median forecast for core inflation, which excludes volatile accommodation and private transport costs, was lowered to 0.7 per cent from 0.8 per cent previously.

Mr Song said that rising cost pressures are due to factors such as higher energy costs and businesses passing on increased costs to consumers.

Respondents also cited a tightening in global financial conditions, an escalation in the Covid-19 pandemic and regulatory developments in China spilling over to regional markets as the top three factors which could potentially weigh on financial market and lending conditions in Singapore.

Last week, US Federal Reserve chairman Jerome Powell indicated that the US central bank is likely to begin pulling back on its massive bond purchases before the end of the year, though he said rate hikes are not imminent.

The MAS survey was sent out on Aug 11. It reflects the views of 24 respondents and is not the Singapore central bank’s own forecasts. 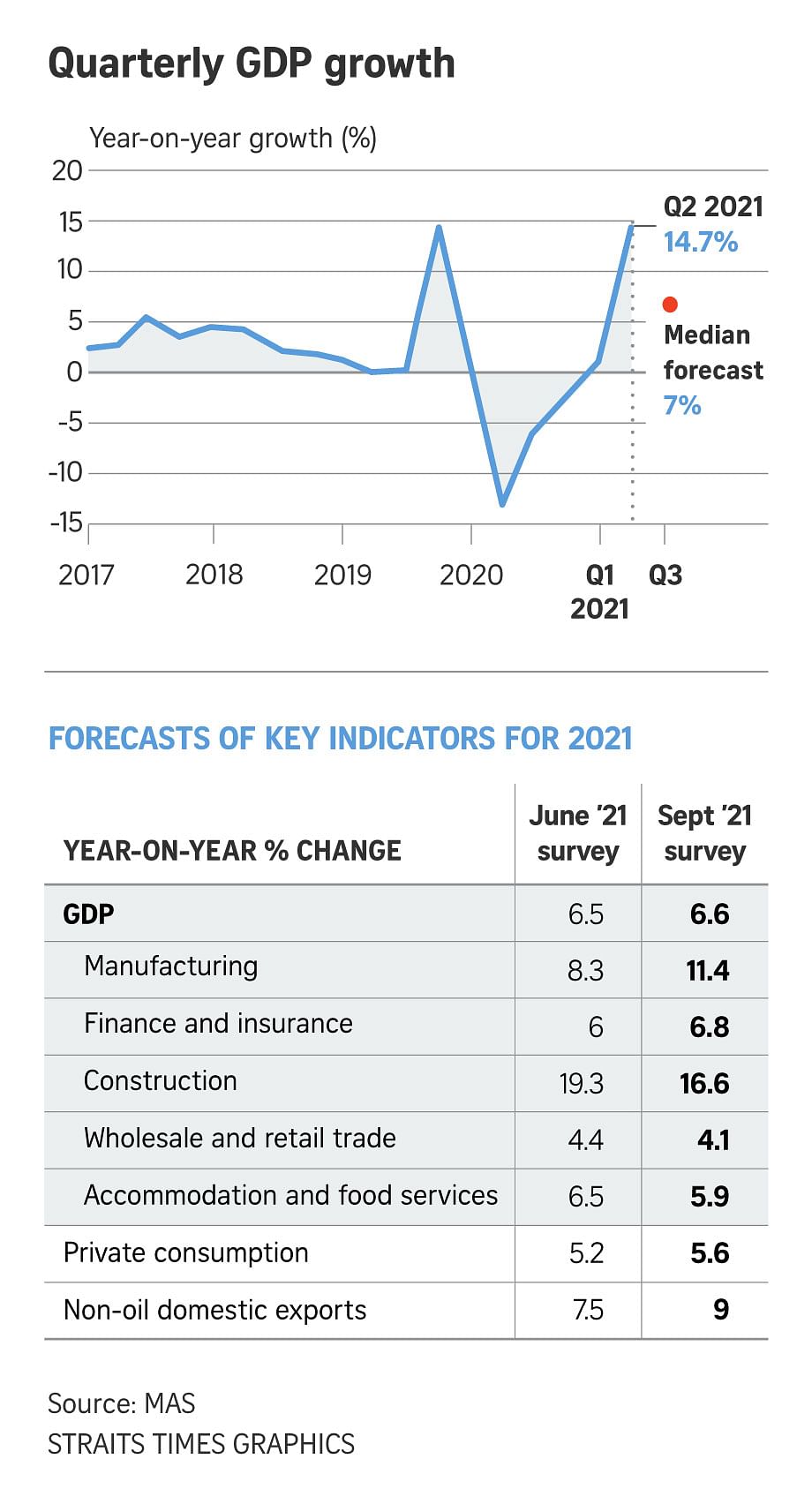 Join ST’s Telegram channel here and get the latest breaking news delivered to you.