Retail sales rose 0.3 per cent in October, in line with market predictions as higher spending on clothing and footwear offset lower spending in cafes, restaurants and takeaway food services.

Seasonally adjusted retail spending was $26.99 billion, up from $26.89 billion in September, according to Australian Bureau of Statistics data released on Thursday. However, the 0.3 per cent growth came from a downwardly revised 0.1 per cent rise in September. 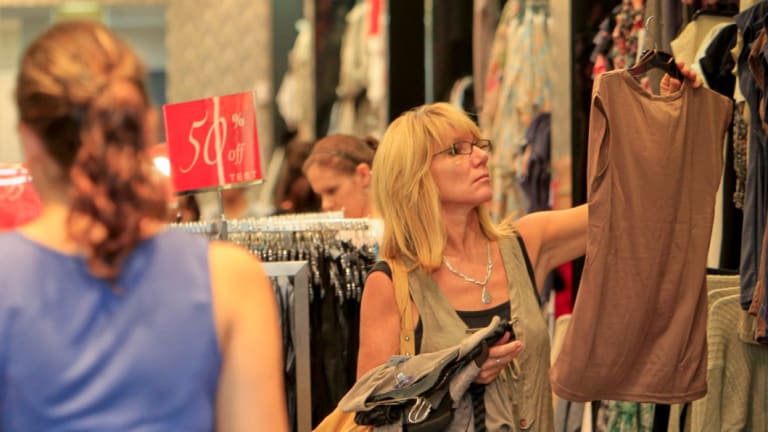 Online retail accounted for 5.9 per cent of total retail turnover in October, its highest level ever. A year ago, online sales just contributed 4.7 per cent to total retail.

This comes as traditional retailers are battling sluggish wages growth, mounting competition from online sellers including the first year of e-commerce behemoth Amazon in Australia and rising bricks and mortar rental costs.

The figures are a positive note following Wednesday's flatter-than-expected GDP data, where falling house prices, the wage stagnation and tighter lending standards were credited for a weaker-than-expected 0.3 per cent economic growth in the September quarter.

The annual retail sales growth rate held steady at 3.6 per cent with decent rises in food (0.2 per cent), household goods (0.6 per cent) and department stores (0.4 per cent).

Senior economist Marcel Thieliant from Capital Economics says private consumption may hold steady before Christmas, but warned the "downturn in the housing market will result in further weakness in consumer spending next year".

"Furniture has had a rebound this month. The housing market has gone soft so people are renovating and putting new furniture in their homes," he said.

"Over the last 12 months, there's not been a lot of joy in department stores, although we hope with Christmas around the corner we will see a resurgence," he said.

"For bricks and mortar stores the environment is particularly challenging. Competition from e-retailers is squeezing margins as well as volume of goods sold in stores," she said. "We expect this trend to continue into the medium term."

The loss of momentum in retail sales in New South Wales, where house price falls have been steepest, "is leaving us cautious about retail sales growth in the months ahead", she said.