LONDON (Reuters) – Sterling gave up some of its gains versus the dollar and dropped against the euro on Thursday after the Bank of England slashed its second-quarter growth forecast and flagged risks from global trade tensions and a no-deal Brexit. 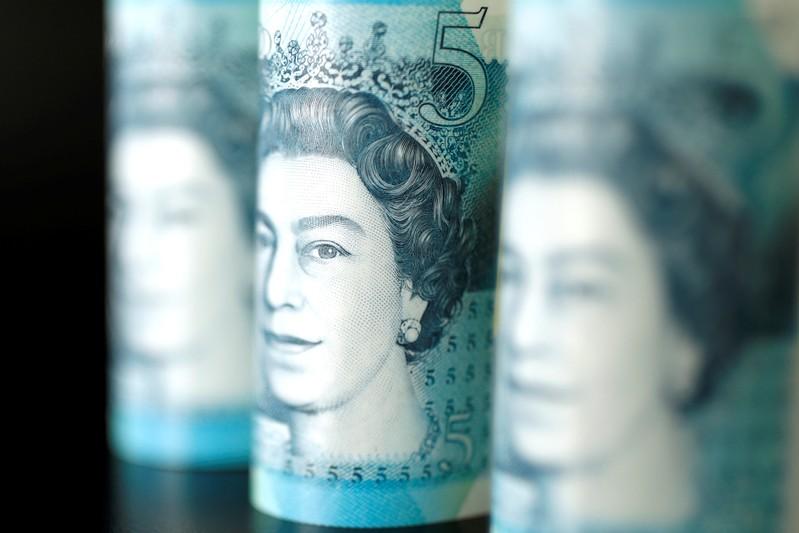 The central bank’s policymakers, as expected, voted unanimously to keep interest rates on hold at 0.75%. They stuck to their message that rates would need to rise in a limited and gradual fashion, so long as Britain avoids a damaging no-deal exit from the European Union.

The BoE message was far less dovish than the U.S. Federal Reserve and European Central Bank, which this week opened the door to rate cuts and more stimulus to counter any economic slowdown and rising trade tensions.

But policymakers did note a darkening global outlook and said Britain’s economy was now on track to stagnate in the second quarter, rather than grow 0.2% quarter-on-quarter as it had forecast last month.

The pound didn’t budge after the latest round of the Conservative party leadership vote, in which the number of candidates vying to become the party leader and replace Theresa May as prime minister was whittled down to three.

Brexit campaigner Boris Johnson scored the highest number of votes and remains the favourite to win.

Another vote later on Thursday will reduce the field to two candidates. Grassroots members will then decide who will become party leader, and the next prime minister, by the end of July.

Sterling has rallied in recent days, pulling away from five-month lows, as investors dumped the dollar following the Fed’s dovish policy meeting.

Against the euro, the British currency extended its losses and was last down 0.5% at 89.175 pence.

“On the whole the message is following the theme set by the bank’s peers in recent days by turning more dovish,” said David Cheetham, an analyst at online broker XTB.

Cheetham added that while the BoE had stopped short of delivering as strong a signal as other central banks, “it does seem increasingly likely that the next move will be an interest rate cut rather than a hike.”

Britain’s FTSE 100 extended gains to hit a day’s high, and was last up 0.5%. The exporter-heavy stock index tends to rise when sterling falls.

British government bond prices rallied, with September gilt futures jumping by more than 35 ticks to a session high and benchmark 10-year gilt yields falling to the day’s low of 0.809%, down more than 5 basis points on the day.

“I’ve seen nothing in what the BoE has been saying and doing that indicates any willingness to buck the trend from other central banks,” Kevin Gardiner, global investment strategist at Rothschild & Co, said before the BoE announcement.

“Unemployment is lowest since (19)74, inflation is at (the BoE’s) target, but they’re unlikely to stick out from the central banking crowd right now.”

Markets are not pricing for a BoE hike any time before August 2020.

The UK economy has shown signs of weakness in the face of prolonged uncertainty over Brexit but economic data have tended to move the pound only marginally as traders focus on the departure from the EU.