Even as Xi Jinping was promising China’s Communist Party’s national congress at the weekend that China would “resolutely win the battle” in key areas of technology, employees of technology companies in China and elsewhere were being told to down tools.

Dozens of the hundreds of executives and engineers with US citizenship or green cards who work in or with China’s semiconductor sector, many of them born in China, have been told by their employers – whether those are foreign or Chinese companies – to stop work while their employers seek clarification of a new US rule that bars US citizens and residents from supporting China’s advanced chip-making industry without a licence. 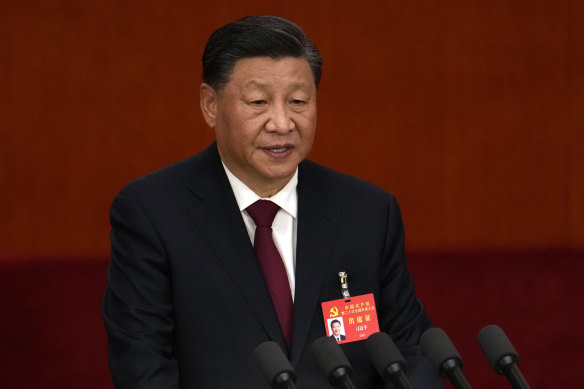 Xi Jinping vowed at China’s Communist Party’s national congress at the weekend that China would “resolutely win the battle” in key areas of technology.Credit:AP

When the US Congress passed the Chips and Science Act back in July, that was largely seen as a bill that supported and subsidised US domestic manufacturing of the advanced chips that are vital to the development of 21st Century industrial and defence technologies. It provided $US52.7 billion ($84.7 billion) in subsidies for domestic chip plants and semiconductor research and development.

A little over a week ago, however, a low-profile US Commerce Department agency, the Bureau of Industry and Security, issued a detailed list of rules, including what are effectively extraterritorial restrictions on exports of advanced chips, chip-making equipment and chip-making components to China where there has been any US input to the process. It was by far the broadest and most potent attempt to stymie development of China’s semiconductor industry.

The rules also seek to prevent China from accessing US-developed intellectual property by prohibiting US citizens, permanent residents and companies from continuing to work in or provide support for its advanced chip manufacturing and development programs.

China has spent more than $US100 billion of a budgeted $US150 billion to fast-track the development of a domestic chip-making industry. It is a critical component of its “Made in China 2025 program,” which set out China’s plans to dominate artificial intelligence, autonomous vehicles, next-gen information technology, telecommunications, advanced robotics and aerospace, among other technology-related sectors by 2049.

Despite the massive subsidies and national prioritisation, however, China badly lags the US, Taiwan, South Korea, Japan and Europe when it comes to the design of advanced chips, the tools for manufacturing them and the very expensive and sophisticated plants that manufacture them at commercial volumes.

Xi didn’t refer to the latest measures specifically in his address to the congress on Sunday but there was a strong focus on technology and a plan to accelerate innovation in areas important to “technology self-reliance.” A number of major projects that were of “strategic, big-picture and long-term importance” would be launched, he said.

The magnitude of the impact of the exclusion zone the US is trying to create around China’s tech sector can be seen in what’s happened to the value of listed companies in the advanced chip sector. According to Bloomberg’s calculations companies in the US, Taiwan, Europe, Japan and South Korea have lost more than $US240 billion of market value in a little over a week.

One US company, Nvidia, has said it will lose $US400 million of revenue in a single quarter because of the new rules.

That’s because, unlike previous attempts by the Trump and Biden administrations to target specific Chinese companies from accessing advanced technologies (the ban of Huawei was the classic example) the new rules effectively cover every Chinese entity. They, or their US or foreign suppliers, will have to apply for a licence to gain or provide access to advanced chip technologies. 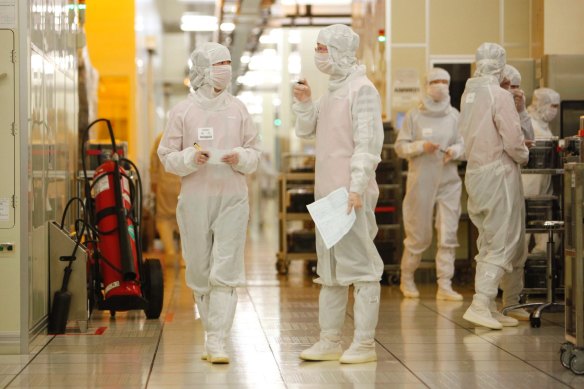 That fact that it has spent so much already but hasn’t yet succeeded in developing a self-sustaining domestic industry (amid massive waste and alleged corruption) underscores what a blow the US move is to China’s ambitions.Credit:Bloomberg

If the US strategy does prove effective – and the response of a wide range of non-Chinese companies operating in the sector in freezing dealings with China suggests it could be – it would cut China off from the critical building blocks of most 21st Century technologies.

While it is still able to use older chip designs and chip-making technologies it would be left well behind the US and its allies in the battle for technology supremacy. That fact that it has spent so much already but hasn’t yet succeeded in developing a self-sustaining domestic industry (amid massive waste and alleged corruption) underscores what a blow the US move is to China’s ambitions.

That pre-supposes that countries with key roles in the complex semiconductor ecosystem like Taiwan, South Korea, Japan and the Netherlands (where the most advanced chip-making equipment is manufactured) will fall into line with the US despite limited consultation before the US announced its new rules.

Beyond its geopolitical leadership, the US dominance of chip design and the design of chip-making tools does, however, make it a very influential player with leverage within that ecosystem.

China’s chip industry was shocked by the new US rules. More than 300 participants from the sector took part in a virtual meeting organised by the China Semiconductor Industry Association (CSIA) late last week to discuss how they might respond to the US actions, which CSIA has said violates long-standing principles of fair and non-discriminatory practices in the industry.

It has also said there was little prospect in the new environment of Chinese companies gaining access to the most advanced chips and has urged the US to reconsider measures that it says will harm the global semiconductor industry and impact “countless’ downstream sectors and “millions” of workers and professionals.

If the US strategy does prove effective – and the response of a wide range of non-Chinese companies operating in the sector in freezing dealings with China suggests it could be – it would cut China off from the critical building blocks of most 21st Century technologies.

Having developed a way to decouple China from the global sector and complicate and delay, if not completely stymie, both its industrial and military ambitions, it is difficult to see the US backing down unless there is a revolt by its own allies. There is bi-partisan support in the US for the Chips Act, a tougher stance on China and a more comprehensive decoupling of China’s economy from the West.

Biden administration officials have referred to technology export controls as a new strategic asset for the US to impose costs on adversaries after imposing stringent sanctions on technology exports to Russia in response to its invasion of Ukraine. US national security adviser Jake Sullivan has said those sanctions had forced Russia to use chips taken from dishwashers in its military equipment.

The relationship between the US and China is increasingly adversarial as China continues to openly state its ambition of toppling the US from its position of international economic and military dominance, so the US has now deployed its new strategic asset even though there might be considerable blowback from that decision for its own companies and citizens and those of its allies in Asia Pacific and Europe.