Russia’s pledge to reduce military activity around Kyiv, as part of what it calls “de-escalation”, has rightly been met with scepticism in the West, though sadly not nearly enough.

The move has prompted talk at the highest levels about whether sanctions should be lifted if Russia retreats and commits to peace. The possibility of sanctions removal was first raised by Antony Blinken, US secretary of state, a fortnight ago, on the basis that Vladimir Putin agreed to an “irreversible” withdrawal from Ukraine. 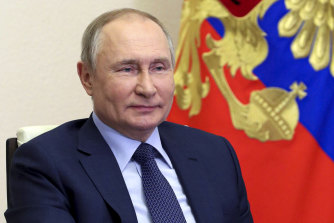 The Russian economy is recovering after an initial tumble.Credit:AP

Then in an interview last weekend, Britain’s foreign secretary Liz Truss said the West could relent if Moscow withdraws and commits to “no further aggression”. This is naive in the extreme and suggests America, Europe and Britain have learnt nothing about Russia’s psychotic regime. Have they forgotten what two decades of appeasement achieved?

Putin played the West for fools right up until the invasion. Even now, Emmanuel Macron continues to pander to Russia’s warmongering leader with zero to show for nearly 20 phone conversations and a little tête-à-tête in Moscow.

Indeed there is a strong argument for doing the opposite – instead of lifting sanctions, the international community should be preparing to hit the Kremlin with a new round of even more punishing measures, not least because the current ones are clearly losing their effectiveness.

The sanctions that were imposed on Russia at the end of February were unlike anything seen before in terms of speed, scale and Western collaboration. But they certainly couldn’t be called exhaustive and the impact has clearly waned.

The Russian economy has not been crushed despite all the excitable predictions from analysts and commentators. It suffered something akin to a financial heart attack and though a full recovery will take some time, it hasn’t proved fatal and there are signs it is already on the mend thanks to the decisive action of highly regarded central bank governor, Elvira Nabiullina.

The Russian stock market has reopened after a month-long deep freeze.

A temporary stop on equity sales by non-residents, along with a short-selling ban and a short trading window, was introduced. Although there are obviously questions about how sustainable such interventionary measures are, a crash was averted.

Russia’s banking system has stabilised. Measures such as capital controls and freezes on foreign exchange deposits have helped to prevent a run on the country’s banks.

The West needs to leap into action, pressing home its advantage with a new round of sanctions that completely devastate the Russian economy, starting with a full energy embargo. Without that sanctions will ultimately fail.

Helped by a doubling of interest rates and a ban on residents transferring money out of Russia, the rouble has staged a strong rally. After slumping as much as 33 per cent against the US dollar the day after Russia’s invasion, it is now close to pre-war levels of 85 to the dollar. It might have been a nice soundbite but the rouble has not been “turned to rubble” as Joe Biden declared last week in Poland.

Much of the recovery is artificial but as long as oil and gas receipts continue to flood into the country, Russia can keep rebuilding its hard currency reserves and weather the storm.

“Self-sanctioning” in the shipping industry has been a resounding failure. Oil tankers continue to arrive in Russian ports. Traffic in March has been only slightly lower than it was a year ago, and is higher than it was during the same month in 2016 and 2015, according to research from the Institute for International Finance. Even when the discount on Russian crude is factored in, oil revenues are near record levels, the IIF says.

That’s not to say that sanctions have been toothless. Goldman Sachs is forecasting a 10 per cent downturn in Russia this year, while Barclays predicts a 12.4 per cent slump. But while Barclays expects another 3.5 per cent decline in 2023, Goldman thinks growth will have returned already with GDP expanding by 2.4 per cent and has pencilled in a record current account surplus of $US200 billion by the end of the year. 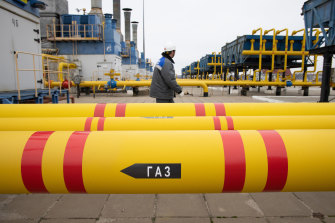 Europeans are worried a war could choke off natural gas supplies in the middle of winter, when they are needed most.Credit:Bloomberg

The West needs to leap into action, pressing home its advantage with a new round of sanctions that completely devastate the Russian economy, starting with a full energy embargo. Without that sanctions will ultimately fail.

Germany could withstand the shock. Robert Habeck, its own economic minister, has admitted that it would at least be able to make it through the summer. It is just too afraid to inflict further hardship on the German people, but if Lithuania and Poland are prepared to then why shouldn’t Europe’s biggest economy? They are even more dependent on the Kremlin’s oil and gas.

It may not come to that, of course, if Putin follows through with a threat to turn off the taps because the West refuses to meet Russian demands to pay for gas in roubles.

There also needs to be a widening of the ban on Russian banks using the Swift payments system. Just seven have been cut off from using it, and of the five biggest, Sberbank is the only one that has been shut out.

What else can be done? Wally Adeyemo, the US deputy Treasury secretary, has talked about additional export controls – some experts advocate for a full commodities ban or at least a broader raw materials embargo – and Volodymyr Zelensky has called for a trade and shipping blockade, something Adeyemo has refused to rule out. There should also be punishment for Western companies that continue to do business in Russia.

But as things stand, if the price Putin was meant to pay for his invasion was the crippling of Russia’s economy, then sanctions have undoubtedly failed.