Home » Economy » ‘Through the roof’: Wheat prices could surge 50pc due to Ukraine crisis

Australian wheat growers have been told prices could surge by up to 50 per cent in coming months, as the Russia-Ukraine conflict restricts supply of the grain into key Middle East and North African markets.

Russia and Ukraine together produce 30 per cent of the world’s wheat exports. But the Putin-led invasion will mean their usual customers from the Middle East and Africa, such as Egypt, Sudan, and Saudi Arabia, will likely opt to buy from Australian growers instead, who are already exporting record volumes to neighbouring South East Asian countries. 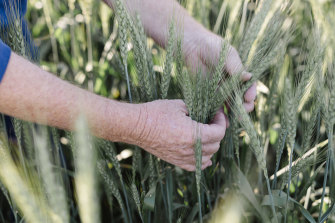 The price of Australian wheat is expected to shoot up as the Russia-Ukraine conflict squeezes supply for Middle Eastern and African buyers.Credit:Grace Quast

Ukraine’s ports have not yet been damaged by the blasts, but commercial shipping out of the country has been cancelled, he said. Russian ports remain operational. “But ships aren’t going to go there if it’s a war zone.”

“That supply that these buyers in the Middle East, Egypt, North Africa were expecting is gone,” Mr Maxwell said.

“If that supply chain situation doesn’t ease, that’s when they’ll start turning to Australia. Australia [has] the most secure and most reliable supply in the world at the moment.”

Demand for Australian wheat is expected to gradually increase the longer the conflict goes on. Global wheat prices, which have already risen by 20 per cent since the beginning of the year, “absolutely skyrocketed” last week as Russia’s invasion began, Mr Maxwell said.

Chicago wheat, the global wheat price standard, is trading at a nine-year high. “We saw [prices] jump around 7 per cent overnight [to $475 per tonne] just after the invasion.”

While farmers are bracing for volatility ahead, wheat price rises will likely manifest in earnest around June if the Russia-Ukraine crisis remains unresolved or worsens.

“The real crunch will be in four months,” ANZ Bank head of agribusiness insights Michael Whitehead told the Sydney Morning Herald and The Age. Russia and Ukraine’s wheat is yet to be harvested, but will be ready to be exported four months from now, he explained.

“If it’s blocked from world markets, and it looks like that’s going to happen – that’s when prices will really go up.”

Echoing Mr Whitehead’s sentiments, Rural Bank’s Mr Maxwell said prices would go “through the roof” if the conflict lasted through to July. “We’d expect 50 per cent increases or even more, which is saying something because we’re already pretty close to record prices.”

Domestically, Mr Whitehead believes Australian consumers won’t wear any of the higher costs. Grain that will go into products such as Australian bread and pasta will have already been purchased from the previous harvest, he said.

But Mr Maxwell noted that farmers were grappling with a raft of mounting input costs, including fuel, fertiliser, and farm equipment, which would then ripple out to Australian shoppers.

“When you factor in inflation, rising cost of fuel, and things like that, it does end up in higher prices on supermarket shelves.”

Brett Hosking, who is the chair of GrainGrowers, an industry body that represents Australian grain farmers, said there was a “little window of opportunity to take advantage of higher prices” but that Australian farmers were not rejoicing at the circumstances for the price rises.

“Not every country in the world that buys grain has the ability to pay the higher prices. The last thing we want to see is people go without food or not have the access to food that they need,” he said.

“That’s one of the really, really sad ramifications of higher prices.”