Home » Economy » We thank doctors for their COVID response. Why do we bash Philip Lowe?

The headquarters of Australia’s central bank is an office tower situated directly across from Australia’s oldest hospital. Sydney Hospital, in turn, backs out on to a leafy expanse of grass known as The Domain.

During the early days of the COVID outbreak, health officials warned Reserve Bank staff that the hospital and Domain could soon be the site of a temporary outdoor morgue, as hospitals around the country braced for an influx of COVID patients and deaths. 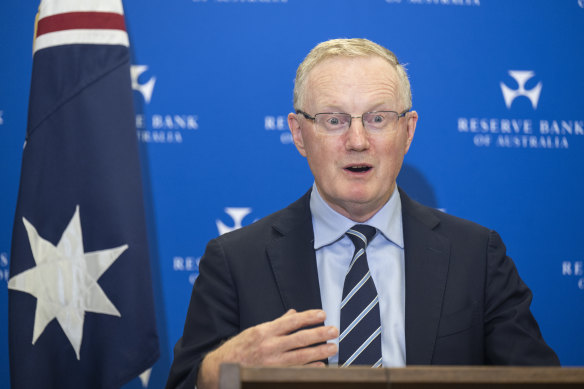 With similar scenarios playing out around the world, particularly in parts of Europe, it didn’t seem too far-fetched. So, as health authorities scrambled into action, Australia’s top central bankers decided to go hell for leather to do their job to sandbag the Australian economy from the threat of a jobless rate at 15 per cent plus.

In March 2020, the bank unveiled a four-part plan of attack, including a massive program of government bond buying, a facility to give cheap credit to banks, a commitment to keep the yield payable on three-year government bonds at an ultra-low level and, finally, the explicit use of a little known policy tool – at least in an Australian context – of so-called “forward guidance”. Forward guidance is when central banks give explicit guidance on the likely future path of interest rates in a bid to influence lending rates.

Taken together, the measures worked. Borrowing rates plummeted, stimulating credit, boosting demand and ultimately helping to stave off a devastating recession. As it turns out, neither the health nor the economic nightmare scenario played out. But while health authorities have been largely praised for their efforts, the RBA has suffered what it describes as “considerable reputational damage” from that now highly controversial final plank of its emergency plan.

Let’s get one thing clear: governor Philip Lowe never promised rates would not rise until 2024. But you could be forgiven for thinking he did, given media coverage of his remarks, which took his heavily caveated statements and turned them into “no rate rises til 2024”.

Lowe has now apologised to borrowers who took out loans thinking they did have his personal assurance rates would not rise until 2024, admitting: “We weren’t clear enough.” But is Lowe really solely to blame?

In ordinary times, Australians are used to hearing the more waffly type of “qualitative” guidance, meaning only general hints are dropped on future rate moves, and usually only after much cajoling and questioning from journalists. For the journalists who regularly cover Reserve Bank decisions, it’s a complex process of learning to read the tea leaves. In contrast, Lowe’s language during the crisis was like a double shot of espresso delivered straight into the veins.

If Lowe and Co are guilty of anything, I think it’s a degree of naivety about how the media would receive their bold – if heavily caveated – statements about future rate rises.

Did the bank set out to deliberately mislead the public about the likely path of future rate rises? A cynic would say so. To the extent people were, indeed, misled and did, in fact, borrow more, this helped prop up house prices and the economy. But I don’t think that was ever the explicit intent of the comments, which were more aimed at wholesale money markets.

Mortgages, after all, are 25 or 30-year long affairs, and a borrower who can’t afford a rate rise in 2022 probably couldn’t afford one in 2024 either and should never have got their loan. In which case, it is lenders, mortgage brokers and prudential regulators who should be apologising.

Of course, lessons should be learnt – and are being learnt – at the Reserve about how to use this particularly powerful policy tool in future shocks. In a recent internal review, the bank stated if it were to use forward guidance again in “very adverse circumstances” it would be much less specific and any time-based estimates kept to a much shorter horizon. Which seems wise.

In the meantime, it seems petulant that Lowe and Co should receive only brickbats for their efforts. Our economy did not burn to the ground, thanks in large part due to the RBA’s extraordinary efforts. We approach Christmas with an economy in full employment for the first time in half a century. Sure, paying a mortgage with interest rates 3 percentage points higher than you expected is tough. But it’s even tougher if you don’t have a job. And surely Lowe deserves a bouquet – or two – for that.

The Opinion newsletter is a weekly wrap of views that will challenge, champion and inform your own. Sign up here.

More from our award-winning columnists

An anxious nation: Mortgage stress, COVID burnout, extreme weather and the cost of living crisis – no wonder Australia’s status as the “lifestyle superpower of the world” is under threat – Nick Bryant

The future of democracy: Australia must learn from America’s descent into extreme inequality, which has led to deep discontent. It must also do more to civilise “social” media – the great amplifier of hate – Peter Hartcher

Behind the interview: Shane Warne may have been the greatest bowler legendary interviewer and cricket lover Michael Parkinson has ever seen, but he’s not his favourite interview – Peter FitzSimons