When the Federal Reserve reversed course and began lowering rates last summer, bank stocks were hammered as net interest margins would suffer as a result. The Fed continued with two more rate decreases before Chairman Jerome Powell indicated the central bank was finished with rate cuts, barring an economic surprise.

A rally in stocks, producing the best gain in the benchmark S&P 500 Index SPX, -0.29% in six years, boosted banks’ trading revenue. Banks’ shares went along for the ride.

This chart shows the S&P 500 banking industry group’s total return during 2019 compared to that of the S&P 500: 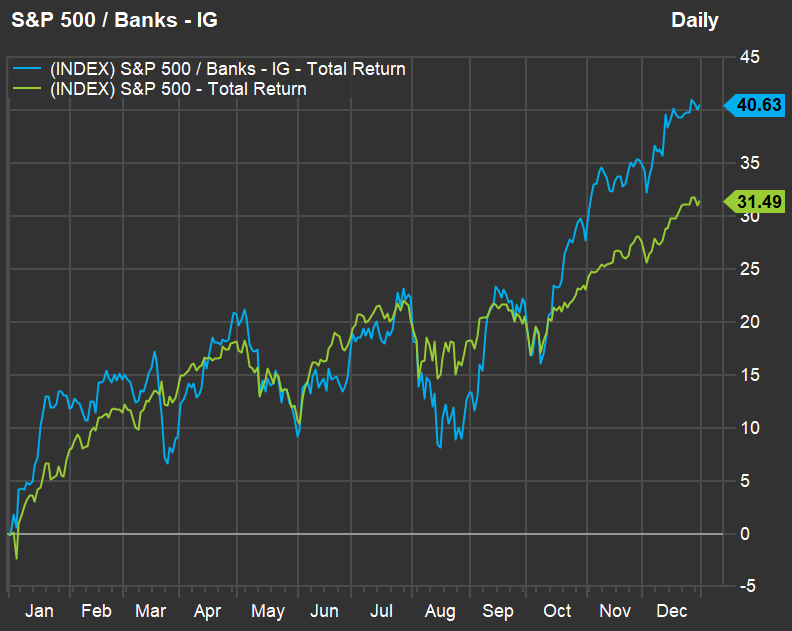 For the 12 large U.S. banks, analysts forecast half had higher earnings per share (EPS) and five had lower EPS. There is no comparison for Truist Financial Corp. TFC, -0.39%, the result of a bank merger late last year.

For the entire financial sector of the S&P 500, beyond the big banks, analysts polled by S&P Global Market Intelligence expect fourth-quarter earnings per share to increase 10.5% from a year earlier. That is the second-highest estimate among the 11 sectors. (Utilities are expected to see an 11.8% increase in EPS, with five sectors expected to suffer earnings declines.)

”For the fourth quarter, we forecast net interest margins (NIM) to be down 4 basis points [from the third quarter] for the median Universal Bank,” Keefe, Bruyette & Woods analyst Brian Kleinhanzl wrote in his team’s earnings preview for the nation’s four largest banks.

He expects continued pressure on margins during 2020. But following a “modest” decline in deposit costs during the fourth quarter, the KBW analysts expect the trend to accelerate, leading to a flattening of net interest margins in 2021.

Deutsche Bank analyst Matt O’Connor expects fourth-quarter NIM to be down “meaningfully,” by about 6 basis points for large banks, but for margins to be flat or down slightly in the first quarter.

For small-cap and mid-cap banks, Jefferies analyst Ken Usdin is upbeat, writing in a report that net interest margins either bottomed in the fourth quarter of 2019 or will do so in the first quarter of 2020.

Back to the big banks — here are expected fourth-quarter EPS results for the largest 12 U.S. banks by total assets, among analysts polled by FactSet, compared with actual results for the previous and year-earlier quarters:

Truist Financial, the eighth-largest U.S. bank by total assets, was formed Dec. 9 when BB&T of Winston-Salem, N.C., completed its acquisition of SunTrust of Atlanta. Total assets for the combined banks as of Sept. 30 are shown on the table. The estimates for fourth-quarter and combined third-quarter earnings per share come from Jefferies’ Usdin.

Even though investors have shown great confidence that the industry will shake off the effects of the Fed’s interest-rate cuts, only four of the 10 banks are expected to show sequential improvements in EPS, while five are expected to post an improvement year-over-year.

And those EPS numbers are continually boosted as the banks deploy excess capital by repurchasing shares, which lowers the share counts.

Deutsche Bank’s O’Connor expects a 3% year-over-year increase in expenses for the large banks, although the estimate drops to range of 1% to 2% if “lumpy items” and merger costs are excluded.

Based on Federal Reserve data, O’Connor expects average loans to be about 5% higher than a year earlier.

The year-over-year comparisons for trading revenue should be positive, because of comparisons to the dismal fourth quarter of 2018, when U.S. stocks declined across the board.

Kleinhanzl of KBW expects the following for the five largest investment banks’s trading revenue in the fourth quarter:

The estimates underline how variable trading revenue can be.

“The quarter-over-quarter results are a better comparison across the group,” Kleinhanzl wrote. He said an estimated trading-revenue drop of 15.8% is in line with a “typical” seasonal decline.

He also expects a difficult quarter for investment-banking results, especially compared with the fourth quarter of 2018, which was a “record quarter.”

Among the largest U.S. banks, the ones that probably get the least media coverage are the trust and securities-custody specialists, Bank of New York Mellon BK, -1.83% and State Street STT, -1.48%. Those two stand out on the first table, above, because they are expected to show significant year-over-year increases in EPS.

Usdin of Jefferies upgraded State Street to “buy” from “hold” on Jan. 7, writing in a report that trust banks “enter 2020 with the best backdrop in some time.”

State Street, in particular, ought to benefit from a higher exposure to emerging-market equities, he said.

Kleinhanzl called State Street KBW’s “top pick for 2020” in the large-cap banking space, because the bank is “expected to have the best earnings growth as we look out to 2021.”

Here’s a summary of analysts’ opinions of the dozen big banks:

Following the major rally for the group, the analysts’ price targets are modest. But the target prices don’t include dividends. The dividend yields for most of the group are attractive, especially when compared with 10-year U.S. Treasury bills TMUBMUSD10Y, +0.00%, which are yielding 1.84%.

Here are dividend yields and forward price-to-earnings ratios for the group: