Home » Industries » Cybersecurity earnings: With midterms ahead, demand — and stock prices — are high

Cybersecurity companies appear to be benefiting from fat IT spending budgets fueled by tax cuts and fears of hackers, but a healthy run on stock prices in the sector sets a high bar this earnings season.

Cybersecurity products and services have been in high demand after high-profile hacks like that against Equifax Inc.EFX, +0.09% last year, and that demand shows little sign of slowing down. A recent Morgan Stanley survey found that CIOs rated security spending as the second most defensible IT project in case of an economic downturn, with the most defensible being digital transformation initiatives.

Earnings Watch: 35% of S&P 500 companies set to report in a crazy week

While a relatively small part of its business, International Business Machines Corp. IBM, +0.47% last week provided a glimpse of how robust demand was, reporting that its security products revenue surged 79% from a year ago to top $1 billion in quarterly sales for the first time.

“Cloud computing remains a top priority, [and] will be a tailwind for third-party well-positioned security vendors,” Morgan Stanley analysts wrote, making specific note of companies like Proofpoint Inc. PFPT, -2.88% , Cisco, Zscaler Inc. ZS, -3.79% and Sophos Group PLC SOPH, +2.07% . Proofpoint is scheduled to report earnings Thursday after the bell, and analysts surveyed by FactSet expect earnings of 17 cents a share on revenue of $169.5 million.

Goldman Sachs, earlier in the month, said cybersecurity stocks presented a tactical opportunity ahead of the November midterm elections. In Goldman’s survey, cybersecurity is the IT area where most CIOs expect to boost spending within the next 12 months. The firm also pointed out that exposure to cybersecurity stocks at mutual funds is at its lowest since 2012, even though those same funds are heavily weighted toward tech stocks, leaving room for those funds to start loading up. 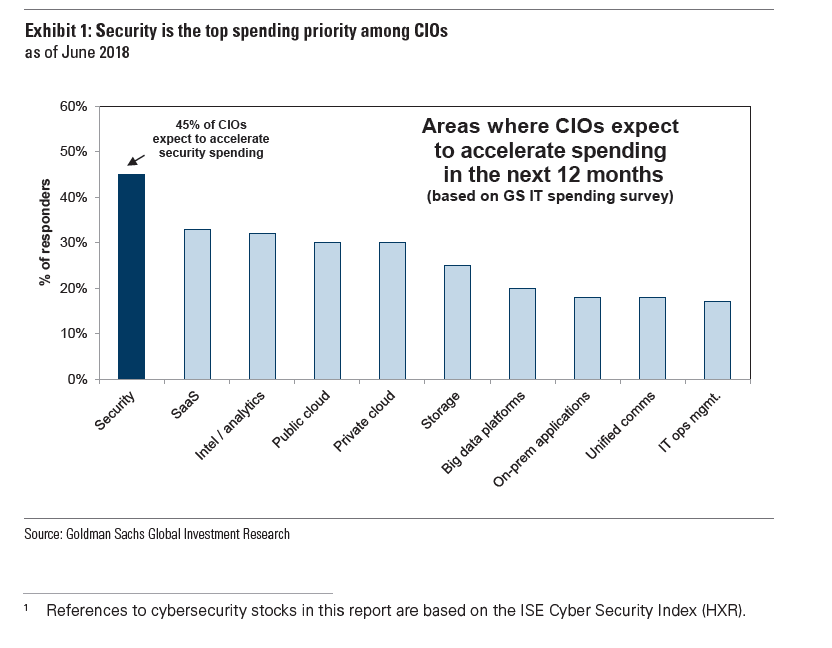 One drawback, however, is that the sector is continually in flux, Goldman said, and has several startups like Palantir Technologies and CrowdStrike Inc. waiting to disrupt established players.

“Cybersecurity product cycles tend to be short as hackers find new attack vectors, architectures are shifting because of the move to hybrid computing, and technology leaders today face risk of disruption from a well-funded field of private companies,” Goldman said.

“After 3 quarters of stagnant stock performance and 4 quarters of disappointing guidance from Check Point, we believe it is now time to get constructive on the name again,” BTIG analyst Joel Fishbein wrote in upgrading the stock to a buy rating Tuesday with a target of $120.

“Ultimately, Check Point is a solid business with incredible operating margins (~53%) and an attractive [free cash flow] yield (~7%) that has performed out of step with what has been a great year for the broader cybersecurity sector,” Fishbein said.

Check Point is expected to report earnings of $1.31 a share on revenue of $461.4 million, according to analysts polled by FactSet.

Less a fan of Check Point is UBS analyst Jennifer Swanson Lowe, who called the company the “most contentious” among her neutral picks because “our checks haven’t shown definitive signs of sales cycle, sales execution, and demand improvement.”

See also: What will chip makers say about the trade war?

Lowe said the bar is set high for cybersecurity company outlooks this quarter, given the strong performance in stock prices.

“As such, we think straightforward 2H setups, clean fundamentals, and compelling valuation will matter for continued share price momentum and where we see [ForeScout Technologies Inc.] screening most favorably,” Lowe said

Lowe said ForeScout FSCT, -1.49% is the best-positioned of her buy picks because of a number of $10-million-plus government deals during the quarter. Lowe also has buys on Fortinet Inc. FTNT, -2.15% and CyberArk Software Ltd. CYBR, -3.34% going into earnings, and neutral ratings on FireEye Inc. FEYE, -3.35% and Symantec Corp. SYMC, -1.72% .

In other research, UBS analyst Fatima Boolani said that the demise of perimeter security firewalls is not going as quickly as feared even with the rise of cloud-based security, which should be good for companies like Palo Alto Networks, Fortinet and Check Point.

“Plainly said, with an estimated physical estate of 10M world-wide, firewalls are entrenched network access enforcement mechanisms, which are likely to remain a core architectural component of cybersecurity strategy for years to come,” Boolani said.