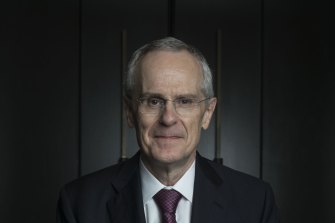 Mr Sims said the deal was approved because 86 400 was not particularly unique or disruptive to the banking market and should not send a signal that all similar mergers would be waived through.

“There will be transactions we will stop, I can think of a number of companies that are not appropriate to mention, that we would block,” Mr Sims said.

Mr Sims said while 86 400 was well known and popular with customers, its technology and service offering was replicated across the fintech industry.

“Their technology is basically white-labelled software. Others can do it and are doing it. So in the end, we didn’t figure it was making enough of a difference to the market to amount to a substantial lessening of competition.”

86 400 is the first neobank to be fully acquired by a big four bank, after regulations were loosened in 2019 that saw a number of independently owned deposit-taking institutions enter the market.

The fintechs promised to shake up the banking industry, but neobank Xinja quickly became the first Australian bank to return all customer deposits last year after it struggled to raise the necessary capital to operate lawfully.

The Australian Prudential Regulation Authority (APRA) has now raised the bar for new entrants to ensure these companies have sustainable business models. Mr Sims said neobanks were essential to stimulating competition in banking and could represent a legitimate threat to the big four’s incumbency if they chose to partner with second tier banks.

“The message I’d like to convey here is that firstly we look at every deal on its merit. To fintechs themselves, the approval process will be a lot shorter if you decide to sell out to a second tier bank rather than the big four,” he said. “We are going to take a much closer look at acquisitions by the big four banks.”

NAB’s deal with 86 400 follows a number of partnerships between the big four banks and fintechs, including Westpac’s deal with SocietyOne and Afterpay and the Commonwealth Bank’s partnership with buy now, pay later provider Klarna.

APRA chair Wayne Byrnes shot back at speculation the neobank sector was undermined by deals with major banks, adding the regulator was now considering more than 12 applications from aspiring operators.

“With apologies to Mark Twain, let me suggest their death has been greatly exaggerated,” Mr Byres told the Australian Financial Review’s banking summit.

Volt founder Steve Weston said his company was not actively pursuing ownership by a big four bank, but would not rule out the possibility of a merger down the track.

“I think it’s fair to say that all industry players are looking at each other and saying how do they grow? What do they do next? Acquisitions, merging, partnering is certainly an attractive option.”

Mr Weston said neobanks ultimately had to make informed decisions about “what is best for shareholders and the company” but new entrants needed to prioritise developing sustainable business models over finding a takeover partner.

“Rather than treading the tried and true path of acquiring customers through marketing, we’re seeing the evolution of the business model,” he said. “We have built technology that is unique.“