For more than 80 years Ross Carter’s family has been making and selling Christmas plum puddings. But the 2021 batch was almost brought undone by a lack of one simple but crucial item – cloth.

Dr Carter had already survived several COVID-induced shortages, but he relies on an international supplier for the material used to wrap Ray’s Traditional Home Made Plum Puddings, the desserts his family has made in Melbourne for generations. 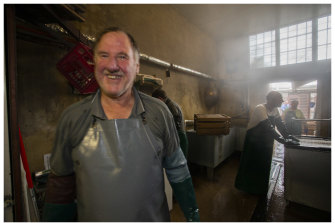 Ross Carter at his happiest on the floor with his family as they gather every year to make Ray’s Traditional Home Made Plum Puddings.Credit:Meredith O’Shea

While he buys almost everything locally, there are a few items that aren’t made in Australia: “99.8 percent of our product is grown in Australia, it was that last 2 per cent that was causing me issues, about 10 cents worth of the total product was putting me out of business.”

There was also a 12-week wait for bicarb soda, and even the clips used to seal the pudding bags were difficult to get.

“I had about five critical moments,” said Dr Carter, who is also a veterinarian.

The business starts the process of making the puddings in October, but the material they wrap them in didn’t arrive until December 10, when the order Dr Carter made in February finally arrived. Since then it’s been all systems go.

“We are really lucky to still be in business,” he said. 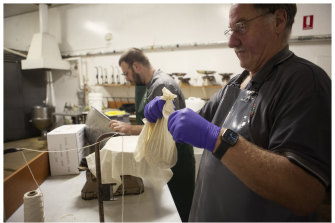 Ross Carter and son Duncan pick and gather cloth to tie the pudding. Ross has been tying puddings for more than 50 years and Duncan is following in his footsteps.Credit:Meredith O’Shea

Dr Carter’s family have been making and selling Christmas plum puddings since the 1930s.

His grandparents started the tradition by selling the puddings at their cake shop in Moonee Ponds. In 2021, the recipe remains largely unchanged.

Two thirds of the company’s staff are family members, and Dr Carter’s son is the fourth-generation to work with the yearly plum pudding operation, now based in Essendon North. 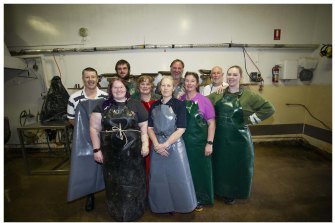 The team of family and lifelong friends at Ray’s Traditional Home Made Plum Pudding factory in Essendon North. Credit:Meredith O’Shea

“We don’t know any different, this is just what you do in our family at this stage,” he said.

The puddings are still made by hand – except for one machine in the factory used for mixing shortening and sugar.

They start the lengthy pudding-making process by mixing all the dry ingredients, including the flour and fruit, then adding water and vinegar, and mixing again by hand.

The mixture then gets tied in a cloth and weighed before it is boiled for between two and five hours, depending on the size of the pudding. 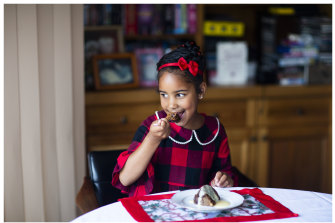 “You then have to dry the cloth a little bit so that you can pack it without problems,” Dr Carter said. “Then seal in a plastic bag to keep the freshness, cool it down overnight and the next day, and then it is ready to pack and go out to the shops.”

He said the secret to a perfect pudding is using the freshest and best ingredients: “I have a bit of an advantage over people’s mum and dad making pudding at home because I have access to the top quality fruit from Mildura.”

Fascinating answers to perplexing questions delivered to your inbox every week. Sign up to get our new Explainer newsletter here.