Afterpay and its rival Zip Co will face government regulation in Britain after an official review into buy now, pay later payment (BNPL) providers said the sector was putting some consumers at risk of financial harm.

Use of BNPL products surged fourfold in the UK during 2020, prompting a review for the Financial Conduct Authority (FCA) which found the sector’s emergence gave consumers an alternative to high-cost credit, but there was an urgent need to protect consumers through regulation of the industry. 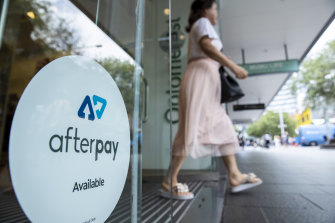 Afterpay’s UK operations will face regulation after a review warned of the potential for consumer harm.Credit:Fairfax Media

The review, which comes amid predictions BNPL operators will also ultimately face tighter regulation in other markets, said more than one in ten UK customers of major banks using BNPL products were already in arrears.

Chair of the review Christopher Woolard said that “most of us will use credit at some point in our lives. So, it’s vital that we have a fair market that works for everyone. New ways of borrowing and the impact of the pandemic are changing the market, with billions of pounds now in unregulated transactions and millions of consumers at greater risk of financial difficulty.”

Afterpay, which trades under the name Clearpay in the UK, said it welcomed the announcement and it would work with regulators. “It has always been Clearpay’s view that consumers will be best served by products designed with strong safeguards and appropriate industry regulation with oversight from the FCA,” said Clearpay’s executive vice president of public policy, Damian Kassabgi.

“New ways of borrowing and the impact of the pandemic are changing the market, with billions of pounds now in unregulated transactions and millions of consumers at greater risk of financial difficulty.”

Zip launched its UK business in December, and it has said the market is a strategic focus for the company. Co-founder Peter Gray said the review was a positive step for the industry, and it would work with UK authorities.

“As a global business, Zip is comfortable operating in a regulated environment and has always had a strong focus on responsibility, affordability, fairness and financial wellbeing,” Mr Gray said.

“We will work collaboratively with the FCA and the industry to build on the customer protections we already have in place, while continuing to develop products that offer a positive alternative to high cost credit for our customers.”

Klarna, an unlisted Swedish BNPL business which is 5 per cent owned by the Commonwealth Bank, is also a major operator in the UK.

The move comes as amid a wave of expansion in the BNPL sector, in which lenders offer instalment loans to consumers, charging merchants or consumers a fee for the service.

BNPL operators in Australia have avoided regulation so far, but the UK decision is likely to reignite the local discussion about whether the sector will ultimately be brought into the regulatory net.

Chief executive of payments consultancy McLean Roche, Grant Halverson, said Australia had a higher proportion of customers using BNPL products than the UK, noting that authorities in Europe and Canada were also looking into the issue.

The Reserve Bank and the Australian Securities and Investments Commission have opted against regulating BNPL products so far, but Mr Halverson predicted the local sector would eventually face regulation. “The investors will start asking questions if nobody else will,” Mr Halverson said.

RBC Capital Markets analyst Tim Piper said the changes could make it slower for customers to sign up for credit, but he did not think regulation would be a “roadblock to continued strong growth” in the BNPL sector.