Home » Markets » Airbnb CEO: 'We're not pulling on the brakes, we're stepping on the gas'

New York (CNN Business)This summer has long been forecast as a potential boom time for the travel industry. Retailers and economists have been talking a lot about how consumers are starting to buy less stuff and are instead spending more on vacations and other experiences.

But that’s not the story the travel stocks themselves are telling. Worries about inflation and a resurgence in Covid cases in China are starting to take their toll.
After a hot start to the year, shares of major hotel chains including Hilton (HLT), Wyndham (WH) and Hyatt (H) have tumbled on economic jitters and travel slowdown concerns. All three stocks are down nearly 20% this year.

Major airline stocks, which have held up better than the broader market this year, have been losing altitude lately. Shares of American (AAL), United (UAL), Delta (DAL) and Southwest (LUV) all fell sharply Tuesday and are now in the red for 2022.

And now Airbnb is trading near an all-time low, more than 50% below its IPO price from late 2020. Vrbo owner Expedia (EXPE) has lost more than a third of its value in 2022.
Is this a bad sign for the summer travel season and the economy? It’s still too hard to tell. 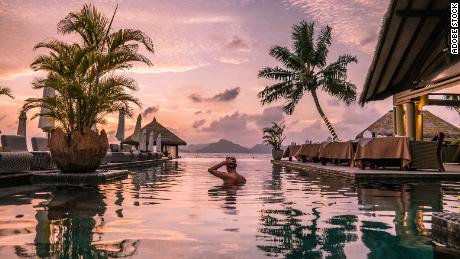 It’s worth remembering that last year’s second and third quarter earnings and revenue for leisure companies was incredibly strong as consumers started to worry less about Covid. Many Americans tired of sheltering in place in 2020 went back out and traveled as Covid cases dropped during what was dubbed the “Hot Vax Summer.”
So companies in the travel business may be facing difficult comparisons to last year’s results. Add inflation pressures into the mix, and the year-to-year contrast could be even more jarring.

No more ‘revenge spending’ due to inflation?

Analysts at Morning Consult said in a report earlier this month that “services like air travel … registered modest spending declines as robust demand faltered slightly amid eyepopping prices.”
The Morning Consult analysts further noted that despite “strong pent-up demand,” the travel sector “could be subject to spending pullbacks if prices for flights and hotels continue to skyrocket.” Indeed, the government reported earlier this month in its Consumer Price Index inflation report that airline fares soared 33.3% over the past 12 months as of the end of April — the biggest year-over-year increase since December 1980.
Labor shortages could hurt the travel sector this summer too, especially at airlines. 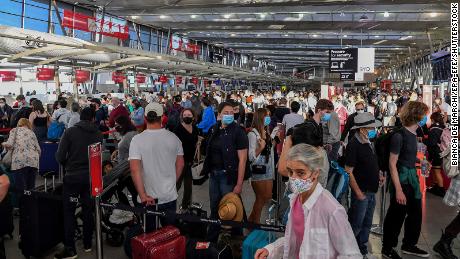 “Demand for seats on planes is increasing but supply is constrained, leading to higher ticket prices for consumers,” said Christopher Raite, senior analyst at Third Bridge, in a recent report.
“If airlines could staff their aircraft more reliably, there would be more flights available, but the labor situation is challenging and adding to inflationary pressures in the industry,” he added.
Raite also pointed out that “wage and fuel cost pressures” are a major issue for the airlines and that could “cap the profit recovery across the entire industry despite soaring revenue.”
Jet fuel prices have more than doubled over the past year, according to data from the International Air Transport Association, an industry trade group.

For their part, travel industry executives remain cautiously optimistic about the summer, even as inflation and other macro concerns are an issue.
“Despite the usual caveats for Covid, rising inflation to worry about and of course the geopolitical situation, the pent-up demand that’s out there for travel seems to be outweighing anything the market can throw at it,” said Peter Kern, CEO of Expedia during an earnings conference call with analaysts earlier this month.
“We continue to be feeling very good about a summer recovery that should be very robust,” Kern added.
And one travel CEO even seemed to relish the rising prices.
“Inflation is an ugly word, but … there’s a pretty side to it, which is pricing power,” said Norwegian Cruise Line CEO Frank Del Rio during the company’s earnings conference call with analysts this month. Del Rio said that the cruise industry should be able to raise prices without hurting demand.
He even went as far as to predict that 2023 could be a record year for the company, if momentum continues to build.

Still, he did have a caveat: demand should hold up only as long as there is an “absence of more black swan events,” referring to the phrase investors use to describe highly unpredictable occurrences.
The pandemic, supply chain disruptions, the war in Ukraine and inflation at its highest level in four decades can all be considered black swans. That’s why Del Rio also said, “we’ve had more black swan events in the last two years than I think we’ve had in the prior 20.”
Source: Read Full Article